In praise of older books: The Songlines by Bruce Chatwin (1987) 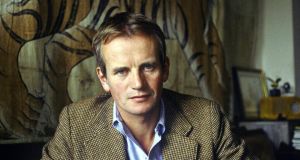 Bruce Chatwin goes to the Red Centre, Australia’s geographical and emotional heart. He’s looking for the Songlines, the invisible pathways which criss-cross the continent. In Alice Springs, he meets Arkady Volchok, who explains that the Aboriginal creation myths “tell of the legendary totemic beings who wandered over the continent in the Dreamtime, singing out the name of everything that crossed their path. . . and so singing the world into existence”.

Chatwin remembers a book he read as a child. Photographs of an Aboriginal family, “lean, angular people and they went about naked.” Now he is here to find them and to understand their way of knowing. Not easy for a man born, raised and educated in the European tradition. He knows that the Aboriginal concept of their geographic world is at odds with the Aussies’. So far the Aussies are winning.

Chatwin meets the drunks and the destitutes, destroyed by the loss of their sense of self

But Arkady is here to help. A new railway line is to be laid from Alice to Darwin. The sacred sites must be identified. The railway company wants to ensure that the project proceeds without “a kind of rumpus”. A rash task, Arkady said, “if you look at it [the Aboriginal] way the whole of bloody Australia’s a sacred site.”

Chatwin struggles to understand. “ ‘So the land,’ I said, ‘must first exist as a concept in the mind? Then it must be sung? Only then can it be said to exist?’ ” It reminds him of Bishop Berkeley’s refutation of matter.

With Arkady by his side, Chatwin sets out to explore and learn. Titus Tjilkamata of the Land Rights Movement tells him “there is no such person as an Aboriginal . . . there are Tjakamarras and Jaburullas and Duburungas like me.” Chatwin meets the drunks and the destitutes, destroyed by the loss of their sense of self. As we read on we realise the impossibility of Chatwin’s project. The written word cannot express this world. But we read the book with pleasure and fascination. We read it to learn how little we know.