What does a ‘perfect’ performance even mean in the context of Beckett, that poet of failure? 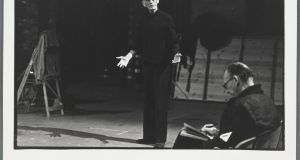 Beckett rehearsing Endgame with director Walter Asmus at the Riverside Studios Theatre in London in May 1980. Photograph: Chris Harris

In July 2012, at the performance workshop of the second Samuel Beckett Summer School, I sat in the Players Theatre and watched Rosemary Pountney (1937-2016) try to walk in Footfalls in precisely the way that Samuel Beckett had showed her. Though the costume she wore was the original dress and hardly the worse for wear, with time her body had moved on to a different style of movement, with a different level of control, and to take each required step in the way her body once knew, for the full duration of the piece, was no longer within her capacity.

Watching her move, and then watching as the lights moved across the stage where her footfalls would have once been, what I thought about acting and accessibility changed forever. Watching this performing body with the genuine, inimitable traces of age, I felt the ghostly resonances of the text in a completely new way. That day I traded my old answers for new questions: how could anyone say to Rosemary that she should no longer communicate her embodied knowledge, merely because it might have migrated from an earlier authorial ideal? And when was it ever ideal in the first place? What would a “perfect” performance even mean in the context of Beckett, that poet of failure? Instead of demanding sameness in our theatre, what can we learn from difference?

This spring, I sat in the Battersea Arts Centre in London to watch a production of Not I by Jess Thom and Touretteshero (the BBC2 documentary about this production, Me, My Mouth and I, aired on July 21st, and must be highly recommended). The central character of Not I is a mouth floating eight feet above the audience that produces language that it cannot control, and in this case – for the first time in its lengthy and illustrious performance history – the play was performed by someone with Tourettes, a neurological condition that causes the production of uncontrolled language and movements. I was strongly reminded of Rosemary, and not only because the piece was directed by Matthew Pountney (a close relative of Rosemary’s): this piece also found a potent resonance between the artist and the material that was ultimately both disruptive and liberating.

Neurologically, Jess Thom could not promise to perform the precise text as written, but performatively, she was enacting the meaning of the text to its fullest, and even finding new directions to extend it, clarify it, communicate it. Her inclusive spirit was present in every choice, and as a result, this continues to be the most accessible performance I have ever attended. The silent Auditor, written into Beckett’s published text as giving occasional “gestures of helpless compassion,” was interpreting the text in British Sign Language, while the space was set up as a “relaxed” performance in which audience noises, movements, and even the need to depart were all non-judgmentally permitted.

It was experiences like this that motivated the Trinity Centre for Beckett Studies to focus an expert panel and public conversation on Beckett and Disability, which will take place  on Wednesday, August 1st, as part of the public programme of the Beckett Summer School, now in its eighth year at Trinity College Dublin. Chaired by Siobhán Purcell (NUI Galway) and featuring Julie Bates (TCD), Jonathan Heron (University of Warwick), and Declan Reilly (of Trinity’s Disability Service), this panel and “long table” will open a discussion surrounding Beckett and his representations of embodiment.

We are interested in what can be learned from Beckett’s writing across both the novels and the plays, as well as from his manuscripts and his own practice as a director, about the situation of human beings with all types and levels of ability. While much of Beckett’s work is known for representing physical challenge, constraint, chronic pain, codependence, and many forms of inability on the surface of his work, there is also a deep strand of humour, care, persistence and compassion. Perhaps in enumerating so intensely the shared suffering of what it is to have a body, there is an opportunity for common humanity that crosses the boundaries of how we define “ability” at all.

Crossing borders and bringing disparate fields together has been a focus of the summer school since its inception, and the public programme in 2018 reflects this: it will feature a special display of Beckett manuscripts in the Long Room of the Old Library; a concert and conversation in the Boydell Room with Sarah Sew, focused on the music of Morton Feldman; a bus tour of the “Beckett Country” of south Co Dublin guided by Feargal Whelan; and a peek behind the scenes with our 2018 featured artist, Sarah Jane Scaife, about her forthcoming staging of Beckett’s late novel Company in the Dublin Theatre Festival.

This year again, we approach Samuel Beckett with a spirit of curiosity, experimentation, and inclusivity, and we test again the many ways in which great literature changes and contributes new insights over time.