Imagination: the highest kite that can fly 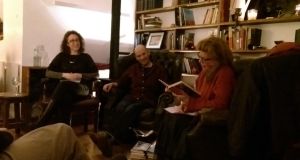 Back in December I was invited to participate at the inaugural edition of Scrutable, an all-things-writing live-chat salon recently begun in Galway. Curated by Aoife Casby and Celeste Augé, the intention is for each instalment to feature two guests who will speak about, reflect on, respond to a pre-arranged theme. The debut topic begged thoughts on the question what is imagination?

At once I felt that familiar strain behind my eyes upon receipt of a question I either do not care to answer or do not know how to answer. And almost as quickly I ransacked my notebook of favourite writerly sayings so as to have some ammo and not be revealed for the fool I deep down know that I am. I alighted on an eclectic set of gems by, among others, Martin Heidegger, John McGahern, Fernando Pessoa, Albert Camus, Alice in Wonderland and Lauren Bacall. Great, I thought. Roll out some of these beauties on the night and they’ll think you’re a genius.

I come with a delay mechanism. And so over the coming days the word started to niggle and then claw at me. Imagination. What about it, then? The first thought I managed to fully form, after my delay mechanism had gotten its kicks, is that for me imagination is something intrinsic. Something that provides a way of dealing with the world, of entering into the world, of receiving the world, of getting through the days of my life. It’s not something neat and tidy, ordered or pre-ordained. It’s more of a river than a canal. It’s something I like to direct me rather than the other way around. It’s angular and twisting and distorted and pretty much impossible to locate. It’s something that can close down if not acknowledged. And, again for me, that has come to mean at very least showing up every day and offering myself to it on a plate. It also means finding a way to regularly empty out my head. It can involve absentmindedness, dithering, reluctance, hesitation, dreaming, walking into walls, leaving doors open, getting into trouble and forgetting. So much forgetting. Forgetting to eat. Forgetting to go to bed. Forgetting to get on the bus when it arrives at my stop. At times forgetting there might be someone depending on me and indeed the other way around. It’s far from easy sailing (some people can only breathe in a storm – Dostoyevsky). And really you wouldn’t want it any other way. It’s a great question, I had by now concluded. It might be the only question.

The initial enquiry prompted others. What stimulates it? Feeds it? Triggers it? Does coffee help? Cake? What is its connection to inspiration? There was fun to be had listing the possibilities. Fast walking. Flannery O’Connor’s sentences. The opening chapter of A Farewell To Arms. That part of the Claddagh where the Corrib meets Galway Bay. Tí Neachtains. Cycling up Taylor’s Hill. Being outside when no one else is. Sissy Spacek’s voiceover to the movie Badlands. The long-ago girl who told me poets belong to no one, not even to themselves. A Streetcar Named Desire. Tom Waits. Edward Hopper. (Albert Camus - I opened myself to the gentle indifference of the world). Baring yourself recklessly and perilously and fearfully. Respecting that though it is not something that can be seen, heard, touched, tasted, it is there, a spirit guide waiting just for you. I suppose it is an extension of inspiration. An idea – sudden, brilliant, timely – arrives, but you still need to do something original with it.

Can the imagination be interrupted? Can it be mislaid? Waylaid? What kinds of things crush the imagination? Deaden it? Everyone will discover their own sets of answers. In my case the clutter and noise of social media is not good. Nor is next door’s collection of electric guitars that sometimes insists on providing the dawn chorus. There are the yappy dogs this sets off, the screaming child who likes to join in.

From an early age the realm of the imagination was a place I came to cherish. (I was more of a genius in dreams than in life – Pessoa). A place where I could interpret the silences around me. I had a blurred awareness that it occupies a very remote space and that if abandoned or ignored it can close down. Nevertheless I did abandon it, and for a long time. Crucially, when I decided to offer myself to its magic as an adult, I realised it had not abandoned me. I was grateful and so relieved, and it is the one thing I guard zealously. I am terrified of its closing down again.

An observation was made about words and their impact on the imagination. My response was to reference the opening page of a novel recently recommended to me, Pedro Páramo, the only novel by the Mexican, Juan Rulfo. I read aloud its famous opening paragraph, not stopping actually until I reached the end of the page and the sentence: It was during the dog days, the season when the August wind blows hot, venomous with the rotten stench of saponaria blossoms. There I paused – as I have done on each of the three occasions I have read this magic-charm of a book. It was that sentence, then that phrase, and ultimately the word saponaria that prompted my reluctance to proceed. I have no idea what a saponaria blossom looks like, smells like. I wouldn’t know where to go to find one. I didn’t Google or wiki or magic up some fast facts courtesy of the Smartphone I do not possess. For now I was content to bask in the mysteries of the word, marvel at its length, it shape, the very look of it on the page. To me it has become a microcosm of the novel and everything its narrative achieves. Part quest, part ghost story, part dream, Pedro Páramo is a mysterious, delicate, fragile tendril of a book. It weaves a spell I dare not try to unravel for fear that something might break or dissolve, and slip away never to return. And this is how I regard imagination. I am in thrall to its there but not there presence.

The venue chairs were so comfortable. Wine arrived. And more questions. Is there a divided self because of imagination? You the person and you the imaginer? Does imagination have a function? What might that be? I have always found difficulty tackling things head on. Whether it be uncapping a pen or setting forth on the big ship of a novel, my approach is never straightforward. My favourite muse tells me there are two ways to do things. There is the right way and there is Alan’s way. It’s rarely meant as one, but I take the comment as a very fine compliment. (Imagination demands that life be told slant – John McGahern).

While working on my first novel a writer I admire said to me you will know your book is done when it is smarter than you are. At least this is one way you will know. I look at stretches of my writing and say to myself, how did I do that? And it hits me: this was not done by Alan the person. It was done by Alan the imaginer. I think imagination serves as a reminder that the possible always outranks the actual.

Can you open the door for imagination when you sit down, or is it something that wanders in when you least expect it? Do you think about imagination? Is it something you worry about? Its being there? Not there? Yes, I bloody do worry about it. And think about it. Am aware of a gaping hole likely to be left in its absence. A void I dare not contemplate. Meantime, this is what I’ve discovered: it is fickle and loyal; willing and reluctant; giving and taking; mysterious and revelatory. Turn up time and time again, and eventually it will meet you halfway. (Imagination is the highest kite that can fly – Lauren Bacall). Presently, I wake and enter every day in a fugue of wonder and dread and finally relief. It’s hardly the ideal arrangement, but for now it’s what sustains me. “I didn’t know unicorns existed,” Alice says to the fabled animal in the Lewis Carroll classic. And the unicorn replies, “I’ll believe in you if you believe in me.” Ultimately, I think imagination is its own reward. And I still have no idea what a saponaria blossom looks like.
Scrutable #2 takes place this evening, Tuesday, March 6th, at 8pm in the Black Gate, Galway with writers Elaine Feeney, Órfhlaith Foyle, and Aoife Casby (chair)

Music Quiz: Which Britpop star appeared in Harry Potter and the Goblet of Fire?
Real news has value SUBSCRIBE