Hear My Song: Irish Theatre and Popular Song in the 1950s and 1960s by Joseph Greenwood review – a useful and attractive addition

Any reservations diminish neither the book’s value as a work of reference, nor its readability 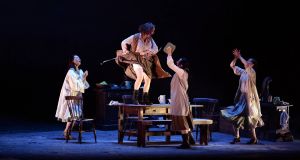 A scene from Brian Friel’s ‘Dancing at Lughnasa’ as part of the Dublin Theatre Festival. Photograph: Cyril Byrne

In Heavenly Bodies, Stewart Parker’s meta-theatrical homage to Dion Boucicault, the ghost of the showman, Johnny Patterson, sings his own composition, The Garden Where The Praties Grow, to Boucicault’s shade. In a spellbinding moment, Patterson recalls performing the song to an audience of Irish “refugees from the Famine”, in Liverpool, in the late 1860s, and he says “I sang on to the end, and I heard neither laughter nor jeers, but a long low moan – the keen of grief for the phantom generations with us there in the tent.”

In Hear My Song: Irish Theatre and Popular Song in the 1950s and 1960s – an ambitious and wide-ranging book – Joseph Greenwood’s analytical project explores experiences of the kind which haunted Johnny Patterson. His critical wager is that staged songs “can provide a window into the past”, and so he draws on scholarship by Pierre Nora, Joseph Roache, and Marvin Carlson in making a case, both for the enduring significance of songs in Irish culture, and for their radical malleability over time.

Greenwood’s approach to the archive is meticulous: he gives welcome attention to works by Louis D’Alton, Donagh McDonagh, and Bryan MacMahon, for example, and explores the fine detail of a popular culture responding to “returning emigrants, the phonograph, cinema, television, radio, printed media, and most importantly, songs and music – carriers and transmitters of ‘alien’ forms of cultural memory”.

Hear My Song is structured in three sections, concentrating, in turn, on how staged song reveals and inflects core concerns around emigration, independence, and Irish Travellers. There is, also, a schematic commitment to the authority of an asserted trajectory, from tradition (personified in Eamon de Valera) to modernity (personified in Seán Lemass). Section one, for example, analyses staged song in order to argue that popular attitudes to emigration developed from acquiescence (John Murphy, The Country Boy; 1959) through contestation of received national pieties (John B Keane, Many Young Men of Twenty; 1961) to their rejection (Brian Friel, Philadelphia, Here I Come! 1964). Section three traces a perceived trajectory of cultural representation and social reality in relation to Irish Travellers, in Donagh McDonagh’s God’s Gentry (1951), John B Keane’s Sive (1959), and Bryan MacMahon’s The Honey Spike (1961). Along the way, the reader is treated to attractive vignettes on Bridie Gallagher, Count John McCormack, The Clancy Brothers and Tommy Makem, Dickie Rock, and Radio Éireann’s The Walton’s Programme.

One of the book’s more striking features is a commitment to bringing featured playwrights vividly to life, as artists responding viscerally to stasis and change in social conditions, using the “mnemonic and performative” capacities of popular song. In addition to functioning as aesthetic device for contesting received ideas, song could underpin dramaturgical structure, as in the use of The Last Rose of Summer, by Murphy; California, Here I Come, by Friel, and The Valley of Knockanure, by MacMahon.

While, from the outset, Greenwood acknowledges the power and ephemerality of acts of performance, his reverence for writerly intention – which rarely survives production – diverts attention from what audiences actually saw and heard in moments of performance. All too often, the narrative presumes to speak for audiences, privileging textual analysis over the live dynamics of the interplay between the fictional world of the stage, and the actual worlds of spectators. Where Greenwood engages with those dynamics, as in his analysis of the singing of The Valley of Knockanure, in the Puck Fair episode of The Honey Spike, the quality of his criticism – and our understanding – is enriched.

The more obvious shortcomings of Hear My Song lie in its scope: the work is overlong – almost three books in one – and neither introduction nor conclusion are particularly well focused. Enabling information might usefully have been integrated in the body of the text, rather than set apart in unusually copious footnotes. These reservations diminish neither the book’s value as a work of reference, nor its readability, and Greenwood’s main achievement resides in diligently opening up a critical perspective on song as dramaturgy. In so doing, he opens up lines of scholarly enquiry, into, for instance, the dramaturgical power of music and song in plays such as Billy Roche’s Amphibians (1992), and Jim Nolan’s The Salvage Shop (1998). As Alan Gilsenan’s documentary, Sing On Forever (2003) revealed, there is very considerable potential in developing Greenwood’s methodology toward a full-length study of Tom Murphy’s plays. Most importantly, Greenwood invites readers, and theatre-makers, to return to original creative works – many of which have been neglected – with a renewed critical appetite. For these reasons, Hear My Song is a useful and attractive addition to Peter Lang’s Re-Imagining Ireland Series; the 85th title published since its launch in 2008.