Lincoln on the Verge: timely reminder of a previous threat to US democracy 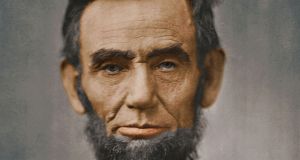 Abraham Lincoln was hailed by huge crowds in the towns and cities he visited, and he made over 100 speeches. This had the effect, as intended, of galvanising public opinion in support of the war with the South. Photograph: Getty Images

Whoever succeeds Donald Trump as president of the United States, whether in January 2021 or later, will be faced with the gargantuan task of restoring the prestige of the presidency.

There have been at least three previous occasions in American history when an incoming president faced a similar task due to the dysfunction or malfeasance of his predecessor: Ford after Nixon in 1974; Franklin Roosevelt after Hoover in 1933; and Lincoln after Buchanan in 1861. The last of these transitions, from Buchanan to Lincoln, is the subject of this very fine book by the American historian Ted Widmer – who, incidentally, served as a speechwriter in the Clinton White House.

Widmer focuses on the interval between Lincoln’s election in early November 1860 and his inauguration on March 4th, 1861. It was only in 1937 that inauguration day was moved back from March to January 20th in recognition of the fact that a four-month period with an outgoing president whose mandate has been superseded was too long. During the interval between Lincoln’s election and inauguration, the Buchanan administration simply ceased to function. It had never been very effective, and had failed utterly to respond to the crisis that was gradually building over slavery. Its priority had been to appease the slave states of the South.

Lincoln’s election signalled the end of the benign policy towards slavery that had characterised the Buchanan and earlier administrations. Lincoln, though he personally abhorred slavery, took the pragmatic view that he would not seek to abolish slavery in the states where it was already entrenched – but he was not prepared to countenance its expansion into the West as new territories opened up. That was not good enough for the leaders of the South, who were in any event suspicious of Lincoln’s hostility to slavery and fearful that total abolition would eventually follow his election.

Accordingly, 13 southern states seceded from the union – the first seven in the interval between Lincoln’s election and inauguration. They formed the Confederate States of America, with Jefferson Davis as president (inaugurated on February 18th, 1861, two weeks before Lincoln became president). Many senior officials in the Buchanan administration and members of Congress from the South abandoned their posts to join the Confederacy.

Davis himself had been a senator from Mississippi since 1857, and was previously secretary of war in the cabinet of Buchanan’s predecessor as president, Franklin Pierce. It was even rumoured that Buchanan in his final days as president might officially receive an envoy from the government of the Confederacy, thereby giving it de facto recognition; he didn’t.

Lincoln’s response to these events was predicated on the proposition that what was at stake was the future of democracy in the United States – and, by extension, in the rest of the world where it still had a very uncertain foothold. The issue was, to quote from his Gettysburg address, whether the United States or any other nation “conceived in liberty and dedicated to the proposition that all men are created equal” could endure. As Widmer writes, “every democracy ever known had failed, beginning with the Greeks twenty-four centuries earlier”. Would the United States fail too because it could not resolve the problem of slavery? That is what the American Civil War was about.

Before he could assume the office to which he had been elected, Lincoln had to make his way by train to Washington DC from his home town of Springfield, Illinois – not quite the Wild West, but closer to what was then the western frontier of the United States than to its Atlantic coast. That journey is traced in meticulous detail in this book, and there is much extraneous – though fascinating – information about the development of railroads in America at this time.

Given the tensions over slavery, Lincoln’s safety while in transit was always in doubt – there were many assassination threats – but he had the benefit of the intrepid Allan Pinkerton and his detective agency in ensuring his safety.

He followed a circuitous route to Washington, partly out of necessity. He could not risk, for example, entering Virginia which was on the point of seceding and would do so on April 17th. Departing from Springfield on February 11th, he travelled east through Illinois and Indiana, then north through Ohio to the Great Lakes and thence south through New York, New Jersey, Pennsylvania, Delaware and Maryland – the last two being slave states, though neither joined the Confederacy. His passage through Maryland was particularly perilous, and was done in secrecy during the night. He covered a total of 1,900 miles over the 13 days that it took him to reach Washington.

Along the route, he was hailed by huge crowds in the towns and cities he visited, and he made over 100 speeches. This had the effect, as Lincoln intended, of galvanising public opinion in support of the war with the South that seemed increasingly likely as he made his slow progress to Washington.

Two stops on his journey were of particular importance. The first was at New York city – then, as now, the centre of commerce in the United States. The business elites of New York were sympathetic to the Confederate cause. Widmer notes that New York vessels had been carrying Southern cotton around the world since before the American revolution, and New York bankers were always happy to offer loans to Southern plantation owners who needed credit. “These were,” he writes, “old, comfortable relationships.” Lincoln’s enthusiastic reception by the general public in New York counterbalanced any incipient pro-Confederacy sentiment based on economic considerations.

The other important stop was at Philadelphia, the original capital of the United States – where, at Independence Hall, both the Declaration of Independence and the Constitution has been debated and adopted. Lincoln visited Independence Hall on Washington’s birthday, a conjunction of place and time that was highly symbolic. Widmer notes that Lincoln came to Independence Hall to reaffirm his commitment to the values enshrined in the Declaration of Independence, and he adds: “By arguing simply that Americans needed to live up to their founding ideals, Lincoln conveyed an urgent message to a people desperate to remember a less corrupt time, when America spoke to the world”.

The people of the United States once again need to be reminded of their founding ideals as they prepare for another presidential election. The present times are no less fraught with danger for democracy in America – and elsewhere – than they were in 1861 when Lincoln made his fateful journey to Washington. That makes the publication of this book most timely.