How Salvador Dalí, travel and environment are intertwined

Jackie de Burca on her love for Catalonia, her book on Dalí and travel guide to Tarragona 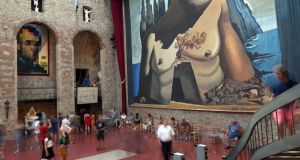 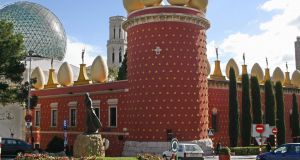 The “Eggs Tower” of the Salvador Dali Museum in Figueras, birthplace of the painter in Catalonia. Photograph: Raymond Roig /AFP/Getty Images

Salvador Dalí returned into my life on May 25th, 2017. Do I hear you say, “But Salvador Dalí is long dead, although his moustache is still intact?” From that day on, Dalí became my muse and teacher. A spirited personality, even in death, that I have had the dubious pleasure of delving into. As I did, I discovered how the great Dalí’s creative output was inextricably linked to travel and environment.

I grew up with Dalí in my house. Not physically, in terms of the man himself, but as one of a selection of artists that my creative mother admired. So when I say he returned into my life that is what I mean. His second coming was in the form of an email from a London publishing company, that I almost deleted before reading. Luckily I didn’t, as this was the first contact about the possibility of me writing the book, Salvador Dalí at Home. The publishing contract wouldn’t have come to pass without the influence of travel and environment on my life.

In January 2003, I accidentally moved to Catalonia. One month of house-sitting and I still live in Spain 15 years later. Those first few months of 2003 are firmly etched in my memory and heart. I felt childlike, joyful and privileged as I cycled around the Catalan countryside embraced by almond, olive and orange trees. Eagles soared overhead and from time to time a cute bunny rabbit crossed my path.

Although I wasn’t in the same part of Catalonia that had inspired Dalí, the environment enraptured me in a similar manner. Regardless of his innate talent that he honed obsessively, both travel and environment played immensely important roles in Dalí’s creative output. In fact, in 2017, the director of the Gala-Salvador Dalí Foundation, Montse Aguer Teixidor, said, “This housecum-studio was the refuge of the artist and Gala, at the very heart of the only landscape in which it truly belonged: that of Port Lligat, Cadaqués and Cap de Creus. A landscape that conditioned and stimulated the painter. I would even dare to say it gave him his identity. Dalí identified with it completely.” Trips to and life in places such as Paris and America played highly important roles in moulding aspects of the artist as he grew older.

In my case, although I lived in other parts of Spain over the years, I was drawn back close by to where I house-sat originally, in 2013. The incredibly beautiful, diverse landscapes that unfold around me within short journeys, going in any direction, inspired me to start my first travel blog.

Without understanding the scientific facts behind it, until years later, my deep immersion in the Spanish culture and environment had triggered a type of creative metamophosis. As Picasso said, “Every child is an artist. The problem is how to remain an artist once we grow up.” Living in Catalonia and parts of Spain had re-awakened talents that had been an integral part of my childhood. I had started to write and paint again.

Adam Galinsky, an author, social psychologist and professor at Columbia Business School, carried out a study that correlated heightened creative outputs in fashion executives linked to frequent travel. However, his study showed that the highest level of creativity was achieved by those who spent time interacting for longer periods in other cultures. In other words, it is deeper immersion in different environments that gives us the potential to stimulate higher levels of creativity.

It was because of my first travel blog that the London publishing house discovered me and asked if I wanted to write the book which became Salvador Dalí at Home. During my work on the book, I identified strongly with Dalí’s reactions to his various environments, that he experienced either locally or through travel and living abroad. Observing how each place affected him, I became fascinated with the potential that travel and other environments can hold for any of us.

As I delved into Dalí, I also came to realise how important his childhood had been in shaping his immense talent and creativity. He immersed himself so deeply into his environments that he merged with them, observing their finest details, which he absorbed into the depths of his subconscious.

In an age when parents struggle to detach their children from their tech gadgets, it occured to me that travel and appreciation of different environments have such huge potential to enrich and trigger creativity, not only in children, but in entire families.

I remembered the wonderful Irish phrase, “An bhfuil aon scéal agat?” Do you have any story? Having been born into the nation of storytellers, I thought what better way to inspire younger generations to connect with and respect other environments, than through the art of storytelling. In that moment Travel Inspires was born.

Travel Inspires features destinations for all the family, involving the children in the research and decision-making phase, while triggering their curiosity and educating them about the destination.

The blog is in its embrionic stage. However, you can see the Tarragona example; a wonderful city located one hour south of Barcelona. I’ve adapted a local legend for 21st-century children. The legend is about a bridge, known locally as the Devil’s Bridge, which makes up part of the Unesco ensemble of Tarragona. According to the legend, the bridge was built by the devil himself. The story is called Daniel the donkey and the devil’s deal and it has a happier ending than the original version, which was very tragic for the donkey! Cartoons are currently being drawn by the very talented cartoonist, Tim Leatherbarrow.

Your children can learn fun facts in the Colour & Learn free colouring pages, which include Human Castles, Unesco Heritage and Gladiators. Additionally, the travel guide includes other sections aimed at younger family members such as 14 facts about the Roman lifestyle, as Tarragona, then called Tarraco, was the capital of Hispania Citeriorwas, a Roman province, and Tarragona: 9 cool places to take your parents. A local recipe is also included so that families can make it before and after their holiday in Tarragona. The main travel guide includes tips from locals and travel bloggers, and will be continuously updated to make it the most informative, authentic resource over time.

Inspired by my discovery of how Dalí, travel and environment are intertwined, I’m currently working on other ways to inspire creativity and appreciation of different environments, especially in children. We created the Tarragona guide as an example to show to other destinations and I am delighted to announce that the first forward-looking destination to partner with us is beautiful Peniche, in Portugal. Portugal is very close to my heart, as my partner is Portuguese so I have been there many times. Much like the Irish, the Portuguese are very hospitable and extremely family orientated.

Additionally, I am developing a children’s travel writing competition and all entries will be published on Travel Inspires. This means that other children can be inspired by these articles written by their peers.

Travel Inspires is now open for membership. To receive these new family-focused travel guides when they are first published, head over to the blog to become a Travel Inspires Member for free.
Jackie De Burca is author of Salvador Dalí at Home, and creator of Travel Inspires