At Dusk by Hwang Sok-yong review: A life subtly corrupted 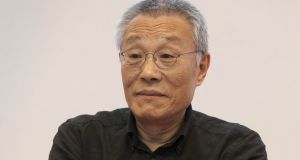 How, or when, does a life begin to falter? Perhaps the mistakes of youth can be forgiven and only the later compromises, dishonesty and betrayals count against a person? How might we decide? For Park Minwoo, one of two narrators in Hwang Sok-yong’s quietly probing novel At Dusk, there is no great moment of self-confrontation or realisation, rather there are subtle pointers to flaws and failings. Park is not a terrible person. His faults arise more from his hesitations than from his actions. More, perhaps, from the society of which he is a part than from any resolute choices of his own.

The disappointed, lonely, middle-aged, middle-class man is hardly rare in fiction, but the manner in which Hwang Sok-yong allows us to grow our understanding of his main character gives the novel much of its appeal. Park Minwoo, a very successful architect, has just given a lecture when we first meet him. The details of the talk and all subsequent details come directly from him, so we must judge for ourselves the truth and honesty of everything he says as well as be alert to the moments when he reveals himself in unintended ways.

We soon know that he has a wife and daughter, but that both live in the US and that neither of them intends coming back to live in Korea. We see him walk around the area in which he grew up – a town he hasn’t visited in some time – and notice how quickly he is disoriented. So much has changed, but he is part of the reason such change has occurred. He is part of a company, and a corrupt system of politics and planning, that has forced the poor out of their homes – using violence if necessary – to build high-rise apartments on the newly vacated land.

Alternating with the chapters narrated by Park Minwoo are chapters in which a young woman, with aspirations to be a playwright and actor, gives another first-person account of a life, one that is also burdened with doubts and remorse; the inevitable consequence of existence. But she is a kind and thoughtful person and it is often the most ordinary details of her life that engage the most. Her part-time job, working the night shift in an all-hours shop, provides simple, oddly interesting details from behind the counter.

Park Minwoo grows up in a slum where education beyond a certain level is unusual and only one other person, a girl called Cha Soona, goes to school at an advanced level. This allows them to interact and to share an interest in serious literature (Hesse and Dostoevsky are mentioned) while around them a very violent street life plays out. It’s a violence that is present to a far greater extent at the government level, especially during the time of military dictatorship under Park Chung-hee and later at the time of the Gwangju uprising, about which Han Kang has written in her novel Human Acts. It is at such times that Park Minwoo shows a marked weakness: “I sympathised with those who were fighting social injustices, but at the same time ... I was able to forgive myself for not getting involved. Over time this turned into a kind of habitual resignation, and it became second nature for me to regard everything around me with an air of cool indifference.”

A similar ability to remain detached persists when he is aware of the extent of the corruption involved in gaining contracts to build houses. “We took the crumbs that those in power tossed our way and used them to grow our own wealth. And even if we did privately feel some guilt about it, we all knew the feeling wouldn’t last. In fact, we still know it.”

At first the two narrative threads seem unrelated but, of course, they tighten around each other to become like a single strand, seen from very different perspectives. Cha Soona has, it seems, attempted to reconnect with Park to let him know some details of the difficult life she has led since they were close friends. Can events in the past be altered in the present? In a video of an interview with another architect, at a retrospective of his work, he says: “Architecture is not the destruction of memory, it is the delicate restructuring of people’s lives on top of a sketch of those memories.” So it is with this intriguing novel.