A Christmas short story from author of The Good Son 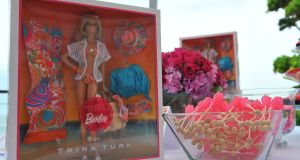 Fintain and Síofra are awake in Ma’s bed. Ma went downstairs about half an hour ago. Getting things ready. Not that there’ll be much this year.

“Can we go down now?” asks Baby Síofra. She made them start calling her that again the other day though she’s not even anymore.

“No, we can’t go down yet,” says Fintain. “Sure, Mammy’ll be talking to Santa. And he’s got to drink his whiskey and feed Rudolf some mashed potatoes.”

“I read in a book you’re supposed to leave him carrots,” says she.

“Was it one of those English books?” says Fintain. He tuts and shakes his head. “What have I told you before about the English?”

“Cor-rect,” says he. “Now, those in the know, know, Rudolph always eats the local food. He’s like one of them travelling food critics from the TV. Sure, doesn’t he love going to India and all? Friggin’ adores crunching them poppadums. But he’s always geed up about coming to Ireland ’cause, he says, he loves Mammy’s mash the most in all the world.”

“Does he Fintain?” says she.

She doesn’t answer. She doesn’t believe a word that comes out of anyone’s mouth since Da left. Except Fintain’s and only sometimes.

Fintain, on the other hand, has been in his element since Da cleared off. Now Baby Síofra and he get to sleep with Ma in the double bed. Ma says it’s because it lets Big John have a room to himself without them two – especially after the night he got so drunk he pissed in the wardrobe thinking it was the toilet. Ma was dead annoyed, ’cause that meant he had his willy out in front of Baby Síofra, and Fintain said, sure she was asleep, and Ma said, that was just as bad as it could have appeared in her dreams, which isn’t even a thing, is it? And, anyway, Ma said, you’d think at 16 he’d have learned to handle his drink!

Ma only lets on that Big John is why she has them share her bed – like Fintain lets on to Baby Síofra that Santa’s real. He knows he’s not ’cause Da told him when he helped carry the drunk up to bed last Christmas Eve. There is no magic man who gives you presents. Only Das and their wages. He killed the pretend Christmas and now he’s killed the real one ’cause he and his wages are gone. And Ma’s distracted.

Really Ma wants the kids in bed with her because she can’t sleep now she’s on her own. She told Jinny the tick woman when she called with her book to collect the money Ma owes. Jinny told Ma she’s still holding on, otherwise, why’s she still wearing that ring? That’s when Ma started twisting it on her finger. She hasn’t stopped since. She does it when she’s watching TV. She does it lying in bed at night when she thinks Fintain’s asleep but he’s really watching her with his eyes almost closed. She even does it in the bath ’cause Fintain saw her when he came in and sat on the toilet doing his spellings the other day. He doesn’t like leaving Ma alone for one minute after he found her that time.

“Can we go down now, Fintain?” says Baby Síofra.

“Do you want Santa to get drunk by belting that whiskey into him? Sure he’ll be knocking down chimneys from here to Cullybackey,” says Fintain.

Wee Síofra sucks on the corner of a dirty old baby bib from years ago she found in a suitcase underneath the bed. It’s an absolutely disgusting habit that turns Fintain’s stomach and he’s been trying to get her to stop but she squeals the place down if his hand as much as invades the same airspace as that bib. She’s promised to throw it in the fire today if she gets a Malibu Barbie with a swimming pool, a diving board and a changing room. You’re more likely to see St Patrick flyin’ by on a motorbike as Ma hasn’t two pennies to rub together. And it’s not like Big John’s gonna give her any money, he can’t even get the dole cuz he’s supposed to be at school. He’s a waster like Da.

Síofra wiggles, which is not a good sign as she’s started to wet the bed since the night she told them all to call her Baby Síofra again. Fintain sticks his hand under her bum. Dry as a bone.

“I’m holding it in for Santa,” says she.

“Santa’s been!” shouts Ma from downstairs.

And even though he knows there’ll be frig-all for him down there, Fintain’s heart thumpers anyway. And the look on wee Síofra’s face is like 56 Christmases and a Hallowe’en rolled into one.

The two leap through the open door and down the stairs.

Going into the living room Fintain and Baby Síofra stop dead. If synchronised jaw-dropping was an Olympic sport they’d be gold medallists. Three mountains of presents flagged with three kids’ names at the summit. There’s a moment’s pause as Fintain squeezes wee Síofra’s hand then they both bomb into them like they were diving into Barbie’s Malibu pool.

Fintain couldn’t even enjoy Baby Síofra’s happiness because there was just no more happiness left in the world for him to feel.

Kill me now, God, thought Fintain, it’s all down hill from here.

“Jesus, the screams of ye’s. Who’s dead?” says he, then sees his mountain and his eyes pop out like a cartoon coyote’s. “Sweet Mother of Jesus. Did you win the lotto?” he says, picking up his new tech and getting lost in plugging and tapping.

The Four Beamers, that’s the McGuinness family right now. At that moment something occurred in Fintain. He looked at his Ma in figuring-it-out-fulness. He knew Santa wasn’t real. He knew believing was a baby thing. But sure, couldn’t he see it with his own eyes?

He almost closed his eyes, looked at Ma, in secret, like he does at night. Watches Ma twist that bloody ring, like he does every day. Then sees. There is no ring. Ma’s twisting skin where a ring used to be.

Paul McVeigh is the author of The Good Son, winner of the Polari Prize

Finding the Way Back: A career-best performance from Ben Affleck
Real news has value SUBSCRIBE