Ireland’s blasphemy law has had a long, ineffective and undistinguished tradition 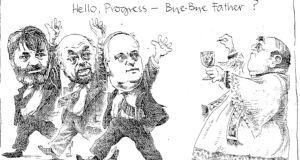 Between questions of campaign financing, the cost of the presidency and endless eyebrow-raising caused by what candidates think they can do with the position, the referendum on blasphemy is at risk of causing many voters surprise when they receive two ballot papers on October 26th. While the Constitution requires that the State define blasphemy as a criminal offence the law, as it currently stands, is pretty much unenforceable.

After independence the State relied on inherited British common law custom and practice in relation to the law on blasphemy. This continued even after the introduction of the Defamation Act 1961 which provided for updated penalties but did not provide a written definition of blasphemy. This common law tradition finally came a cropper in 1996 when one concerned citizen sought to bring private prosecutions against Hot Press, The Irish Times, and The Sunday Independent over their coverage of the previous year’s divorce referendum.

For the two newspapers, cartoons by Wendy Shea and Martyn Turner were at issue: Shea’s cartoon depicted politicians John Bruton, Proinsias de Rossa and Ruairi Quinn walking past a priest distributing communion: the tagline was “Hello Progress – Bye Bye Father” – a play on the anti-divorce campaign slogan “Hello Divorce – Bye Bye Daddy”. Turner’s cartoon depicted Jesus on the cross telling anti-divorce campaigners “Don’t quote me on Christian marriage – I was Jewish” – a sharp retort to those on the anti-divorce side who sought to make an issue out of a Jewish Minister for Equality and Law Reform, Mervyn Taylor, bringing forward the proposal to abolish the constitutional ban on divorce.

For its part, the Christmas edition of Hot Press contained an article headed The Birthday Boy with a caricature of Jesus Christ that was described by one conservative figurehead as “the ugliest blasphemy ever seen in print”. All three cases were taken separately with the test case centred on the Sunday Independent. Justice Hugh Geoghegan declared no public interest would be served by allowing the private prosecution to proceed as the cartoon needed to be viewed in the context of the articles around it – particularly an article by Conor Cruise O’Brien that starkly analysed the diminished influence of the Catholic Church in Ireland. Geoghegan concluded that while the cartoon might be perceived by some to be in bad taste, it did not constitute an attack on any doctrine of the Catholic Church.

An appeal to the Supreme Court resulted in a declaration that by granting free profession and practice of religion the 1937 Constitution had abolished the common law offence of blasphemy. Without a written definition of blasphemy no prosecution could proceed: a decision that most likely spared the makers of Father Ted, first aired on RTÉ between 1996 and 1998, numerous court appearances! There ended also the cases against the Irish Times and Hot Press.

But since the Constitution currently requires the existence of an offence of blasphemy there followed the insertion of such a definition into the Defamation Act 2009. Then minister for justice Dermot Ahern declared that the new law was written in such a way that no one would ever be prosecuted under it. The law requires the State to prove that a person published or said something grossly abusive or insulting in relation to matters held sacred by any religion “thereby causing outrage among a substantial number of the adherents of that religion”. The State must also prove that the person deliberately intended to cause such outrage.

The most recent blasphemy investigation by Garda into Stephen Fry’s opinion of God on RTÉ’s The Meaning of Life stalled last year when a large enough number of people could not be located to testify that Fry’s comments had offended them. Even if such individuals could be located the State would need to establish that Fry deliberately intended to offend these people.

If all this were not enough of a disincentive, the law also provides those accused of blasphemy with a near cast-iron defence. No offence can be judged to have occurred if the accused can prove that “a reasonable person would find genuine literary, artistic, political, scientific, or academic value in the matter to which the offence relates”. If the Fry case had proceeded there would have been an endless procession of experts from disciplines too varied and too many to mention arguing whether his personal opinion on God – which was canvassed during a programme centred on questioning people’s religious beliefs – constituted blasphemy. Cue international media coverage that no marketing budget could ever achieve!

All this is a far cry from 1956 when blasphemy was used as a defence for an attack – by religious and State officials – on members of a minority religion. In May of that year two Jehovah’s Witnesses who had been calling from house to house were set upon by a mob in the village of Clonlara, Co Clare. Led by the local parish priest, the mob ran the two men out of town after assaulting them and burning their pamphlets. The subsequent court case saw one Fr Patrick Ryan and 10 locals charged with assault and malicious damage. The charges were not denied and during the case the Bishop of Killaloe made a submission to the court declaring his support for the mob’s actions.

Counsel for the defence claimed the two men had committed blasphemy by propagating the belief that the concept of the holy trinity was a pagan belief. In his judgment, Justice Gordon Hurley found the charges against the mob had been proven but he dismissed the charges under the Probation of Offenders Act. Turning his attention to the two victims (who were not on trial) he declared that they “were guilty of blasphemy in the Catholic understanding of the word”. He then bound the victims to the peace on sureties of £300 each which, if they defaulted on, would result in three months’ imprisonment. This must be one of the few cases in Irish legal history where the victims received a stiffer judicial sentence than the offenders. It could also be argued that the last sentence for blasphemy in Ireland was handed down, not in 1703 as often stated, but in 1956!

Ultimately, blasphemy, like beauty, is in the eye of the beholder. While in the past the blasphemy law was used to suppress supposedly heretical religious beliefs, in modern Ireland it could, as in the cases above, be viewed as inhibiting free speech. That any religion feels the need for the State to police debate on that religion’s beliefs is a poor reflection on that religion. The State already prohibits incitement to hatred on the basis of religion – a provision that will remain unchanged regardless of the referendum result.

But while the offence of blasphemy seeks to put religious ideologies above public debate, in reality it offers nothing other than a veneer of protection to ideas – of whichever religion – that many in modern Ireland no longer subscribe to. As an effectual crank’s charter the blasphemy law has much to recommend itself: in a modern, increasingly secular state it is a symbol of a past from which a lot of citizens wish to move on.
Mark O’Brien is the author of The Fourth Estate: Journalism in Twentieth-Century Ireland (2017)

Charlie Daniels, country star who sang The Devil Went Down to Georgia, dies at 83
3

Pachinko review: a masterpiece of empathy, integrity and family loyalty
5