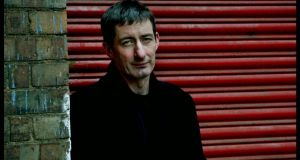 “The sandpit had been opened.”

In the novels of Eoin McNamee, nothing stays buried forever. This one begins with digging, and with the hauling up of old bones. The body that has been discovered is “clad in vile rags . . . halfway up the pit wall as though she had crawled from it”. As the digger’s bucket is raised, what hangs from its teeth is “filthy and dripping”. From the first page, as ever, there is the promise of dark deeds to be uncovered, of secrets to be unearthed. From the start, too, we are warned that this will be hard and dirty work.

For McNamee, best known for Resurrection Man and his Blue trilogy, this is familiar ground to break. Those novels, while not quite “true crime”, traced the repercussions of real acts of historical violence, while their settings amid the squalor of Northern Ireland’s Troubles were likewise drawn from life. In The Vogue, the past remains a brooding and inescapable presence, but while McNamee retains his grittily forensic style, his narrative this time is provoked not by real atrocities but by crimes of his own invention.

He has strayed further afield for his setting too. Once home to a wartime airbase, by the year 2000 the wind-scoured coastal town of Morne is a place of forlorn coffee shops and decrepit chalets. The remains disinterred at the outset are those of a young girl, and are found at a caravan park near the crumbling runway. When a solicitor named John Cole arrives and starts asking questions, the locals – led by the Rev Wesley Upritchard – are less than accommodating. Upritchard is the self-styled minister of the Elected Brethren, an insular sect that has dominated the town since the war. The local sergeant is under its sway, and the coroner is in no hurry to hold the inquest. These are familiar elements, perhaps, but McNamee sets the scene with dark panache, and not a little grim humour.

Inquiring after the girl’s remains, Cole asks Lynch if the morgue is open. “Only if you’re dead,” Lynch replies.

The recent past is unsettled like stirred-up sediment, but there are deeper layers too. In a parallel strand, we learn that a black American serviceman named Gabriel Hooper was stationed at the airbase, and was court-martialled following the rape of a local girl in 1945. Although Hooper’s fate is sealed from the start, these flashbacks yield moments of transcendence. Especially moving is Hooper’s obsession with the trappings of aviation, and his peculiar infatuation with Charles Lindbergh. As a boy, he steals into an airbase and climbs into the cockpit of a spy plane. When he is discovered, he imagines Lindbergh entering and taking possession of the scene. “He would take Hooper around the plane, hand placed around his shoulders . . . and together they would catch the sweet winds.”

The contemporary narrative has much less to offer in the way of sweetness, but then sweetness isn’t exactly McNamee’s brand. Everyone is keeping secrets, often about themselves, and Cole’s dogged quest for the truth is compelling enough in its procedural way. But the real pleasure of this novel is in its noirish exposition of bleak townscapes and blighted lives. These are often evoked in explicitly cinematic terms (as when we observe Cole’s comings and goings through Upritchard’s surveillance cameras), but McNamee’s compositions are much more Lars Von Trier than Ridley Scott, the frame filled with off-season melancholy and flickering marram grass.

The interiors are no less dismal, but just as rich in well-observed detail. McNamee’s prose, too, is at its most satisfyingly flinty when he is setting out these sombre tableaux. Cole visits the grim local bar, where naturally the television is on with the sound down. The regulars watch “jockeys in muted silks . . . in rain-blown provincial racetracks”. In the caravan of the librarian who becomes the nearest thing he has to an ally, he observes “pieces of driftwood gone white as bone, stones picked from the shingle. A jar of dried sea pinks. A sea urchin casing. The winter sheddings of the ocean.”

McNamee is given to moments of portentousness, and to sounding not just a note of foreboding, but two or three in succession. He describes the women who run the charity shop not just as “sisters to the gloom”, but also “sisters of last charity . . . [holding] office among the lost things of the world”. But these are forgivable excesses, and arise from McNamee’s commitment to his vision. It is a vision, increasingly, whose shadowy grandeur invites comparison with such giants of the genre as James Ellroy.

Like Ellroy, McNamee conjures dark delights from dark places, places where there is “no prospect of anything other than more rain, more night”.

Paraic O’Donnell is a novelist and critic. His most recent novel, The House on Vesper Sands, is published by Weidenfeld & Nicolson