Grandpa taught me the deep impression a grandparent can have

Ally Bunbury remembers her grandfather’s role in an adventurous childhood 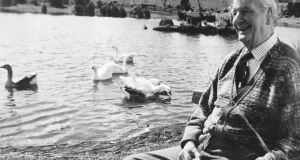 Ally Bunbury’s grandfather Eric Craigie by the lake he created

One of my earliest memories is driving a car around a field of lush grass. I was seven years old, my feet barely reaching the pedals, as Grandpa sat in the passenger seat, casually instructing me about changing gears and keeping tight control of the wheel. That was the tip of the iceberg in terms of the life skills my cousins, siblings and I learned from our grandfather, Eric Craigie, a man who lived and breathed adventure.

On his manmade lake, shaped like the map of Ireland, Grandpa held a raft-building tournament. Split into three teams, we were supplied with barrels, rope and various pieces of wood. To win the prize, we had to create something that could float, upon which we would then punt our way to the lake’s island where several geese lazed in the sun. That same summer, when a fox was spotted lurking, several grandchildren trundled off to Dublin Zoo with Grandpa to collect a trailer load of lion dung (yes, from an actual lion), which was then dispersed around the edge of the lake to deter the fox from any goose-gobbling ideas.

The lake was key to Grandpa’s happiness, I think. These days we call it mindfulness but in the 1980s he found peace by strolling at sunrise or counting his small herd of cattle, while playing golf as he made his way through the field towards the lake. Then he’d boil up the Volcano Kettle, by lighting twigs at its base, drink a mug of instant coffee and smoke a morning cigarette as early rising cousins paddled in the lake, lifting up stones to check on the cray fish.

Grandpa had always been a man ahead of his time. On holiday at the family fishing lodge in Mayo, we were sent to the beach to gather seaweed so that he could soak for hours in the bath. Naturally the bath enamel turned into a colour similar to tea over time. He believed his smooth, relatively wrinkle-free skin was due to the nutritious power of seaweed. Perhaps it was while he lay in the bath (the same tub Count John McCormack had on occasion bathed in) that Grandpa decided to purchase an Aquacat, an amphibious land craft, which could travel on land as well as water and looked like a mini convertible army tank. The farmers in that remote part of Co Mayo had never seen anything like it and were intrigued when Grandpa called a meeting in the local community hall to discuss its benefits. At the age of 11, I was appointed PR guru ahead of the event. I designed a promotional poster, with the headline “The Aquacat is like Jesus … it can travel on land as well as water,” though I think my mother hastily removed the Blutacked poster from the hallway before the people of this old-fashioned and religious community began flocking in to hear what Grandpa had to say. His idea was for the Aquacat to be used by farmers to rescue sheep stranded on the bog or high up on a mountain. He was always trying to think of modern ways to ease the hardship, and though not everyone believed in his ideas, we the grandchildren always did.

Grandpa also drove a three-wheeler Honda motorbike around his farm, building bridges across the ditches so that time wasn’t wasted opening gates. I remember so vividly clutching onto his back as we tore around corners, high grass rubbing against my ankles, the engine jolting at every gear change.

Grandpa also wrote a couple of memoirs including An Irish Sporting Life. When we went on road trips with Grandpa, a nature quiz on the hedgerows was the main source of entertainment. Sometimes, claiming to be lost, Grandpa would pull up outside a random house and ask us to “run to the door for directions”. It was terrifying, having to approach a door, awaiting a complete stranger. The moment the door opened and the person spotted Grandpa, their eyes would light up; he was of course, an old friend, all along. And so we’d all pile in and have tea – or, in those days, certainly something stronger for the driver.

Some of my memories are so absurd I almost can’t believe they are real. And yet these were my formative years and to this day, I think of Grandpa and his extraordinary approach to life. He made me understand the deep impression a grandparent can have upon their grandchildren – how we can learn from the past and how, as we find out what happened to the older generations, that can help to explain relationships, tensions, complications.

In my new book Infidelity, the heroine Elodie Gold finds herself in such a pickle that she seeks refuge at her grandfather’s country house in Ireland. Slowly and discreetly, her grandfather helps her to understand her background and it is because of this that healing becomes possible for her. Infidelity is a story of love, and also of forgiveness. Characters find peace by reaching into the past to find the source of present tensions that would otherwise be inexplicable. I loved traveling through the book with them all, leading them to a place where they could come as close to contentment as they could find.

“I think there’s a beehive in the courtyard,” Grandpa once said, having stopped at a pretty hotel for lunch one day. I duly leapt up from the table and sprinted outside to investigate. No sign of a beehive. When I returned to the table, our lunch had arrived; two bowls of vegetable soup and doorstop-sized hunks of brown bread. A spoon was already in my soup bowl and I thought nothing of it until I lifted the spoon to my lips, took a mouthful and almost exploded. In my absence, Grandpa had coated the back of my spoon with mustard! To this day, I can’t look at a jar of Colman’s mustard without thinking of Grandpa and how lucky I was to spend time with such a loveable, eccentric and utterly unique human.