God and the author: Neil Griffiths on religion and writing 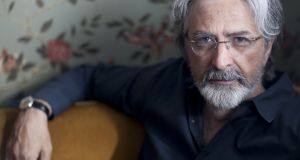 Neil Griffiths: “As a novel As a God Might Be allows me to set aside the question of the existence or not of God, but still ask what his nature might be.” Photograph: Cambridge Jones

When I told a friend that I was working on a novel in which the main character “fears an authentic encounter with God”, he said I should forget trying to get it published this side of the Atlantic, but instead solicit interest south of the Mason-Dixon line. His cultural co-ordinates for God led him straight to US conservative Christianity. This isn’t entirely surprising: Richard Dawkins takes great pains to conflate the two; it is very much in his interest to bind all Christians to creationism, atheists to evolution. While I accept that it’s difficult to separate God and religion, reflexively aligning God to his most extreme adherents isn’t going to move the debate forward. If we’re to understand the role of religion in the 21st century, a degree of theological subtlety is required.

The meaning of God has become lost in battle or, perhaps more accurately, simplified into meaninglessness by the combatants on both sides. This is important: if God ceases to have any common definition in our shared language, he will slowly disappear as an option to make sense of our world. God cannot be a trope for religious extremism or regarded as an insult to the rational mind – that way lies an impoverishment of human life. Richard Dawkins might insist theists are always trying to “smuggle” God into science. But it is also the case that New Atheists often try to smuggle out those qualities of human life that science is unlikely ever to explain.

I am not unsympathetic. Not only was I once an atheist, I still find neuro-science, genetics and evolutionary psychology persuasive disciplines that tend to make hard-line atheists out its practitioners. Friends, family, colleagues have heard me reference them in arguments more than once. It is in my nature to look for material proof, to trust cause and effect; I am a man who likes solutions. But it is also in my nature to accept the truth value of opposing statements – a logical heresy. And ultimately, I do not accept the reduction of most of our higher human faculties – value, meaning, intention etc – to biological materialism. It cannot be that the neuron, a wholly impersonal entity, by great volume alone creates self-consciousness. If I am sure of anything, it’s the unobtainability of some categories of knowledge.

So how does one make that shift from atheist to theist? Generally speaking, in Christian theology, there are two modes of grace: sufficient and efficient. The latter I suspect feels like an unequivocal conversion experience: to be filled with God’s love, irresistibly. The former beckon and guides; but it requires an act of free will: to choose to believe. My experience was very much of the sufficient kind. I was orientated to the possibility of God; the rest was up to me. There were three separate events that led to this first twitching of my spiritual compass. I maintain that the fact two are embedded in Christianity is accidental, and am in no way claiming Christianity’s privilege in these matters.

The first was watching a debate between Rowan Williams, then archbishop of Canterbury, and Richard Dawkins. Williams’s use of language seemed to me subtle and fluid enough to disclose a transcendent subject without resorting to religious language – important for a writer. Second was returning from a Humanist funeral of a friend, sitting in traffic in the sun on the Holloway Road. For the first time, I sensed that life wasn’t the fullest expression of our place in the universe, and with that I could think of the notion of existence beyond our biological and material presence. The third, and perhaps most central, was reading Marilynne Robinson’s Gilead. Rev John Ames is a character of such love and goodness that I began to wonder about the shortfall of love in myself. Was I just a less loving person than Ames? Materialist conceptions of self suggest that our individual capacity to love is necessarily limited by the physical properties that manufacture the chemicals we experience as love. Capacity to love is no different to other facilities: it is determined by our biological make-up. I don’t buy this, and I began to wonder whether we might call upon our selves to become more loving . . . whether it is possible to increase our individual volume of love. And if that is so, how might this happen? Can we really create more love from within ourselves ex nihilo, or is there a source of love we might turn to? It was perhaps only when I asked myself this last question, did I utter (mutter) an answer. Hardly a full-scale conversion, and certainly it doesn’t presuppose a religious affiliation. What it means, I cannot say. That I feel it, I am certain.

But back to my novel. My friend wasn’t entirely wrong. Route publication was difficult. I lost my agent: he didn’t think readers were interested in characters who were interested in such things. Rejection letters began to arrive. One publisher, who very generously described the novel as potentially award-winning, claimed as an atheist, materialist and humanist” she couldn’t support it. But it wasn’t just atheism. The oldest Christian publisher in the world (The Society for the Promotion of Christian Knowledge) called in the novel and then rejected it as “theologically unsound”. This came as no surprise. When my friend suggested I seek support in the US, my response was that while they might read it, their next step was more likely to burn it.

What no one seemed to understand was that I hadn’t written a work of theology or Christian apologetics. Neither had I written a Christian novel or, even more generally, a religious novel. I had written . . . a novel, where, unlike in science, things can be made up and still be true, and unlike with religion, where truth doesn’t require submission to a particular dogma. As a novel As a God Might Be allows me to set aside the question of the existence or not of God, but still ask what his nature might be – a question science isn’t interested in, and, I’m afraid, no longer a question religion can rightfully claim to answer. It’s time for the novel to enter the debate.