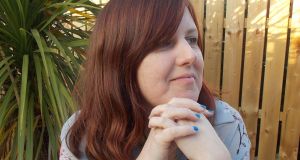 Kelly Creighton: her stories are memorable because of the quality of the writing

If the point of new fiction is to showcase emerging writers, the Belfast author Kelly Creighton is an ideal candidate. Her debut collection Bank Holiday Hurricane is not without some novice signs, most apparent in the flow of certain stories, but it is also brimming with potential. The 16 stories are by turns gritty and moving, with writing that can be both lyrical and stark. Creighton has a poet’s eye for imagery and a novelist’s understanding of the value of a good plot. Her stories pack in a lot in a relatively short collection.

Recurring characters give the impression of an interlinked narrative, a form that has worked so well for authors like Elizabeth Strout, or Donal Ryan here at home, but often the reappearances in Bank Holiday Hurricane are too minor for lasting impact. They are momentary flashes in the reader’s mind, gone again before we’ve registered their import.

The technique works extremely well in the collection’s penultimate and arguably strongest story, Through the Cracks, which tells of a relationship breakdown following the death of a child. The grieving mother describes the experience in unforgettable terms: “A small thing like a bare-footed three-year-old boy can disappear: a small-for-his-age strawberry blond child, whose hair had whitened in fronds around the forehead from your recent outdoor play.” We have met her partner in a previous story where he warned her – now an awful forewarning – to spend more time with the children. The relationship that showed signs of drifting apart is rent forever in the wake of tragedy: “His palm was chalk-dry in mine. I knew he would go: wipe off, rub away, unlike names and dates and stone – nothing is as permanent as names and dates on stone.”

It is a beautifully observed piece of writing that has echoes of Creighton’s contemporaries Elske Rahill, Danielle McLaughlin and Maggie O’Farrell. Creighton’s work has appeared in literary journals such as Litro, the Stinging Fly and Cyphers. She is founding editor of the Incubator, a journal showcasing the contemporary Irish short story. Her debut novel The Bones of It was the San Diego Book Review’s 2015 book of the year.

Characters struggle throughout the collection, from the warped mind of the young mother who ends up in prison in the powerful opening story Bank Holiday Hurricane, to a widow’s need for connection in Alive and Twitching, related in admirably non-sentimental terms. Playoffs experiments with the short story form by broadening the lens to give a successful picture of a family over four generations, and the fleeting decisions that lead to lifelong duties.

The World’s Getting Smaller All the Time vibrantly depicts the clash of personalities, buried resentments and less well concealed jealousies on a double date as a couple prepares to emigrate to Australia.

We meet the bereft father of Through the Cracks in an earlier story that nails a particular type of cab driver – the kind who feigns interest in a passenger’s circumstances as a way to talk about himself. That his life is largely the product of a fantastical mind is a clever twist, which informs a later story, Ouch!, delivered in the guise of a cringeworthy best man speech. Despite some excellent putdowns – “He’s the big one with the face like a Lurgan spade” – the speech itself ultimately feels fictional with the extent of resentment and dislike that pours forth.

The flow of some stories can be confusing. There is too much switching between dialogue, description and back story in Matrimonial Matters as a woman comes back to Ireland to visit the husband of a recently deceased friend. An authorial tone guides other stories – “Here are the lines you know and expect. Do what you must to stay between them” – before moving into the more convincing voice of character. In We Wake When We Wake this translates into an opening section that briefly uses the first person plural and second person voice before settling into the disgruntled third person narrative of Ian as he tries his hardest to cheat on his wife. I Am Mahoro, meanwhile, has an interesting backdrop of war in Rwanda but the accent of the female refugee who now works as a barista in London is overdone and drags the eye.

The lack of seamlessness does not detract from the collection overall, whose stories are memorable because of the quality of the writing. “Rustle is an effortless word,” says the tormented mother as she recalls her former life from prison. Elsewhere, a character’s fingers are “cold as dulse, and purple as a newborn’s”.

The consummate closing story IRL presents the commanding voice of an acclaimed American playwright who used past traumas to jumpstart her career, to the detriment of marriage and motherhood. Though her teenage daughter would argue otherwise, Ellen, like many of the characters in this engaging collection, sees herself as “a psychic in reverse, looking back over a life and telling it differently”.