From MR James to much closer to home, the hauntings that inspired me

Edward Parnell on how he came to write Ghostland: In Search of a Haunted Country 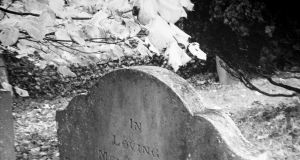 One of the many graves of the Mothersole family in St Peter’s churchyard; the name inspired one of MR James’s most memorable terrors, the spidery witch Mrs Mothersole. Photograph: E. Parnell

My first novel, The Listeners, a nature-tinged, Gothic exploration of family secrets set in an isolated Norfolk village during the early months of the second World War, came out in October 2014.

I should have been excited, because I’d been working on the book since I left my job at a conservation organisation to take up a place on the creative writing MA at the University of East Anglia in the autumn of 2006. It had been a long, meandering trek to publication, with a momentary burst of interest soon after the course finished from a few literary agents and publishers ultimately leading to nothing, before I entered the manuscript into the Rethink New Novels prize and was fortunate enough to win.

Only, the moment I should have looked forward to was tainted, a blur of nothingness, because a few days before I got to thumb through the pages of the physical copy of the book, my brother died. A short illness, a newspaper might have reported, code for the cancer that had claimed him, aged 46, leaving me adrift and rudderless without my closest friend – and without my last link to an increasingly impenetrable set of family memories.

After the book came out, I didn’t write for quite some time. I’d like to say that I couldn’t see the point anymore – and I think that was at least a part of it. But perhaps it was also as much to do with not wanting to embark on the process of developing a work of fiction again with no guarantee of a book deal at the end of it; my experience with The Listeners had made me cautious.

The novel had been well-received by the select audience who had read it – the nature writer Mark Cocker, for instance, wrote warmly about it in my regional paper, the Eastern Daily Press – but coming from a small independent publisher, its reach didn’t stretch far beyond the borders of the county that was my home.

Tracking forward to the beginning of 2017 and I was, at last, keen to start exploring the ideas for a second novel that were starting to awaken in my head. With that in mind I visited Great Livermere, a village in the west Suffolk countryside that harbours a lost history but is most noticeable for the strange, ephemeral, mud-fringed mere that gives a name to the place.

Livermere is also where the Victorian-born writer of ghost stories, Montague Rhodes James, spent his childhood; his father was the local rector. I’d long been a fan of James’s supernatural tales and half-fancied featuring the closed-off, stilted Cambridge don as a minor character in the story I was trying to flesh out. (It wouldn’t be the first time MR James had taken on such an afterlife – Penelope Fitzgerald’s 1990 novel The Gate of Angels features a version of MRJ in the form of the book’s Dr Matthews.)

On that day I wandered extensively, taking photos of James’s old house and St Peter’s graveyard – many of the headstones it holds bear the surname Mothersole, the name James bestowed on the terrifying witch Mrs Mothersole in his story The Ash Tree – later posting an article about the place on my website.

Some weeks later a commissioning editor at Harper Collins read it and emailed me to ask if I’d ever thought about writing a book on the subject of James. So I went down to London to meet him. We got on well, both sharing a love of trashy British horror movies from the 1960s and ’70s – I remember, for example, discussing the zombie-biker flick Psychomania at length, a slice of kitsch that in the end didn’t make it onto the pages of Ghostland.

I went back to Norfolk and thought hard about whether I would like to write such a book – a book concerned with ghost stories and films and the places around Britain that fed into them. And I decided that I did. Because I’d grown up obsessed from a young age with the supernatural and horror. Like a lot of children born in the 1970s, my early years had been surrounded by morbid public information films and terrifying, offbeat TV programmes aimed at, but quite probably unsuitable for, our age group; without knowing it, I was part of what the Fortean Times has come to term the “haunted generation”.

I realised, however, that I only wanted to write about the subject if I could bring something of myself to the narrative. And when I started to do some proper thinking and research into who and where I’d want to explore, I realised that the locations I was considering were connected to my own family – a story which itself could be said to be somewhat haunted… Many of the writers I ended up delving into seemed also to have a wistful, haunted air about their lives; at any rate, these were the ones that most attracted me.

That is broadly how Ghostland came about – morphing after that first meeting with my editor into a more personal and poignant exploration of my memories, revisiting barely remembered destinations we’d come to on long-ago family holidays. And, as I began to explore what MR James refers to as the “sequestered places” of England, Scotland and Wales (though Galway features briefly as the setting of the Edwardian writer of weird fiction, William Hope Hodgson’s masterpiece, The House on the Borderland), the writing of the book became a way of reclaiming something that had been lost to me. A way of trying to give form to those half-glimpsed figures that otherwise lay in shadow on my father’s Kodachrome slides, which languish in my loft in neatly labelled yellow-plastic cases.

I hope – because it is all I can do for them – that my words might somehow bestow a fleeting kind of life back upon those unviewed phantoms.

Upon my ghost family.
Ghostland by Edward Parnell is published in hardback by William Collins (480pp, £16.99).