If I were Irish, I would be very concerned about the EU. And I’m not talking about Brexit 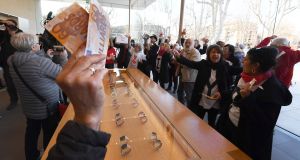 Activists demonstrate inside an Apple Store during a protest against tax evasion in Aix-en-Provence, France in January. Photograph: Boris Horvat / AFP/ Getty Images

Tax is power. Whether the ruler be king, emperor or government, without control of tax revenue, they are powerless. This rule has always applied, from the first king of ancient Sumer – one Alulim, reputedly a contemporary of Adam and Eve, who ruled in antediluvian times for an impressive 28,800 years – to the social democracies of today. Taxes are the fuel on which the state’s operations run. Limit taxes, and you limit ruling power.

Civilisations are shaped by the way they are taxed. A large part of a nation’s destiny – whether its people will be prosperous or poor, free or subordinated, happy or depressed – is determined by its system of tax.

It is, therefore, essential to the success of any nation that it has total control of its tax policy, and the revenues derived.

In this regard, if I were Irish, I would be extremely concerned about what is going on in the EU at the moment. And, believe it or not, I’m not talking about Brexit.

Just about every government in the world has this problem – how to tax the intangible economy? The physical economy might be easy to tax, but the globalised, intangible, digital economy made possible by the internet is something else altogether. Vast swathes of would-have-been profit is owed to offshore structures in low-tax jurisdictions for supplying brands, trademarks, patents and intellectual property. Many international businesses remain deliberately unprofitable in order to reduce tax obligations. Acquisitions, research and development, and other forms of expansion are undertaken so as to have more to write off against tax.

Big tech is the most notorious offender and the EU, perhaps more than any other jurisdiction, has taken the fight to the giants. This fight could have grave repercussions for Ireland. What’s more, it could change the constitution of the EU itself.

In the 1990s, Ireland’s low rates of tax, deliberately set in place by finance secretary TK Whitaker many years before to draw foreign investment, became attractive to multinationals wanting access to the EU. A cheap place to do business, with an English-speaking, educated workforce, Ireland would become the most attractive place in the world for foreign direct investment – the so-called Celtic Tiger. Even this decade, post financial crisis, Ireland has continued to rank at the top of the pile, leading the world for foreign direct investment.

(I should stress that while corporations have benefited from Irish tax policy, Ireland’s workforce have not been quite so lucky, paying rates of 20 per cent and 40 per cent for earnings over €44,300 per annum, along with VAT at 23 per cent – not too dissimilar to rates paid in the UK and across Europe).

Apple was perhaps the most notable company to base itself here (despite the country not being deemed worthy of an actual Apple store) but Apple was by no means alone. Over a thousand multinationals in a wide variety of different businesses made Ireland the hub of their European operations, including Google, Hewlett Packard, IBM, Facebook, LinkedIn, Twitter, Pfizer, GlaxoSmithKline and Genzyme.

The EU has long disliked Irish corporate tax rates, however.

In 2017, after about three years of investigations, the EU demanded roughly €250 million in back taxes from Amazon and the extraordinary sum of €13 billion from Apple, on the grounds that the Irish tax breaks to Apple were illegal and tantamount to state aid. Apple has since paid, but Ireland is holding the money in escrow while the decision is appealed – a process that will take many years.

The worrying inference is that Ireland no longer has the power to enforce its own rates of tax. The outcome of the Apple appeal has constitutional implications for both Ireland and the EU. Who has the power?

But this situation goes beyond the Apple case.

One proposed solution to the problem of the hard-to-tax, globalised, intangible economy is that the EU institute a 3 per cent revenue tax on digital services provided by large corporations. This idea has been gestating for some time and has met with support in some quarters and criticism elsewhere (turnover taxes are highly problematic – profit and turnover are very different beasts – so they affect different businesses’ models inequitably). For any tax legislation at the EU level to be adopted, however, there must be unanimity among member countries, so it is far from certain that such a tax could be enacted. As a result, the EU is trying to change its laws.

In 2017, European Commission President Jean-Claude Juncker said that a “qualified majority” – 55 per cent of member states representing at least 65 per cent of the EU population – should be enough to ensure “fair taxes of the digital industry”. But he also wants this “qualified majority” to enable other taxation, including “simpler decision-making” on VAT, “a common consolidated corporate tax base” and a financial transactions tax. Majority rather than unanimity will “improve our ability to speak with one voice”, he added in 2018.

Such legislation would effectively give Brussels greater licence to impose taxes. It would sideline any smaller countries that might oppose any such rulings, and centralise power in Brussels away from nation states. This would be a major constitutional change to the EU. The implications are tremendous.

This is just one example of the many changes to international and national power dynamics coming in the years ahead, as governments seek to protect their tax revenues.
Dominic Frisby’s book and audiobook Daylight Robbery, How Tax Shapes Our Past And Will Change Our Future, is published by Penguin Business. Come and hear him speak at this year’s Kilkenomics Festival on November 8th