From Dun Emer and Cuala to Gayfield and Dolmen: a history of small Irish presses

The Poetics of Print: The Private Press Tradition and Irish Poetry is a TCD digital exhibition 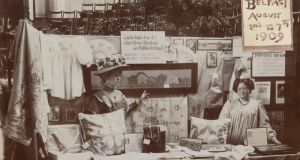 A Dun Emer exhibition and fair

The Yeats sisters are rarely mentioned in the same breath as their poet brother William, but Susan and Elizabeth Yeats were a pioneering duo in Irish publishing and design during the 20th century. Together with English designer and suffragette Evelyn Gleeson, they established the women’s craft co-operative Dun Emer Industries, in 1902, inspired by “a wish to find Irish hands in the making of beautiful things”.

Their remarkable story is brought to life in a new digital exhibition from the School of English at Trinity College, The Poetics of Print: The Private Press Tradition and Irish Poetry. The exhibition digitises and discusses a selection of images from a wealth of original material held by Trinity College in order to illuminate the achievements of four interlinked Irish small publishing presses from 1902 to 1969.

The story begins in a large country house at the foot of the Dublin mountains near Dundrum village. Here the women of Dun Emer set up a flourishing arts and crafts enterprise specialising in embroidery, printing and weaving. Gleeson named the house after the famed figure in Irish mythology, Emer, renowned for her beauty but also for her wit and skill in needlework. Elizabeth Yeats took charge of the printing section of the Dun Emer venture, leading the women-run department and challenging the male domination of the publishing world to revitalise the private press tradition in Ireland.

The Poetics of Print provides a vivid picture of the typical working day at Dun Emer. Gleeson and the Yeats sisters kept large scrapbooks detailing the various plans and projects undertaken by the Industries each year. The pages of each book are pasted with a wonderful array of images and texts, from hand-written poems and short stories to exquisite watercolour illustrations, design templates and advertisement mock-ups.

Early 20th-century Irish society was in the midst of the Revival, and the Dun Emer Press formed part of this broader movement that sought to recover Ireland’s mythic and folkloric heritage. But Dun Emer’s nationalism was also allied with a radical social programme, supporting the emancipation of women through training and education. As Gleeson outlined in 1903, “the education of the work-girls is also part of the idea, they are taught to paint & their brains and fingers are made more active and understanding”. Up to 30 young women from the local area were employed across its three departments and trained in a variety of printing and fine-art skills.

Dun Emer Press succeeded in producing some of the most important works of modern Irish literature, despite working under constant financial pressures and operating unwieldy printing equipment dating back to the 1850s. William Butler Yeats acted as its literary adviser and the press published his collection In the Seven Woods in 1903. Printed in a limited-edition run of 325 copies, this elegantly crafted book was bound in a full case of Irish linen, enclosing delicate pages of beautifully toned mould-made paper. William delighted in Elizabeth’s printing talents, declaring the volume as “the first book of mine that is a pleasure to look at – a pleasure whether open or shut”.

The Yeats sisters eventually parted ways with Gleeson in 1908 to set up their new venture, the Cuala Industries, resettling nearby in a “cottage in its orchard stood in the midst of fields” outside Churchtown village. Elizabeth retained the basic ethos and equipment of Dun Emer for her new Cuala Press, which would go on to publish more than 60 books of poetry, fiction and prose from 1908 to 1946.

The Poetics of Print follows the journey of the Cuala Press into the difficult decades of the mid-20th century, when increasing shortages and an intensifying economic war between Britain and Ireland placed enormous pressures on the publishing market. Cuala’s ambition to produce beautiful limited-edition books was continually hampered by its restricted finances: Susan Yeats described how “we toil all day and all year round and only get in at the Industry something over £800 a year – to pay ourselves what no man over 25 would do clerk work for, we want to get in another £250.”

But despite its financial struggles the Cuala Press carried on the prestigious legacy of Dun Emer in publishing some of the most significant Irish literary works of the mid-century, including The Great Hunger, Patrick Kavanagh’s 1942 epic poem depicting the brutal, lonely realities of Irish small farm life.

The Poetics of Print also explores the influence of Dun Emer and the Cuala enterprise on two later Irish private presses, Gayfield Press and the Dolmen Press. Gayfield operated between 1937 and 1946, run by the poet Blanaid Salkeld and her son, the artist Cecil ffrench Salkeld, from their home at 43 Morehampton Road in Dublin. Using only a small wooden hand press located in their garden shed, the Salkelds nonetheless managed to print an impressive collection of fine limited-edition books and pamphlets for circulation within Ireland’s expanding literary elite.

In turn, Gayfield’s Adana hand-press was acquired in 1951 by Liam and Josephine Miller, who started their own publishing venture in Dublin, The Dolmen Press. The Poetics of Print culminates with Dolmen’s greatest publishing success, its ground-breaking 1969 edition of the Irish epic saga The Táin. Translated from the Old Irish by poet Thomas Kinsella and featuring a series of brush-drawings by artist Louis le Brocquy, The Táin is a work of startling beauty and a perfect showcase for Dolmen’s innovative alignment of traditional material with fresh, modern illustration.

Bringing examples of such work together for the first time, The Poetics of Print exhibition tells an engaging story of the many talented individuals, families, artists and designers behind the business of the Irish small literary press, and sheds light on a remarkable and inspiring chapter in the history of Ireland’s independent publishing tradition.

The Poetics of Print is curated by Dr Conor Linnie in the Trinity School of English with assistance from Prof Eve Patten and the manuscripts and archive specialist librarians at Trinity College Library. Visit the exhibition