I told all the men at a speed dating event I was a writer. Unanimous disappointment 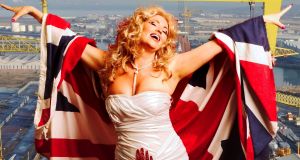 Earlier this year, a book review by the critic Martin Ebel sparked off a furore by comparing Sally Rooney to “a startled deer with sensuous lips”. It’s somewhat apt that Ebel was the one caught like a deer in front of the headlights by so much public opprobrium, but, of course, youth and sexiness sell books, and it’s not only men subjecting female writers to more scrutiny than their male counterparts. I once sat at a table where a female director excitedly mentioned that the playwright Stacey Gregg “has such a great look” as if this was more of a cause for celebration than Gregg’s writing.

However, one of the big problems facing women writers is this: men aren’t brought up to be as sapiosexual as women. Ten years ago I went to a speed-dating event in Belfast where I told a succession of potential dates I was a writer and was met with a unanimous sense of disappointment. “I thought you might be a nurse,” one man said, his face falling.

Edna O’Brien recounts being largely ignored at literary parties by other women who are “idolatrous” of men. In my experience, though, women aren’t alone in indulging in idolatry. I was once on a scheme with two male playwrights, one of whom kept subserviently labelling the other a genius. The only way women can compete with this is to openly call each other geniuses too. After all, literary success is not what you write as much as what’s written about you.

When I think of successful women, I’m reminded of the founder of the Lyric Theatre Mary O’Malley’s quotation about persuading people: “You have to coax them and flatter them and play with them . . . .” To me, that really sums up how women have had to use their nurturing and “idolatrous” skills in order to gain any sort of power.

Before the Waking the Feminists movement, a complaint by any playwright was always dismissed as personal sour grapes, and in Northern Ireland it’s been doubly tough in that the issue of gender equality has always been secondary to the need for religious parity. I remember a male playwright telling me that I should be standing up for the rights of all playwrights, not just female. I know theatre is a wildly competitive world but to deny the statistical imbalance staring you in the face seems almost defiantly insane.

While things have improved, it’s worth recalling how life was before recourse to the #MeToo, #SheToo or #WeToo social media movements. One of my favourite writers, Colette, was locked in her room and forced to write by her publisher husband, the unfortunately named Willy, who took the credit for her books. A really telling read is Double Drink Story by Caitlin Thomas, a writer consigned to the shadow of her famous husband, Dylan. Her contempt for Dylan’s so-called genius drips from every line because she knew perfectly well she could drink him under the table and write him off the page. And look at poor Elisabeth Pepys – Samuel tore up her honest, revelatory letters in a fit of rage and ensured that none of her writing survived as presumably it would have rivalled his own.

Not ‘having a moment’

Last August, the Primadonna Festival ran a panel, entitled Her Breasts Preceded Her Into The Room, questioning whether men can write women. Admittedly, some men have perpetrated howlers when writing about women’s bodies – take for example Martin Amis in The Pregnant Widow: “How was it that he had never taken due note of this – the beauty, power, wisdom and justice of women’s thighs”.

But it’s unfair to solely pick on men here. A renowned novelist and short story writer revealed to me she’d never written a story from a man’s perspective as she “can’t do men”. That’s almost as bad as saying, “I can’t write human beings; I can only write cats”. In my case, there’s only one subject I’m less likely to write about from a male point of view and that’s sex as I don’t have the anatomical wherewithal to experience it. I know it’s true that a man’s brain is slightly bigger than a woman’s, but, as men say themselves, size doesn’t matter – it’s how you use it that counts!

O’Brien said in a recent interview, “I have always been attacked. I partly think it’s to do with being a woman . . . and with the assumption that I approach themes that I shouldn’t”. Far too many of us have had the same experience. The academic Fiona Coffey in her book, Political Acts, noted from the critical reception to my play, The Bonefire, that I seemed “to have been punished for writing such a play”, contrasting it to the admiration won by Martin McDonagh’s similarly blackly violent work. It’s apparent that women for a long time have been overpraised for their appearance and underpraised for their work. Any time I achieve success now, I always dedicate it to my mother who, because of family and society’s circumstances, had her ambitions to be an artist thwarted. It’s given me double the ambition.

The good news is that Northern women like Jan Carson, Wendy Erskine, Lucy Caldwell and Bernie McGill are now challenging the tedious tourist-guide dominance of CS Lewis and Seamus Heaney. However, it’s important to say that we aren’t representatives of some amorphous, happy-clappy movement but unique individuals intent on carving our own place in history – without having to look like sensuous-lipped, namby-pamby Bambis. From now on, I’m going to ask reviewers to stop referring to us as “a wave of women writers” who are “having a moment”. The thing is we’re not a wave, as waves pass by; and we’re not having a moment, because this is our time and we’re taking over our era.
Rosemary Jenkinson’s fourth collection of short stories, Lifestyle Choice 10mg, will be published in 2020 by Doire Press. She is a current recipient of the Arts Council of Northern Ireland’s Major Artist Award and was writer-in-residence at the Leuven Centre for Irish Studies last month