This Land is Our Land: An Immigrant’s Manifesto review 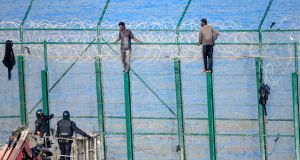 Two migrants try to enter the Spanish territory of Ceuta, among 150 others who stormed the barbed-wire border fence with Morocco. Photograph: Antonio Sempere

Book Title:
This Land is Our Land: An Immigrant’s Manifesto

Even liberals among us, who agonise over “genuine refugees”, often draw the line at “economic migrants”. But apart from the odd sea vessel marooned between European harbours, we rarely hear much since the EU’s cynical deals with Turkey and Libya’s coastguard; as rescue workers such as Irishman Seán Binder are quietly criminalised. RTÉ recently reported that “150 migrants broke through the border fence at Spain’s North African enclave of Ceuta” over footage of tooled-up riot cops kettling injured young African men. RTÉ added: “Ceuta is a magnet for illegal African migrants trying to reach Europe.” Illegals. Aliens. Stateless. Criminals. Rapists.

Indian-American author Suketu Mehta demolishes such xenophobia in this passionate jeremiad. When young Mehta emigrated with his family to NYC in 1977, his mother was forbidden to disembark in Germany as her British passport (as a citizen of Indian origin born in pre-independence Kenya) had been rescinded, along with hundreds of thousands of others. Her father had worked his entire life in colonial Kenya, and Mehta’s larger family still roved the globe. Now, visiting India, Mehta feels “no longer wholly Indian”: instead, a cosmopolitan New Yorker with a passport to prove it.

He was bullied at a “brutal” Catholic school by “a boy called Tschinkel” long before “another German-American bullyboy from Queens” became president. That event, which left “knots of people weeping on streets all over Lower Manhattan”, has left him angry as hell, and he doesn’t give a rat’s ass about using blunt language, so riled is he by the rise of neo-nationalism, both in India and his now toxically polarised homeland.

In tackling migration, Mehta syncretises a host of global issues with jaw-dropping stats, trends and histories. He travels to places like Ceuta and hears woeful tales, like the woman wading out to a traffickers’ boat when a wave swept her little baby away; the Central American women who stockpile contraceptives ahead of the rapes that punctuate their passage north; or the families that touch fingers or get married through the fence at Friendship Park, where the US-Mexican border ends in the Pacific.

People migrate for all sorts of reasons: fleeing war, ethnic cleaning, environmental devastation; colonial legacies which have left countries murderously uninhabitable; or simply to make a better life for their kids.

Mehta is one of a quarter-billion people (one in 29 humans) living in a country other than their birthplace. Since 1960, such numbers have tripled but remained stable relative to the world’s population. But mass migration will soon effect seismic change. Last year, the US census reported that America will become “minority white” in 2045.

By 2050, the population of African cities is set to triple, from half a billion to 1.5 billion; the sub-Saharan working-age population to increase by 800 million, many to head north to Europe – for all the walls and fences, and the armies and navies that even now tear-gas and shoot at them.

Mehta maps a lingering, global white supremacism. He is scathing of British imperial “divide and rule” in India, favouring the Muslim League to sap the nationalist movement. He sees the 1905 partition of Bengal – and the 1932 Communal Award which set up separate electorates for all sorts, from Muslims and Sikhs to Dalits and academics – as prefiguring the horrors of Indian partition in 1947. Two million were killed and 14.5 million displaced; the greatest mass migration in history, and a “disastrous lack of foresight on the part of Lord Mountbatten, the last viceroy, and his superiors in London”. Mehta notes this may still “imperil the planet”. After Modi’s incendiary power grab of Kashmir, India and Pakistan, both nuclear powers, now risk of “a fourth and final war”.

For Mehta, “corporate colonialism” now reigns; recalling the 1994 Bhopal disaster when US multinational Union Carbide’s pesticide plant blew up after safety cutbacks; killing more than 20,000 Indians and maiming another half-million, while genetic defects persist. Today, corporations shift up to 40 per cent of profits between tax havens, draining developing countries of three times more than the aid they receive. In 2011, tax havens held $4.4 trillion of their wealth; $150 billion suctioned off annually from Africa alone.

Mehta calls for more open borders as “reparation” to such countries’ citizens. After all, both low- and high-skilled immigrant workers toil harder, pay taxes and enrich societies; not least demographically dying ones like the US or EU member states. Some reparation already exists: in 2018, migrants sent home $689 billion from wealthy nations: four times more than all foreign aid and 100 times more than all debt relief has delivered.

Mehta’s polemic was met with death threats in the US this summer, but globally, it has gathered momentum. One wishes, at the Serbian-Hungarian border, he had paid more attention to south-central Europe’s militarised migrant camps, but this punchy, opinionated speed-read is an eye-opening primer on a radioactive topic; and is often very beautifully written.