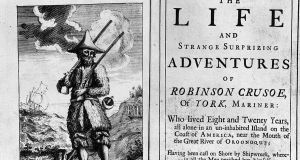 The title page of the first edition of Robinson Crusoe. Photograph: Ullstein Bild via Getty

Daniel Defoe’s Robinson Crusoe is 300 years old on April 25th. It is often regarded as the first novel in English, although this has been disputed, and is generally accepted as initiating the genre of realistic fiction. Its enormous popularity is not in doubt, and probably continues to some extent, but what might not be so widely realised is just how extensive and enduring its literary legacy has been.

While it has also inspired stage plays, operas and many films, it is its literary legacy that is the subject of this discussion.

The English writer and journalist Robert McCrum has argued that, like Bunyan’s The Pilgrim’s Progress, Defoe’s novel “follows an almost biblical pattern of transgression (youthful rebellion), retribution (successive shipwrecks), repentance (the painful lessons of isolation) and finally redemption (Crusoe’s return home). In storytelling terms, this is pure gold,” according to McCrum, who pointed out that by the end of the 19th century, “no book in English literary history had enjoyed more editions, spin-offs and translations … with more than 700 alternative versions, including illustrated children’s versions”.

Robinson Crusoe marked the beginning of realistic fiction as a literary genre, and it is understandable that its success should have led to many imitators. (The German writer Johann Gottfried Schnabel coined the term “Robinsonade” in 1731 to describe these imitations.) It could be maintained that 18th- and 19th-century spin-offs were mainly imitative but that the 20th century produced more counter-narratives than duplications.

The individual and society

A very early rejection of Defoe’s optimism about the individual’s capacity to exploit nature and thrive no matter what the circumstances was Jonathan Swift’s Gulliver’s Travels, published just seven years after Crusoe. Warren Montag, who wrote The Unthinkable Swift, believed that Swift was anxious to refute Defoe’s belief that the individual was antecedent to, and therefore more important than, society.

But Swift was the exception, and writers such as Ambrose Evans, John Barnard, Penelope Aubin and many others produced imitative castaway novels that proved popular in the 18th and early 19th century. Most of these have been forgotten but one that has endured is The Swiss Family Robinson (1812), originally written in German by a Swiss pastor, Johann David Wyss, which borrowed the first name of Defoe’s hero for its title.

Three other 19th-century novels influenced by Crusoe, which could be said to have stood the test of time, are The Coral Island by RM Ballantyne (1858), The Moonstone by Wilkie Collins (1868) and Treasure Island by Robert Louis Stevenson (1883). Strictly speaking, The Swiss Family Robinson and The Coral Island are not true Robinsonades in that nature on the islands featured in those novels is bountiful and benign whereas in Crusoe it is barren and harsh but the influence is obvious.

The influence on The Moonstone would be less obvious, as it is generally regarded as initiating and establishing the writing formula for the detective genre. However, Gabriel Betteredge, one of the novel’s main characters and narrators, displays great faith in Defoe’s work and seeks to use it as a means of seeing into the future and working things out. He regards it as the finest book ever written, is happy to re-read it frequently and considers anyone who has not read it to be poorly read.

Treasure Island was partly inspired by The Coral Island (and therefore indirectly by Robinson Crusoe), Stevenson saying he admired the “better qualities” of Ballantyne’s book. But he could be said to parody Crusoe’s character in Ben Gunn, who is a friendly castaway who was marooned for many years; his appearance is wild, his entire dress is goat’s skin and he chatters constantly about providence. Stevenson’s island is also different from Ballantyne’s or Defoe’s: it is not a place to live but merely one on which to dig for treasure.

The 20th century saw a change in attitude towards Robinson Crusoe and its progeny. To James Joyce, the eponymous character was “the true prototype of the British colonist” and he regarded the “whole Anglo-Saxon spirit” as being in Crusoe: “the manly independence, the unconscious cruelty, the persistence, the slow yet efficient intelligence, the sexual apathy, the calculating taciturnity”. Joyce pinpointed a common 20th-century reaction to the novel, which was that it reflected and embodied the mentality that led to the British empire.

Of the novel’s descendants, The Coral Island probably exemplifies most clearly this imperialist perspective in the way the boys recreate a society on the island that exactly mimics the one they have left behind. The most stinging novelistic counterblast to Ballantyne’s novel (and therefore Robinson Crusoe as well) is William Golding’s Lord of the Flies (1954), which has been referred to as “The Coral Island in reverse”.

Commenting on the relationship between the two books, Golding said that Ballantyne’s novel “rotted to compost” in his mind and in that compost “a new myth put down roots”. There are a number of very deliberate and overt references in Lord of the Flies that indicate Golding’s undermining of Ballantyne’s fantasy. The Coral Island presents an optimistic (some would say smugly imperialistic) vision of three boys who, although lacking the structures, controls and supports of society, are still able to co-operate for the common good and against the savage forces threatening them.

Golding’s vision is much more pessimistic. One of his most salient and obvious themes is that society holds everyone together, and without these conditions, our ideals, values and basic morality are lost. Without society’s rigid rules, anarchy and savagery can take over. Another major difference is Golding’s belief that evil comes from within and is not something extrinsic that can be easily confronted and overcome.

A voice to the oppressed

A very interesting later 20th-century take on Robinson Crusoe is JM Coetzee’s Foe (1986), about a woman looking for her kidnapped daughter who is set adrift during a ship’s mutiny and lands on an island where she finds Cruso (spelt thus) living contentedly with Friday, who cannot speak. The three depart for England but Cruso dies en route. In England she tries to get a writer, Daniel Foe, to help her tell her and Friday’s stories. Critic Denis Donoghue saw one of the novel’s central themes as the need to give a voice to the oppressed, whether Friday or the woman.

An indication of how pervasive Robinson Crusoe’s literary influence has been is to consider how it has extended into languages other than English as well. Two significant examples of very fine novels from other languages, translated into English, would be Friday, or the Other Island (published in French in 1967 as Vendredi ou les Limbes du Pacifique) by Michel Tournier; and Kruso (German, 2014) by Lutz Seiler.

Tournier’s novel explores such themes as civilisation versus nature, the psychology of solitude, and death and sexuality. Rather than Crusoe converting and controlling Friday, it’s the other way round, and Crusoe chooses to remain on the island, rejecting a chance return to “civilisation” when offered it after 28 years.

Seiler’s Kruso and his Friday, Ed, are on a busy, not deserted island (Hiddensee in the Baltic Sea, a sanctuary for dropouts and dreamers and the place from which many East Germans tried to swim to freedom in Denmark during the communist era) but both are castaways from society. With the collapse of communism, the need for their idyllic island retreat evaporates, leaving them to face a new reality.

In non-fiction, the novel inspired Tim Severin, who is well known for retracing the journeys of historical explorers, to probe the world of sea navigation familiar to Defoe. He retells amazing survival stories of sailors, pirates and castaways of the time, retracing their journeys to experience for himself the adventures that inspired Robinson Crusoe. As well as camping on islands where famous castaways once survived and undertaking dangerous sea voyages, Severin searched Nicaragua and Honduras for the Miskito, the indigenous tribe that Friday was modelled on. The book, In Search of Robinson Crusoe, is an intriguing fusion of history, literature and travel adventure.

‘There is something very cool about Irish people’
3