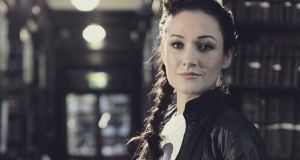 Alex Barclay: I Confess is funny, sad and moving

Once she has been welcomed to adulthood, Romy is assigned to the physic garden as both forager and protector covering the whole of Plas Golau, “ripping up Destroying Angels as they sprout, plucking out the hemlock, the ragwort, the henbane, the bryony, the water dropwort, the nightshades”. That is before the End, before the mass suicide of the cult she grew up in and which she will survive. Romy’s grandparents ran a cult of their own, believing that Jesus would one day return, and when he did, he would choose to live in Finbrough, a small town in Suffolk where they have built him a house; when their 17-year-old daughter (Romy’s mother) became pregnant, they cast her out. Romy, who is pregnant, must learn to navigate a strange world and find a place of safety, while dealing with more than one dark past. Epic in conception and meticulously plotted, Alex Marwood’s The Poison Garden (Sphere, £12.99) might be described as a dystopian eco-thriller; as the title suggests and the nightmarish opening scene demonstrates, the serpent is very much abroad in this paradise. But there is something that speaks very much to the present about Marwood’s vivid rendering of the cult’s intimate relationship to the natural world. Violent and bleak, but always salted with sardonic wit, this is a distinctive, brilliantly imagined piece of work with a ruthless, resourceful heroine and an unexpectedly optimistic ending.

Trouble in paradise abounds this month: Those People by Louise Candlish (Simon & Schuster, £12.99) revisits the themes of her breakout 2018 bestseller Our House: mid-life marital stress; property obsession; status anxiety and bourgeois fear of falling. As Ralph Morgan drives home, he proceeds along “a sliding scale of house sizes – and prices – from pretty workman’s cottages through narrow three-storey terraces to the large detached Victorians… indisputably the prize properties”. Ralph and family occupy No 7; next door lives his brother Finn. Ralph’s wife Naomi is the “co-founder of a website for mums of preschoolers”, and looks “like a wife in a commercial”; her “Play Out Sunday” initiative to clear the streets of traffic so the kids can play the old-fashioned way, no screens, no consoles, garnered her an award from the mayor. Into this model village arrives Darren Booth, who inherits the corner house, immediately installs seven or eight second-hand cars and vans on both sides of the street (parking is unrestricted), and embarks on a series of renovations that scatter dust everywhere, but especially into No 3, home to Ant and Em Kendall and baby Sam.

At night, Darren relaxes with partner Jodie by getting drunk and listening to heavy metal at earsplitting volume; when Ant complains that Sam is crying very loudly, Jodie assures him that it’s not a problem and turns the music up. A “welcome to Lowland Way” visit is rebuffed; Play Out Sunday is ignored; the B&B across the way loses custom. Hostilities escalate, culminating in a death on Darren’s property; imagine the neighbours’ outrage when the police appear to think that “those people” has more than one interpretation. Candlish has a keen, satirical eye for social hypocrisy, and she skilfully explores the tensions that the situation exposes in her entitled, privileged characters with compassion and nuance. An unsettling, darkly funny, artfully composed novel about the way we live now.

Rowan Caine recounts her experiences as a live-in nanny at Heatherbrae House in the Scottish Highlands, where all is not as it seems: the children are hostile or disturbed; the house is haunted; the handsome groundsman seems too good to be true

The Sleepwalker (doubleday, £12.99) is Joseph Knox’s third Aidan Waits novel, and it is the best of the three. Recently released killer of a mother and four children Martin Wick is dying in a hospital bed; his last words to Waits, who has been assigned to extract from him the location of the one missing body, amount to a declaration of innocence. Into the frame rolls the father who was absent from the scene, the cop who secured the conviction and wrote a book about it and, inevitably, Zain Carver, Waits’ gangland nemesis. The Sleepwalker has all the virtues of a high-energy police procedural, with Waits often seeming at greater risk from his superiors than from his foes, but like its predecessors, it is spiritually and tonally in thrall to classic PI fiction, with an anguished, driven, compassionate detective desperate to do the right thing; mesmerizing depictions of Manchester by night; a plot that is baroque in its shimmering complexity and overall, an hallucinatory power that borders on the uncanny.

When I read Joseph Knox, lines from Hardboiled America, Geoffrey O’Brien’s classic study of the genre (and one literary novelists suffering from a chronic lack of intellectual curiosity might do well to consult) spring to mind: “He reads it as another might read a lyric poem – because its images sustain the life in him.”

Ruth Ware has been called the Agatha Christie of her time; her new novel, The Turn of the Key (Harvill Secker, £12.99), tips its hat to an even earlier sub-genre, the “Had I But Known” school pioneered by Mary Roberts Rinehart. Written in epistolary form to a solicitor from the prison cell where she awaits trial for the murder of a child, Rowan Caine recounts her experiences as a live-in nanny at Heatherbrae House in the Scottish Highlands, where all is not as it seems: the children are hostile or disturbed; the house is haunted; the handsome groundsman seems too good to be true. Ware is an accomplished storyteller, and Rowan’s needy, anxiety-laced narration builds tension and atmosphere effectively. If the plot’s revelations rely a little too heavily on key characters’ refusal to divulge crucial information to a degree that is in one case positively passive aggressive, that doesn’t detract from the compelling sweep of this assured neo-Gothic chiller.

Apart from Darkhouse, her debut, parts of which took place in Waterford, Irish author Alex Barclay has located her work in the US. I Confess (Harper Collins, £12.99) marks a departure in more ways than one: it’s a standalone, set entirely on the Beara Peninsula, tacking deftly in time between a birthday party reunion of six fortysomethings in the present day and their childhood and teenage years. Golden couple Johnny and Edie have remodelled the convent and industrial school at Pilgrim Point into a Condé Nast Traveller recommended Irish country house, and are hosting the evening. Banquo at the glamorous feast is Jessie, who died in a fire when she was 16; before the night is through, will all of her friends join her? It’s a classic set-up, and Barclay stages it with aplomb, scene following scene as the revels lead to recriminations, then to revelations, and finally to murder. The flashbacks are especially affecting, with a real feel for children and young adults and a pervasive sense of shame and fear; the dialogue throughout is a scabrous joy; the whole unfolds in a delirious frenzy. I Confess is funny and sad and moving, a page-turner and a treat.