The best new crime fiction: books for you to murder this Christmas 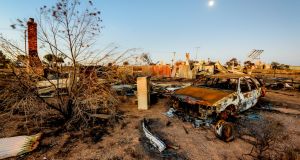 2018 was an especially momentous year in Australian crime fiction. Jane Harper’s second novel consolidated and enhanced the reputation established by her bestselling debut, The Dry, while the sad passing of Peter Temple was marked by a succession of glowing testimonials to the outstanding quality of his work overall, and in particular to the enduring power of his finest achievement, The Broken Shore, one of the greatest crime novels ever written.

Scrublands (Wildfire, £16.99), Chris Hammer’s incendiary debut, shares elements of each writer’s work: the isolated rural town of Riversend, heat-blasted and drought-ravaged, and the apparently inexplicable slaughter of five men by the local priest that sets the book in motion are both redolent of The Dry; while the subtle characterisation, sophisticated depiction of the interplay between the press and the police and vivid evocation of landscape bring Temple (who taught Hammer journalism) to mind, not to mention the sheer quality of the writing: five pages in, a single lane bridge is “slung across the flood plain, long and rambling, dessicated planks shrunken and rattling, bolts loose, spans bowed”. Not every crime writer can write like that; few even want to.

The story – burnt-out journalist Martin Scarsden arrives in Rivershead on the anniversary of the massacre to take the temperature of the town, and finds it seething with enmity and ready to blow – is well worked, rural New South Wales is brilliantly rendered and the book is worth reading for the bushfire set piece alone: “the clouds that just a moment ago were black as coal are turning blood red, bathing the yard in orange light. And he can hear something in the distance, above the wind; a roaring, like a freight train heading straight toward them.” It’s not perfect – there are too many unnecessary recapitulations of the plot, and the main female character, Mandalay Blonde, is, as you’d guess from the name, a bit of a male fantasy projection – but Scrublands is a rattling good read, ambitious in scale and scope and delivering right up to the last, powerfully moving page.

There are many things to like about Darkest Truth (Arrow, €14.99), Catherine Kirwan’s first novel. In Finn Fitzpatrick, solicitor and accidental detective, she has created an attractive lead character with a fluent, authentic voice, a self-deprecating manner and a nice line in irony. The Cork setting is authoritatively done, and she is amusing about the second city’s distinctive brand of thin-skinned chauvinism. The story is told at a propulsive rate, the legal details are persuasive and the dialogue is excellent. The plot – about the suicide of a young woman and its possible roots in her abuse by Ireland’s most famous, Oscar-winning film director – speaks very much to the current moment, and Finn’s sense of mission on behalf of this and other victims imbues her with purpose and drive. The difficulties arise because there is no real attempt to cast doubt on the prime suspect’s culpability, and it feels like an opportunity missed: the glamour and dark allure of such a potentially complex character is dispelled almost immediately, and we are left, with the narrator, to agree that bad people who do bad things are bad, and little in the way of suspense or jeopardy. For all that, Kirwan is a writer of some potential, and will learn to assert less, dramatise more and defer her revelations.

The Kingdom of the Blind (Sphere, £19.99) is the first of Louise Penny’s Armand Gamache novels to have been written since the death of her husband, Michael. In the moving acknowledgments, she says she had no intention of starting or faith in completing a new book, not least because he had been the inspiration for her detective. But somehow, as she wrote, Michael’s presence made itself felt, and seemed to infuse the pages with all they had shared together. The Kingdom of the Blind picks up where Glass Houses left off, with a plague of Carfentanil about to hit the streets, the deadly result of Gamache’s hard choices. With Gamache’s future in the Sûreté in peril, his son-in-law Jean-Guy must takes sides, even as they combine to investigate a family plot involving a seemingly delusional bequest and nefarious financial shenanigans. If Three Pines feels a little less cosy this time round, it is the depth of winter after all, with a terrifying snow storm taking centre stage and casting an icy pall across a novel that displays all of Penny’s usual nuanced humanity, but also a cold and devastating rage against the dying of the light.

Celia Fremlin has been called Britain’s equivalent to Patricia Highsmith. Her recent rediscovery owes a great deal to Sarah Weinman, who included a Fremlin short story in her domestic suspense anthology, Troubled Daughters, Twisted Wives. Her first novel, The Hours Before Dawn, won an Edgar in 1960. The Long Shadow (Faber & Faber, £8.99) was originally published in 1975, and it sees Imogen, recently widowed, at once secretly relieved at Ivor’s death and adrift in grief: “… she stood quite still in the pitch dark and the silence, waiting for loneliness to strike. It was like waiting, when you have stubbed your toe against a rock, for the pain to begin.” With Christmas approaching, first her stepson and then her stepdaughter and children move in, and Imogen’s mixed feelings are subsumed within the turbulent claustrophobia of the family home – and then comes a series of strange occurrences: the boys see their grandfather dressed up as Father Christmas; a manuscript in Ivor’s hand is added to nightly in his study: is Ivor really dead? Fremlin had an unsparing eye for domestic disharmony, especially when it came to women, and combined it with a satisfyingly eerie atmosphere in this delightfully dark “Christmas story with a difference”.

And finally, Shedunnit is a new podcast devoted to the Golden Age of detective fiction, focusing on the Queens of Crime and their contemporaries. Written and presented by the entirely splendid Caroline Crampton, late of the New Statesman, it explores the social, political and literary background to the traditional mystery. Episodes so far have examined the influence of the Crippen case on crime writers, the phenomenon of surplus women in the aftermath of WW1, the incidence of “queer clues” scattered throughout the books and the real life disappearance of Agatha Christie. It is already essential listening for any dedicated mystery reader.