D-Day 75 years on: the Irish who shared in ‘the fury of an aroused democracy’

Thousands of Irish, native-born and diaspora, hit the beaches at D-Day’s bloody dawn 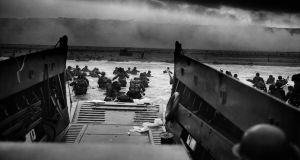 US troops rush to the Normandy beaches during the D-Day landing. Photograph: Photo12/UIG via Getty Images

The realisation of the D-Day offensive on June 6th, 1944, 75 years ago, is a tribute to what Gen Dwight D Eisenhower, supreme commander of the Allied expeditionary force, called “the fury of an aroused democracy”.

This desperate battle wrestled Europe from the horrendous spectre and reality of Nazi tyranny, and it left behind a most honourable legacy of freedom that has been enjoyed by generations. Those who fought on D-Day, Irish among them, honoured us with their self-sacrifice, and so we must honour them now.

There were Irish involved in the devising and revising of the D-Day plan, and in the command and coordination of the battle. There were many fighting the fight from dawn on D-Day until the war’s end in Europe on VE Day. There were doctors, nurses, priests and engineers. There were Irish people of all types, manner and shades of participation, but their collective contribution has not, heretofore, been collated and considered in terms of its true extent and value.

Some 120,000 Irishmen – 70,000 from “neutral” Ireland, south of the border – joined the British army. Many of them agreed with the concept of the Irish State’s neutral stance, but believed that in the face of such global aggression continued neutrality was morally indefensible; that while states have a right not to fight, they do not have a right to let others fight and die for them. These men wanted to do more to defend Ireland, to stop Hitler and his hideous Fascist regime.

Not all motives were altruistic, of course. Some joined the army for adventure, for money, for fear of missing out, or because of family traditions. For a wide range of reasons, Irishmen in their thousands went in on D-Day wearing British, US and Canadian uniforms. Some had been parachuted in behind enemy lines in darkness pre-H-Hour, others were in the skies above, and more still were on the shore-bound landing crafts and on naval ships all along the Normandy coast. Thousands of Irishmen, native-born and diaspora, hit the beaches during the bloody dawn of D-Day.

This was actual, active D-Day involvement, and I believe it is vital that we bring it out of the dark corners of Irish history and make the public aware of its extent and importance. It may have taken 75 years to bring the issue fully into the light, but there is much to learn from conversations about the Irish at D-Day that has relevance in these rapidly changing, uncertain, troubled times.

Ireland may have declared itself neutral, but it fell far short of the strict impartiality requirements involved. The country was clearly on the side of the Allies, and as such was not neutral at all. As well as revealing the significant involvement of the Irish on D-Day, I hope my new book, A Bloody Dawn, will prompt readers to consider and confront the difficult issue of neutrality, and perhaps inspire dispassionate discourse and debate on the issue that will debunk myths, misinterpretations and misinformation.

D-Day was also the dawn of “The Second Front”. Enormous in its scale, magnificent in its execution, and majestic in its very being, this was the largest amphibious invasion force in history. This gigantic war machine hit the beaches at dawn, but within this collective colossus, this gargantuan air and sea armada, there were human beings, many of them young, new to battle and understandably terrified.

At midnight on D-Day, among the survivors, the wounded and the dead, were many thousands of Irish, those born on these shores and those born into Irish families abroad. How startling it is, then, that today so few Irish people around the world aware of their sacrifice.

A SNAPSHOT OF IRISH INVOLVEMENT

Irishman Brendan Bracken was a long-time friend and adviser to Winston Churchill. Born in Templemore, Co Tipperary, he was the second son of Joseph Bracken, a builder and monumental mason, a member of the Irish Republican Brotherhood and one of seven founder members of the GAA. Brendan Bracken chose to play down his background, and over time – through the overlapping of his successful newspaper-publishing and political careers – he was to become part of the British establishment and a close friend and confidant of Churchill. He was Churchill’s parliamentary secretary (1940) and minister for information (1941-45), and he was subsequently elevated to the peerage as Viscount Bracken of Christchurch in 1952.

Lord Killanin (Michael Morris) was a major in the 30th Armoured Brigade and had close involvement in D-Day as part of the 79th Armoured Division. He was their brigade major going in, and his actions were rewarded with an MBE. What is less well known is that his Irish wife was also awarded an MBE for her work as a codebreaker. Here were two Irish persons, a married couple, both in receipt of MBEs for their wartime activity.

The specialised armour of the 79th Assault Squadron of the Royal Engineers deployed their “tanks that could swim” on D-Day. The Double Duplex or DD tank had canvas sides that protruded a foot above water level and wrapped completely around. This canvas wraparound contained tubes that when inflated with compressed air allowed the tank to float. The Sherman tank’s engine was connected to two propellers that then allowed it to “swim”. These were, however, vulnerable to being swamped by waves in choppy waters or rough seas, which happened at Omaha, but not on Sword, where 31 DD tanks and Armoured Vehicles Royal Engineers (AVREs) were successfully deployed.

The AVREs were the brainchild of Gen Sir Percy Hobart, whose father was from Dublin and whose mother from Co Tyrone. His widowed sister Betty had married Gen Bernard Law “Monty” Montgomery, who had his own deep Irish family connections in Co Donegal. “Hobart’s Funnies”, as the American GIs called them, were custom designed on mostly Sherman tank chassis (some still complete with gun) to clear minefields, burst open concrete bunkers, fill in large dug-out tank traps, transverse soft terrain, act as terrifyingly effective mobile flame-throwers, and tackle a host of other on-beach and in-land obstacles to advancing infantry and armour.

Getting that infantry and armour onto the beaches at speed would not have been possible without the Higgins Boat. Irish-American boat designer Andrew Higgins developed the LCVP – the Landing Craft Vehicle Personnel – and his contribution to the war was of immense significance. Previously, landings were only possible at ports and harbours, but Higgins’s 23,000 boats facilitated surprise, supplies and speed to the allies on D-Day. In 1964, Eisenhower himself said that “He is the man who won the war for us. If Higgins had not designed and built the LCVP, we could never have landed over an open beach. The whole strategy of the war would have been different.”
A Bloody Dawn: The Irish at D-Day by Dan Harvey is published by Merrion Press