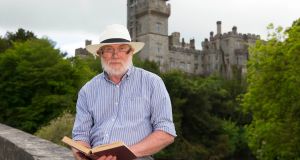 Almost 17 years ago, a public meeting was organised in the heritage town of Lismore with a view to coming up with ways to attract visitors to our beautiful and historic town, a designated tourism centre with little if any “industry” of the factory type but much industry of the creative sort.

It was at that meeting, in September 2002, that the Lismore Immrama Travel Writing Festival was conceived. Nine months later its birth took the form of the inaugural event in what has become a short but distinguished history, as the only stand-alone English-speaking festival of its kind.

Why travel writing? There were three principal reasons:

Lismore had a university between 1,000 and 1,500 years ago which educated and prepared pupils to travel to the continent. The name itself, Lis (fort) and Mor (big) is derived from the round hill or great Irish fort to the east of the town. In 636AD St Carthage founded a monastery here and, with that monastic settlement, the area became a seat of learning whose fame spread all over Europe.

Secondly, during the renovations of Lismore Castle in the early 1800s, a secret room containing the Lismore Crozier and the Book of Lismore was found. An Irish vellum manuscript compiled in the early 15th century, the Book of Lismore contains the writings of Marco Polo, among others. Its original name was Leabhar Mhic Cárthaigh Riabhaigh (The Book of MacCárthaigh Riabhach) and should not be confused with the similarly-named Book of the Dean of Lismore, a Scottish manuscript from the 16th century.

The Irish version was commissioned by Finghin MacCarthy Reagh, 8th Prince of Carbery, and his wife Lady Catherine, daughter of Thomas FitzGerald, 7th Earl of Desmond.

Lastly, Lismore is the home of Dervla Murphy, renowned travel writer and author whose books detailing her intrepid journeys to some of the globe’s most far-flung and inaccessible territories have literally put the town on the map.

Since then, more than 100 authors have spoken at and read at Immrama, to over 30,000 people who have attended during those 16 years, with about 35 per cent of our audience returning at least once.

Audiences have come from Australia, the US, the UK, the Netherlands, France, Canada and, of course, Ireland.

Each year’s schedule has events taking place in several venues across the town and travel writing in the context of Immrama is defined as the experiences and anecdotes obtained while travelling in other cultures and peoples.

Every year’s festival is based upon a different theme and presenters are chosen and contacted based upon fitting into this annual motif, (and availability and affordability, of course). By its concept and its location, in a relatively small rural town, Immrama is a small festival and financially dependant on grants and sponsorship.

The 2019 theme is Extraordinary Events and this year’s version runs from June 12th to 16th.

The first event on June 12th is the showing of a documentary on the Irish peacekeeping effort in September 1961, CongoL An Irish Affair, when the Irish soldiers became embroiled in what is now commonly known as the Siege of Jadotville.

On Thursday, June 13th, Dr Robyn Rowland, of Irish-Australian origin, will share her personal experiences of her travels through the old Ottoman empire, among other things, and the way strange meetings can feed journeys, if open to adventure (for example, dancing with the gypsies in Edirne) and covering places in Turkey, Bosnia, Serbia and India.

Journalist and editor Lerato Mogoatlhe has been writing about Africa for more than 10 years and Vagabond: Wandering Through Africa on Faith is a result of her deep-seated love for Africa and her conviction that whatever else this continent is, it’s firstly and most importantly her home. She will speak on Friday, June 14th, on this topic.

Donald Brady has been giving presentations for a long time on aspects of the county’s history, fitting in with the overall theme of Immrama being a travel writing festival, and on June 15th he will give a presentation on Regina Mary Roche and ask if Regina was Waterford’s foremost novelist.

Other guests this year include Charlie Piggott, a founding member of traditional music group De Danann, who will combine his experiences of his musical travels with some traditional music; Neil Oliver who will give a presentation on Saturday afternoon narrating his experiences as an archaeologist, historian, writer and presenter of the BBC documentary series Coast; and Sarah Outen, the first woman and the youngest person to travel solo by kayak, rowing boat and bicycle around the world.

The Sunday morning breakfast event will close the literary aspect of the festival and will feature award-winning Irish Times journalist and author Rosita Boland with a presentation on her travel experiences as contained in her new book Elsewhere: One Woman, One Rucksack, One Lifetime of Travel.

The 2019 festival will conclude on Sunday afternoonwith a performance by local traditional music and dance group the Booley House in Lismore’s Millennium Park.

“The festival was big enough to have a critical mass of great audiences and engaging events without being too cumbersome or self-important. It struck the perfect balance.” – Tim Butcher.

“Our second day in Lismore, two sisters were treating us to a sumptuous lunch and then we were travelling by boat along the river, past beautiful houses sleeping by the water; soon thereafter, we were hearing harrowing stories of Arctic exploration and suffering from the deadpan Ranulph Fiennes, and meeting Elizabeth Morris, the wonderful wife of my prose hero since boyhood, Jan.” – Pico Iyer.

“The Immrama Festival of Travel Writing is the armchair traveller’s Superbowl, our Kumbh Mela, our Eucharistic Congress.” – Manchán Magan.