The youth of today are standing up to sexual harassment 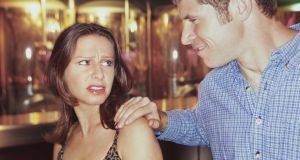 My son and his girlfriend came home from a club in town and told me that they had reported an incident of sexual harassment to the Garda. Photograph: Getty Images

Recently my son came home from a club in town with his girlfriend and told me that’d he’d reported an incident of sexual harassment to the Garda. A man had groped his girlfriend while she was on the dancefloor and the two of them had promptly headed off to the Garda station to make a statement.

I nodded sympathetically, while inside a part of me was saying, “aren’t you making a bit of a big deal about this?” In my day, the dark and gloomy 1980s, being groped was an occupational hazard, one of many, and we had a variety of unofficial ways of dealing with this – but it was simply a part of everyday life. At college or at work, the female bush telegraph would swing into operation, sharing information about teachers or employers who were a bit “handsy”, to quote actor Guy Pearce.

In 1989, I was living in Paris, and there was an unofficial campaign to reduce sexual harassment on crowded metro trains. If a man pinched your bum, you were to grab his hand, lift it high in the air and say, “Who owns this hand?” at the top of your voice.

There were two lessons for us women: first, sexual harassment was our responsibility and secondly, surviving it in its many forms, from wolf-whistling to unpleasant sexual encounters, was considered to be a skill: you wore your black belt in harassment deflection with pride.

But my son and his girlfriend’s actions helped me to understand that young people, male and female, see it in different terms. To them, sexual harassment is not just an unpleasant background noise in their lives, but part of a continuum, a space where some men can look and act towards women in whatever way they like and that this needs to be called out, named for exactly what it is, even if it is “only” a pat on the knee. Maybe that’s why the French law on street harassment resulted in 447 convictions in the few months after its enactment in late 2018.

But where does this leave me as a parent, I wondered? A couple of years ago, I had to shoo two grown men off the footpath outside my house when I realised that they were staring at my then 14-year-old daughter and her friends as they tottered out to my car to go to Wesley disco, dressed in a variety of tiny dresses. I was doing what any parent would do, and as far as I was concerned, the girls could have been naked – the staring was entirely the responsibility of these two goons.

But when I discussed it with a friend, a fellow mum of three girls, she looked at me aghast. For her, urging her daughters to dress “appropriately” was one of many tactics she employed to keep them safe, from urging them not to drink too much to insisting they always share a taxi. The world was not a safe place for women and by telling them that they should be armed at all times, she was simply being a responsible parent. If they were drunk, they would be vulnerable.

I was equally aghast – as far as I was concerned, it didn’t matter if my daughter was passed out on the ground – it didn’t give a young man any rights over her body. Then I realised that I was being naïve – yes, that’s the way I’d like the world to be, but it isn’t, even in 2019. That was why I’d confronted those two men, asking if they had nothing better to be doing than staring at young women. That is why, when walking with my daughter, I give the men who gawk at young women – and there are plenty – my best maternal death stare.

I now think that my son was absolutely right not to put up with behaviour that is simply the thin end of the wedge. Without this kind of change, things will remain the same for women like my daughter. But I can also relate to the double standards employed by my generation. I abhor the policing of women’s clothing, such as “forbidding” them to wear leggings on college campuses, in case people are offended; I’ve always gone out of my way to tell my daughter that she looks lovely, no matter what she’s wearing – and she does look lovely – but whilst that is nobody’s business but her own, I find myself tensing as she leaves the house, tottering up the road in her high heels, hoping she’ll return in exactly the same way she left.

It would seem that in many ways, the more things change, the more they are the same, which is why actions like those of my son and his girlfriend matter. Good for them.

The Start of Summer by Alison Walsh is published by Hachette Ireland in trade paperback, £13.99