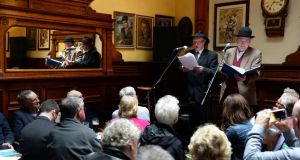 In a week when one famous Dublin Trinity felt the need to rebrand itself, the life of another was celebrated in a well-known city pub, with no talk of new logos or colour changes.

Mind you, the real-life Brian O’Nolan and his two main pseudonyms, Flann O’Brien and Myles na gCopaleen, had more corporate identity among them than most single writers manage.

So on the 48th anniversary of O’Nolan’s death yesterday, as members of his growing cult of fans gathered to commemorate the unholy and divided trinity, they had plenty of material with which to work.

As is now traditional, Myles Day centred on the Palace Bar on Fleet Street, one of many Dublin pubs with which the writer was intimate.

Specifically, it took place in the Palace’s back room: once an inner sanctum of Irish literature.

Yesterday’s readers and performers did their thing on a stage overlooked by a caricature of former Irish Times editor Bertie Smyllie, who once held court here nightly, surrounded by a cast of writers, including Patrick Kavanagh, Austin Clarke and Brinsley MacNamara.

It was Smyllie who hired O’Nolan as a columnist in 1940, partly to rescue the integrity of his letters page, which was under sustained assault from the multiple false personae the young writer had already developed.

As Myles na gCopaleen, his column was supposed to be exclusively in Irish. But he soon went bilingual in search of a larger readership. And as his fame grew, he dropped the Irish altogether.

At first unhappy at the loss of his hired Gaelgeoir, Smyllie (and his successors) benefited from what became, over the next quarter of a century, one of the funniest newspaper columns in the English language.

Inaugurated during O’Nolan’s centenary year, 2011, Myles Day was the brainchild of engineer John Clarke, who aimed to divert some of what he thought was the undue attention paid to James Joyce when it came to celebrating Irish writers.

Hence the event’s name, a deliberate twist on Bloomsday.

Despite this, Joyce somehow managed to muscle in on yesterday’s celebrations too.

But since his cameo was via Flann O’Brien’s The Dalkey Archive , in which the author of Ulysses is discovered to be still alive in the 1960s, working as a barman in Skerries, while disowning his “filthy” books and pursuing a late vocation with the Jesuits, the April Fool’s Day joke was on him.