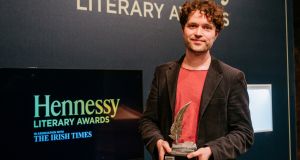 There was an appropriately international feel to this evening’s 48th (and final) Hennessy Literary Awards in Dublin’s Smock Alley, named as they are after one of Ireland’s most famous Wild Geese, Richard, founder of the cognac dynasty.

Colin Walsh, who was named the Hennessy New Irish Writer of the Year after earlier winning the Emerging Fiction category, lives in Belgium, while Audrey Molloy, winner of the Emerging Poetry category, is based in Australia. Mike McCormack, this year’s inductee into the Hennessy Literary Awards Hall of Fame, is teaching in Villanova University in the US. Only Eamonn Doggett, winner of the First Fiction category, is home-based.

The three category winners, chosen by authors Martina Evans, Eoin McNamee and New Irish Writing editor Ciaran Carty, each received €1,500 and a trophy while the overall winner received an extra €2,500.

Describing how he wrote his winning story Between the Waves, Galway writer Colin Walsh said: “My story started with images; embers coursing through night trees, ice cream on a lip. I was lathered in my bed with high fever and realized I should tell the story like a braid of glimpses.” Currently writing his first novel, in 2017 he won the Francis Mac Manus Short Story Award.

Audrey Molloy, who has been nominated for the Forward Prize, said of her winning poem At the Shell Midden: “It is the alchemy of poetry that I really enjoy – starting with nothing more than an emotion or thought and converting it into first an image, then raw words and finally a poem that I hope will resonate and linger in the reader’s mind.”

Eamon Doggett, from Bettystown, Co Meath, works as a digital sports reporter in Dublin and holds a Masters in Writing from NUI Galway. He said of his story Flipping Burgers: “My story was loosely based on a friend’s work experience and times I spent in a Burger King in Dublin. Fast food places have their own tics and customs, and aspirations seem to me to hang in the air; people swaying between dreams and their own destruction and the world’s.”

Elaine Cullen, market development manager of Moët Hennessy, said: “Hennessy has been a strong supporter of Irish culture for many years and the Hennessy Literary Awards is always a special evening where we get to honour some of Ireland’s best new writers. I congratulate Colin, Audrey and Eamon on their awards and the wonderful pieces of literature they created.”

Edward Dillon, distributors of Hennessy in Ireland, announced that it was stepping down as title sponsor of the New Irish Writing page and Hennessy Literary Awards has come to its end. Andy O’Hara, CEO of Edward Dillon, said: “Through working with Ciaran and the New Irish Writing page we have worked to showcase and support emerging literary talent in Ireland. It has been an excellent partnership and Hennessy is privileged to have been able to play a part in nurturing the careers of so many great Irish writers over the last 48 years. As the market evolves and Hennessy’s consumer audience changes, Hennessy continuously reviews its promotional activities, and after much consideration we have made the difficult decision that 2019 will be the final year of our sponsorship of New Irish Writing and the Hennessy Literary Awards. But we will continue the brand’s legacy in Ireland with artistic collaborations.”

Ciaran Carty said: “The Hennessy Literary Awards played a pivotal role in supporting the many great writers whose first work was published in the New Irish Writing Page, founded by David Marcus in 1968. They are recognised as one of the longest lasting literary sponsorships anywhere in the world and a model of how the cultural life of a country can be enhanced by inspired commercial engagement. It has been, for me, a deeply enriching experience in the more than 30 years I have been involved as editor of the page and curator of the awards.”

He expressed the hope that the New Irish Writing Page would secure the support of a new sponsor and continue to be published in The Irish Times.

Since 2003, the Hennessy Literary Awards has inducted one eminent nominee each year into the Hennessy Literary Awards Hall of Fame. This year’s inductee is Mike McCormack. In 1993 New Irish Writing published his first fiction, Thomas Crumlesh 1960-1992: A Retrospective, a surreal story about a body artist who kept self-harming at exhibitions until none of his body was left. Mike’s virtuoso third novel, Solar Bones, the story of a dead man returning to rural Mayo on All Souls’ Day, was voted novel of the year at the Irish Book Awards and won the International Dublin Literary Award of €100,000, the largest literary prize in the world for a single novel published in English.

The full shortlist of finalists for the Hennessy Literary Awards was:

Emerging Poetry
Anne Walsh Donnelly based in Mayo for Being in Love at Fifty
Audrey Molloy based in Australia for At the Shell Midden
Ilyana Kuhling based in Limerick for Fixed Vortex and Ingrained
James Finnegan based in Donegal for you can’t blame the water and what Rosalind Franklin (1920-1958) does not know is
Jennifer Matthews based in Cork for Monsters
Laura McKenna based in Cork for Mum, Jasper in the Morning and Brent
Siobhan Mac Mahon based in Dublin for Ars Poetica and Ultrasound