What makes the West such a distinctive part of the Irish ‘soulscape’? 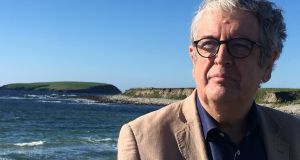 In 2018 the Connemara-based artist Pádraic Reaney and I collaborated on a project which brought together some of Pádraic’s images drawn from his long fascination with a deserted island, Inishark, and poems of my own which had been written over five decades, inspired in one way or another by the life and landscapes of the west of Ireland.

The project included an exhibition of Pádraic’s paintings, which we took to various parts of the west, including Galway, Westport and Achill, and a book, Crossing the Sound: Poems and Images from the west of Ireland, with an introduction by the novelist, Hugo Hamilton. The book, in a limited edition, sold out and the proceeds were presented by my wife, Dorothea Melvin, a cancer survivor, to the Mayo Pink Ribbon Cancer Care organisation in Kenny’s Bookshop and Art Gallery. It seemed the fitting place to conclude a personal journey going back to the mid-1970s.

Meeting and talking with friends and colleagues from Galway brought back much of the surprise and thrill of first encountering the western landscapes and lifestyle of those early days. I started to mull over what made, or makes, “the west”, such a distinctive part of the “soulscape” of the Irish countryside.

Questions started to emerge: what is “the west” in the first place? Does such a place actually exist or is it a notion we have taken at face value, influenced so heavily by tourist routes of the 19th and 20th centuries, with the powerful imagery of Paul Henry’s Connemara uppermost in one’s mind?

How have things changed since I first went to live there as a young man and started to write out of Galway and Mayo, such contrasting ways of life and living to those I had known in the Belfast of my own upbringing in the 1950s and ’60s.

And so, in conversation with independent radio producer Claire Cunningham, we came up with the idea of probing these questions about place and landscape through a series of conversations with some of those who live in the west and who have witnessed as writers and artists, curators and activists the developments of the region in the last 40 years or so.

Looking back, for instance, with the journalist Judy Murphy of the Connacht Tribune, at the achievements of the Galway arts scene in spite of the continuing lack of substantial civic investment in infrastructure and the diverse communities which are now such a crucial feature of present-day Galway life; discussing with Tom Kenny, the hugely influential role his mother and father made in establishing the Kenny Bookshop and Arts Gallery in post-Emergency Ireland; exploring the meaning of what it means to be considered a Connemara artist with Pádraic Reaney; and sitting with artist John McHugh in the wonderful Böll Residence on Achill Island, recalling how the island has always drawn visual artists and writers and continues to provide a haven: the narrative of Crossing the Sound wrote itself.

In a conversation with poet Seán Lysaght, nestled in his Mayo home overlooking the Nephin mountain range, it became clear that there isn’t, of course, an all-embracing “west of Ireland”, but many variations and traditions, as Seán identified, both in historical context, in regional cultural and language difference, and in the physical landscape and ecology of which he has written so powerfully in both prose and poetry.

We recorded some poems of my own along that journey, some in the very places out of which they emerged including St Nicholas’s Church, Market Street, Bowling Green, O’Brien’s Bridge in Galway and on Achill. Cathy Belton, one of the city’s stars, describes “the Tom Murphy years” of Druid Theatre as her own inspiration to becoming an actor and gives a deeply moving reading of an extract from Talking of Dreams, a short dramatic piece I had written to celebrate the imaginary life and times of a 21st-century Molly Bloom, the inspirational figure of Ulysses.

Galway didn’t relent when it came to rain during those days earlier this year when we padded the streets recording. By the time we hit the road for Mayo, the weather changed. Sun came out as we entered Westport, wonderful, busy, Westport. But how could one ever forget the trip into Achill itself: was this a summer’s day. A pet day, or what?

In the garden at the Bervie guest house, a national treasure, the Atlantic was in welcoming mode and the sky over our heads shone for dear light. You couldn’t make it up. The following day we went in pursuit of bird song, the ambience of natural sound, and in the background the noise of everyday commercial life quietened and settled among the hills and untouched bogland. Solitude is what this landscape offers and the silence to think:

You deal in barren landscapes
of an ice born Atlantic
where the trees are all bent
and scattered birds reel.

That is your own place,
going back as if something,
an heirloom or memory had
been lost or misplaced.

Crossing the Sound, produced by Claire Cunningham (Rockfinch Ltd), was made with the support of the Broadcasting Association of Ireland Sound and Vision Funding Scheme and will be broadcast on RTÉ lyric fm on Sunday, December 22nd at 6pm.