My publishers didn’t baulk at its domesticity, that it is about a middle-aged engineer, the lack of punctuation and the way the whole thing unfurls as one unbroken sentence 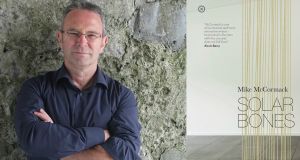 Mike McCormack: “a book which always seemed to me to be about the various shades of masculinity – son, brother, husband, father, engineer – found its most receptive and courageous readers amongst women”. Photograph: Sarah Davis-Goff

I have no memories of writing Solar Bones. Yes, there is a bale of handwritten notes in the corner of my study and a heap of word documents on the computer which get progressively cleaner and closer to the book it is today, but nowhere in my mind is there any memory of that extended slogging effort which is the essential experience of writing a novel. I have clear memories of writing all my previous novels and all the separate stories of my two collections. But Solar Bones – no memories whatsoever, none at all.

My email account shows that I struck the send button around half two in the morning and winged the manuscript off to my agent Marianne Gunn O’Connor. Six hours later, I got into the car with my wife Maeve to drive to the hospital and I became a father around half ten that same morning. Everything before my son’s birth was changed irrevocably and some things, it would appear, were obliterated completely.

Months later I sat in one of Galway’s best eating places, Kai Café on Sea Road, and listened to Sarah-Davis Goff and Lisa Coen, the two – nay, the only – people who make up the publishing house, Tramp Press. They were talking about the manuscript of Solar Bones, and after listening to them for 10 minutes I knew that my novel had found its proper home. They loved the book and they were excited at the possibility of publishing it. They spoke of the ideas and the technique, they spoke of the voice and the title. When they finished, I remained silent for a long time to let a wave of relief and gratitude wash through me. Later that evening I phoned Marianne to tell her, “They got it, they really understood it”. They didn’t baulk at any aspect of it nor were they spooked by it. All its domesticity, the fact that it is about a middle-aged engineer, the lack of punctuation and the way the whole thing unfurls as one unbroken sentence. No, none of these things fazed them. Every difficulty was an opportunity, every obstacle something they could run with and make a commercial and artistic virtue of.

In the following months, during the most rewarding editorial process any of my books has come through, I would often reflect that my novel was the beneficiary of women’s courage. From my wife’s first reading of an early draft which assured me I was indeed on the right track, to the enthusiastic response of Marianne, to the impassioned pitch Sarah and Lisa had made for it. At every important moment in the book’s journey, men had faltered but women had stayed firm. and a book which always seemed to me to be about the various shades of masculinity – son, brother, husband, father, engineer – found its most receptive and courageous readers amongst women. Tramp Press picked up on Marianne’s faith in the novel and crucially her conviction that readers would welcome such a book, something so angular, something that presented a different challenge. This shared faith was one of the strengths of the whole project, that and the swiftness and adaptability of a small independent publisher.

Other talents gathered to the book. My copy of Solar Bones is a couple of months old now but I have not yet tired of taking it up and turning it over in my hands to admire it. The cover image and the way it captures the idea of an absent presence; the flow of the type down to the final blank half-page at the end … It’s the most beautifully produced of all my books, a true object of desire, the work of a wonderful designer, Fiachra McCarthy, and typesetter, Marsha Swan, who were inspired to give of their best; I am grateful to them.

The Tramp Press logo – an X inscribed in a circle – is in the top left-hand corner of the book and on the spine. Sarah explained that it comes from the symbology of Depression-era tramps and hobos who developed a visual shorthand to aid their fellow travellers – one sign for “No one at home”, another for “Angry man with dog within”. The X within the circle said, “Here is a good place to stay. You will be looked after here.” And yes, that’s been my experience. Another instance of the attention given to small details.

So it’s done now, published and on the shelves. The critics have their say and whatever happens from here on is in the lap of the gods. All I know is that I sleep confident that everyone involved has given it their best shot so that it can have every chance. And, that is something I will remember.

Over the course of October The Irish Times will publish an essay on editing the work by his publishers at Tramp Press, and essays by fellow writers Sara Baume, Colin Barrett, Mia Gallagher and John Kelly, broadcaster Rick O’Shea and academic Sharae Deckard. The series will culminate with a live interview with Martin Doyle, assistant literary editor of The Irish Times, in the Irish Writers Centre, Parnell Sqaure, Dublin, on Thuraday, October 20th, at 7.30pm, which will be published as a podcast on October 31st. Solar Bones is published by Tramp Press, and is available online and in all good bookshops for €15.