Armenians, Turks and a century of genocide: a village where a serial killer is hailed as a hero

Vicken Cheterian, author of Open Wounds, on the terrible legacy for the entire region of the Armenian genocide and its denial 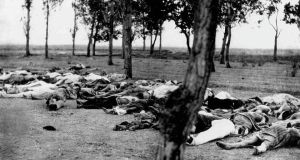 Armenians killed by Turks during the Armenian genocide in 1915. A world that has failed to bring justice for a genocide committed 100 years ago is a world that lacks the courage or the moral righteousness to address the wrongdoings of our own times. Photograph: Universal History Archive/UIG via Getty images 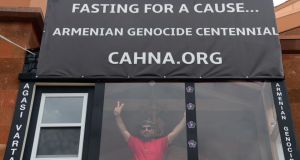 Agasi Vartanyan gestures from inside a glass enclosure built at the St Leon Armenian Cathedral in Burbank, California on April 22nd, 2015, where he is in the midst of a 55-day fast, surviving only on water, in memory of the victims of the 1915 Armenian genocide. Photograph: Frederic J Brown/AFP/Getty Images 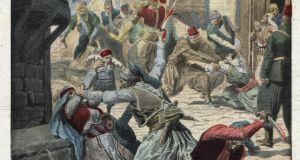 The destruction of the Armenian population by Ottoman Turks, in an illustration from the French newspaper Le Petit Journal, December 12th, 1915. Photograph: Leemage/UIG via Getty Images

What happens when there is a serial killer in a village, but instead of arresting him the police uses his services from time to time, the judge calls him a “hero”, and the schoolteacher tells the children to follow his example? What happens to the families of the victims in this village, and how does the crime change the behaviour of its inhabitants?

Four years ago I started researching my new book Open Wounds, where I asked the question: what were the consequences of the century-long denial of the Armenian genocide? At the time I was conscious of the negative consequences of denialism on the descendants of the survivors, Armenians as well as Greeks and Assyrians, Christian nations that were part of the tissue of the Ottoman society, and suddenly their state wanted to eliminate them. What I was to discover was how much the denial of the genocide had changed our world, polluted our political culture.

The Armenian genocide started a hundred years ago, on April 24th, 1915, with the Turkish police arresting 260 Armenian intellectuals in Istanbul: teachers, parliamentarians, poets, musicians, the intellectual class of the Armenians, to be deported and tortured to death. An entire nation was then uprooted, thrown to the Syrian desert in death marches, to die of thirst, or be killed by the swords of the Turkish soldiers. At the start of the first World War a little over 2 million Armenians lived in the Ottoman Empire; at the end of the war there were only 300,000 remaining in Turkey, half of them orphans or women in captivity.

We know when the Armenian genocide started, but unlike the first World War or the Holocaust we do not have a date when the Armenian genocide terminates. Turkey, the state responsible for the crime, has denied that it had done anything wrong. This denial of the crime made mass murder normal and acceptable in our times. It has poisoned the life not only of the survivors, but also of the perpetrators.

Denial of the crime permitted the continuation of repression of religious minorities in Turkey. After the end of the war Armenian survivors of the death marches returned to their homes, only to be massacred and deported a second time by Kemalist forces. The properties confiscated from the Armenians, including over 2,500 churches, were not given back to their rightful owners, until today. In 1914, before the first World War, Istanbul had a population comprised mostly of Christians, mainly Greeks and Armenians. Istanbul was the only place where mass killings did not take place against Armenians, Assyrians and Greeks. Yet, the Turkish government through discriminatory policies and by confiscating their property tried to suffocate them economically. When this was not enough outright pogroms were organised as during the September 1955 massacre that targeted Greek, Armenian and other minorities. Today, there are only 50,000 or so Armenians, and only 2,000 Greeks left there.

But what I was surprised to discover during my research is how the denial of the Armenian genocide had shaped the political culture of both the perpetrator of the crime, and the bystander. All societies have minorities; and concepts such as minority or majority are social constructs that change with time. At the exact time Armenians were exterminated, Turkey created a new minority – the Kurds. And the Turkish state gave them a similar treatment: first, their identity was denied. There were no “Kurds” in the Kemalist Republic, they were “mountain Turks” who spoke a corrupted Turkish, and were forced to speak the “proper” language. Those who opposed were imprisoned, became the target of state violence. When Kurds revolted the state massacred and deported the civilian population. This is what happened in Dersim in 1937-38; and this is what happened when the PKK rebellion started in 1984.

Denial of the crime has equally consequences on Turkish political culture. Denial of the Armenian genocide deformed Turkish culture, making freedom of expression impossible. It is not possible to maintain such a lie without coercion. Is it a surprise, then, that Turkey has one of the highest rates of journalists in prison?

Turkish denial of genocide could not have been sustained without international indifference, or even co-operation. When the Pope in a Mass in the Vatican on April 12th clearly talked about genocide of the Armenians, it made world news. But the real news is why the world has continued to ignore this founding crime of the 20th century? US President Barak Obama as a candidate in 2008 promised recognition of the genocide but once president of the most powerful state he refrained from doing so. Germany, an ally of Turkey and partner in the crime, has recognised that Armenians suffered genocide only a century after the fact. Israel, a country that was the outcome of another horrendous genocide, continues to reject that there was an Armenian genocide for the sake of its long-term alliance with the Turkish military. Not only was Turkey not condemned for its crime, but it was admired for its success: for decades Western states presented Nato member Turkey to Muslim developing societies as a “model” to be followed. Turkey was hailed as a champion of modernity and “secularism”, when it continued the policies of repression of its religious minorities. If the model is a criminal state, what could one expect from those following it?

This active collaboration of the world political class in covering up the crime is the last stage of the genocide itself. The international political class, with its selfish narrow interests, has failed not only the Armenian victims, but all of humanity: today we know the organic continuity between the Armenian genocide and the Holocaust organised by Nazi Germany, who took the Turkish “solution” as their model. Are we surprised by the culture of violence in Syria or Iraq? These states emerged from the ruins of the Ottoman Empire, where Ottoman army officers played a key role in the new state institutions, an Ottoman army that had carried out the violent destruction of its own civilians. They had their own “modernist” and “secular” regimes that had no respect to their own citizens. In the Middle East no one remembers the 1915 genocide, no one named it a crime. But if we do not stop a crime, it does not disappear but continues.

The Armenian genocide is the first modern genocide, when a modern state with its destructive power out of ideological radicalisation identified part of its own civilians as undesirable. A state, instead of protecting its citizens, deported them to the desert, stole their belongings, kidnapped their children. Now, after 100 years, our global political institutions still cannot call this crime by its name. For 100 years we lived in that village where the serial killer was acclaimed as role model. A world that has failed to bring justice for a genocide committed 100 years ago is a world that lacks the courage or the moral righteousness to address the wrongdoings of our own times. As long as the denial of the Armenian genocide continues, as long as justice is not done, we will never be able to say “Never Again!”

Vicken Cheterian’s book Open Wounds: Armenians, Turks and a Century of Genocide was published by Hurst in the UK in April and will be published by Oxford University Press in the US in August

The Invisible Man review: Tenser than Christmas at the in-laws
3