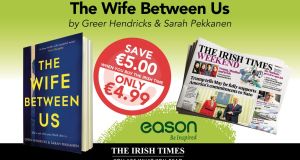 In Saturday’s Irish Times, crime author Anthony J Quinn writes about finding refuge in books while growing up near the Border, while Lucy McDiarmid argues that the story of Robert Brennan’s memoir Allegiance is that of the State’s birth. Our reviews include John Boyne on How To Be Invisible by Kate Bush; Andrew Gallix on The End of the End of the Earth by Jonathan Franzen; Chris Kissane on The Maamtrasna Murders: Language, Life and Death in Nineteenth-Century Ireland by Margaret Kelleher; Julie Parsons on The Dark by John McGahern; Seán Hewitt on Republic of Elsewhere by Ciaran Carty; Anna Carey on The Mere Wife by Maria Dahvana Headley; Paschal Donohoe on Future Politics by Jamie Susskind; JP O’Malley on The Life of Saul Bellow; Declan Burke on In the Dark River by Conor Brady; Mihir Bose on a new biography of Gandhi; Sarah Gilmartin on Friday Black by Nana Kwame Adjei-Brenyah; and Sara Keating on the best new children’s books.

You can also buy The Wife Between Us for just €4.99, a saving of €5, when you buy The Irish Times in any branch of Eason this weekend.