The impact of the Troubles on the Republic of Ireland, 1968-79. Boiling Volcano?: review 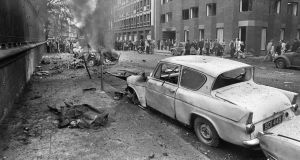 One of the 26 killed by the Dublin bombings in May 1974 lies covered on the path on South Leinster Street (Nassau Street) on Dublin while the bombed car smoulders in the background. Photograph: Tom Lawlor

Book Title:
The impact of the Troubles on the Republic of Ireland, 1968-79. Boiling Volcano?

The Republic of Ireland largely ignored Northern Ireland during the 1960s, notwithstanding the Lemass-O’Neill talks mid-decade. That was until October 1968 when scenes of RUC men breaking the heads of civil rights demonstrators in Derry brought the North rudely to the Republic’s attention. Sympathy for northern Catholics was broad but also limited, however. The North was not a factor at the 1969 general election in June but, within two months, loyalist pogroms saw thousands of Catholic families flee their homes, many being given refugee in the South. British troops arrived in the North, ostensibly to protect Catholics. From that point, the Troubles not only became an issue in the Republic, but came to dominate it, at times at least, and influenced every facet of life. The South was spared the worst of the violence that consumed the North during these years, but it was not untouched and many still bear the scars.

Brian Hanley has written a valuable study of how the first 10 years of the Troubles affected the Republic. Using private and official papers from a broad spectrum of sources along with local and lesser used national newspapers and periodicals, from the Church of Ireland Gazette to the Sunday World, he has compiled a wide-ranging examination of many areas including the Fianna Fáil and coalition governments, smaller radical groups or micro-parties, some with influence that exceeded their membership, as well as trade unions, sport, the media and popular culture. In it we hear voices from across Irish society, from all shades of class, religion and political opinion.

The book is divided into thematic chapters which examine issues such as violence in the South, State security, attitudes towards northern nationalists, including the experience of Catholic refugees in the South, historical revisionism and the impact of the conflict on southern Protestants. Hanley also charts the ebb and flow of government and popular opinion through opinion polls, columnists and the insights of politicians and diplomats. The Brits, if nothing else, knew how to write lucid dispatches. In particular, ambassador John Peck’s reports show his keen judgment as well as the propensity of certain government ministers to speak candidly to him.

More than once, the British embassy at Merrion Square became a target after violence in the North, and was destroyed after Bloody Sunday as crowds vented their anger at the killing of 13 unarmed protesters in Derry in January 1972. However, Hanley notes, shocking as Bloody Sunday undeniably was, subsequent incidents with greater loss of life elicited nothing like the reaction. In 1974, more than twice as many people, 33 including one pregnant woman, died in one day in the Dublin and Monaghan bombings, for instance. Though it was the conflict’s deadliest attack, there was no day of mourning for them and on its anniversary, The Irish Times could reflect that “many people seem to have forgotten the bombings even took place”.

This amnesia seems to have been largely a reaction to the escalation in republican violence since Bloody Sunday, including the Official IRA bombing in Aldershot which killed seven and injured 19, and Bloody Friday in which Provisional IRA bombs killed nine and injured 130. Attacks such as these caused many to recoil, but Hanley notes that the Fine Gael-Labour national coalition government, which came to office in March 1973, set the tone by blaming the two IRAs for provoking the loyalists, with the British ambassador observing how “indignation is directed more against the IRA than the Protestant extremists”.

Despite killing nearly 50 people in the South during the 1970s, and injuring hundreds, loyalist paramilitaries were “never regarded as an existential threat to the State in the way republicans were”. While the perception of the greater danger to the State changed from the Official IRA to the Provisionals during the mid-1970s, as a consequence, security measures and legislation, including censorship, the Special Criminal Courts and heavy-handed policing, were geared towards republicans. Among some Fine Gael candidates, there was a perception that the party’s stance on security had damaged them during the 1977 election, which the coalition lost. But if popular opinion felt the government’s attitude was “inhuman”, that did not extend to support for the campaign by either IRA. Furthermore, while many recoiled from the bombing campaign in Britain in its own right, they also feared its impact on the Irish in Britain, where almost 710,000 Irish-born lived. By early 1975, the British ambassador could report a decline in sympathy for republicanism in the South, pointing to the Birmingham bombings, and the fear of a backlash, as the single greatest factor.

Popular republicanism remained a force to be reckoned with, however, even if it was more along the lines of barstool nationalists or “sneaking regarders” who helped the Wolfe Tones become the Republic’s second-best-selling recording artist, a feat it achieved with no national radio play, RTÉ radio having placed an unofficial ban on “rebel” songs in 1971. The best-selling act was Abba. Around the same time, an Economic and Social Research Institute study found that “opposition to IRA activities is not overwhelming and certainly does not match the opposition so often articulated by public figures”. The report was widely condemned as highly irresponsible, but what is most surprising is that it was ever published at all.

Hanley is a scholarly authority on republicanism whose work includes an acclaimed history of the official republican movement, Lost Revolution, co-written by Scott Millar. The book is not a primer and assumes a very good familiarity with the Irish politics of the period but it is a study of a complex issue that defies trite analysis or divisions made all the more so by virtue of the fact that, as Hanley notes, “people could and did hold very contrasting views about the North”.