How the parents of Ireland’s authors survived their past 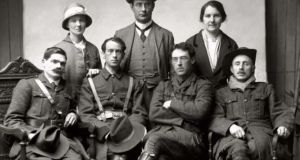 On an evening about 98 years ago, the parents and grandparents of some of my favourite writers were pretending not to notice the Black and Tans.

Robert and Una Brennan were playing cards with Tommy and Geraldine Dillon in the sitting room of a house on Rathgar Avenue when they heard a military lorry stop outside.

Una saw a face looking through the window; the two couples did not panic but kept on playing though, as Brennan wrote in his memoir, Allegiance; “None of us knew what cards we were playing.” After fifteen minutes, the lorry drove away.

“Had any of us shown any signs of panic,” Brennan continued, “the raiders would have entered”.

So there they sat, not knowing the great writers their marriages would produce: they were the parents of Maeve Brennan (four years old at the time), the parents of Eilís Dillon (then a baby), and the grandparents of Eiléan Ní Chuilleanáin (born 22 years later), writers whose lives might have been different had the Brennans and the Dillons panicked and the house been raided.

Angela Bourke’s biography Maeve Brennan: Homesick at The New Yorker (2004) inspired a renewal of interest in the life and work of that short-story writer. Reversing contemporary fashion, I’d like to look at the wonderful male writer behind his more famous daughter.

Robert Brennan (1881 - 1964) was the author of crime fiction, a play, and two memoirs; the first, Allegiance (1950), remains one of my favourite books, not because I take Brennan’s side in every political dispute but because his writing is good.

It was Brennan who woke up, asked a passerby where the jail was, and roused the soldiers from their slumber

Allegiance follows Brennan’s career through his youthful work for the Wexford Surveyor’s Office and the Enniscorthy Echo to his public life as Quartermaster of the Wexford Brigade of the Volunteers, chief of the Sinn Féin publicity bureau, director of elections in 1918, under-secretary for foreign affairs, and director of publicity for the Republicans during the civil war.

His term as Ireland’s first minister to the US is covered in a second memoir.

Una Brennan, to whom Allegiance is dedicated, was a member of Cumann na mBan and active in the Rising while pregnant with the future New Yorker writer Maeve. As her granddaughter Yvonne Jerrold notes, she was one of three women who raised the Irish tricolour over the Athenaeum in Enniscorthy, which was occupied by the Volunteers.

A reader of Allegiance might be persuaded that the periods Brennan spent behind bars – in Mountjoy, Kilmainham, Waterford, Cork, Arbour Hill, Dartmoor, Lewes, Parkhurst, Gloucester – constituted his proudest achievement. Readers can to some extent laugh their way through Brennan’s stays in prison.

When Brennan was taken from Dublin to Gloucester Jail, he and his military escorts were so exhausted that they got lost in the town and fell asleep on the canal bank.

It was Brennan who woke up, asked a passerby where the jail was, and roused the soldiers from their slumber. When they reached the prison, the guard refused to open the door because; “We don’t open the prison on Sunday till seven.”

Brennan was furious: “ ‘Well, that’s the limit,’ I said in a rage.” As they waited for the seven o’clock opening in a police station to which Brennan led them, Brennan guessed the exact town in Offaly responsible for the sergeant’s accent, and, “My sergeant was plainly affected when we said goodbye.”

The jolliest times in prison occurred when Harry Boland was Brennan’s fellow inmate. In Lewes, Boland and Brennan joined forces to torture a warder named Hawke who failed to give Boland his allotted pint of porridge. The warder dropped the tin in the bucket and spilled porridge all over his clothes: “His language was unprintable,” writes Brennan.

“And for nothing,” I said. “I’ve never before heard it disputed that every man is entitled to a pint of porridge.”

“But I’m only saying,” I said, “that every man is entitled to a pint of porridge.”

Hawke applied for a transfer and was never seen again at Lewes. But his memory lived on: “Years later, when I was Under-Secretary for Foreign Affairs and Harry was the Irish Envoy to the United States, he used to send me long official reports. At the end of every one of them, in his own handwriting, were the words: ‘Every man is entitled to a pint of porridge.’ ”

Even raids by the Black and Tans could be occasions of wit. Once Brennan and Liam Mellowes were lying side by side in a house, hiding as the Crossley lorries went by. When the lorries had passed, Mellowes whispered, “When I hear any lorry, I lay me doon and dee.”

De Valera appears occasionally as a figure of comedy. When Brennan was writing publicity for Sinn Féin, Una Brennan visited his office and sat on the table where he was working. Dev entered and told her she “shouldn’t be coming in here”.

“Do you know Mr. Brennan is a married man?”

“Well, she said, ‘I ought to,’ and she explained the situation.

The story had a long life: Dev “ever afterwards,” when he met Una, “recalled the incident with glee”.

The typescript of Allegiance exists in Brennan’s witness statement in the Bureau of Military History, and one revealing conversation is crossed out but still legible. A priest who visited Brennan in Mountjoy after the Rising “discoursed airily on the futility of our fight” but then sensed Brennan’s anger.

Ironic to some extent, the response also shows Brennan protecting himself from the unbearable emotions of the time. Brennan did have feelings: he had spent the night after Sean MacDermott’s court-martial lying next to him on the floor of Richmond Barracks, discussing the Rising and both men’s readiness for death.

He had been housed in one of the condemned cells in Kilmainham, and, as he wrote his mother, he “heard the volley which killed Sean MacDermott.” Brennan was given a death sentence, and then, minutes later, told that his sentence was commuted to five years’ penal servitude: “I felt as a man would who, having been relieved of an immense burden, had had it placed on his shoulders again.”

Brennan did not, then, altogether laugh his way through the Rising, the War of Independence, and the Civil War. In the winter of 1921 he had a breakdown, and, “When the truce came, instead of getting better, I got worse.”

Following a doctor’s advice, Brennan spent a night drinking in Paris and felt “a new man” the next day. The pervasive jokiness of the book is in part a response to reliving the strain of those difficult times: it was easier to tell the funny stories than the tragic ones.

Brennan’s affection for Harry Boland, Erskine Childers, and Liam Mellowes appears every time they feature in the text, but he never mentions their deaths.

The puns, the practical jokes and the hilarity that break through even the tensest moments in Allegiance make it a delight to read

He lent money to his close friend, Arthur Griffith, even after their positions on the Treaty divided them, and Griffith wrote back returning the money “with a note of apology for the delay.”

When Free State soldiers raided Brennan’s house, they found Griffith’s note and, assuming they had come to the wrong place, departed.

The memoir stops abruptly when Brennan is asked to direct publicity for the Republican forces: “I agreed to do so and I went underground.”

The puns, the practical jokes and the hilarity that break through even the tensest moments in Allegiance make it a delight to read, and the rarity of direct emotional expressiveness gives the moments of feeling a particular power. Allegiance belongs in the canon of Irish memoirs.

Lucy McDiarmid’s most recent monographs are At Home in the Revolution: What Women Said and Did in 1916 and Poets and The Peacock Dinner: the Literary History of a Meal