A reader offer, tomorrow’s books pages, an Oscar Wilde competition and much more 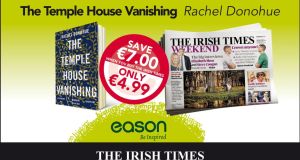 The Temple House Vanishing by Rachel Donohue is this weekend’s Irish Times book offer at Eason. When you buy tomorrow’s paper, you can also purchsse the acclaimed debut thriller for only €4.99, a saving of €7. To whet your appetitte, here is our review and Rachel’s essay on being a teenage girl in Ireland in the early 1990s.

The shortlist for the £50,000 Baillie Gifford Prize for Non-Fiction, has been announced: One Two Three Four: The Beatles in Time by Craig Brown; The Idea of the Brain: A History by Matthew Cobb; Black Spartacus: The Epic Life of Toussaint Louverture by Sudhir Hazareesingh; Our Bodies, Their Battlefield: What War Does to Women by Christina Lamb; Stranger in the Shogun’s City: A Woman’s Life in Nineteenth-Century Japan by Amy Stanley; and The Haunting of Alma Fielding: A True Ghost Story by Kate Summerscale. The winner will be announced on November 24th.

Wonderfest, in association with Pavilion Theatre, Dún Laoghaire, is a new digital book festival for schools and families. It will take place from November 20th to 22nd, with 28 different events featuring more than 60 Irish children’s writers and illustrators, including Eoin Colfer, Oliver Jeffers, Laureate na nÓg Áine Ní Ghlinn, Derek Landy, Mary Murphy, Chris Judge, Paul Howard & Gordon D’Arcy and Judi Curtin. All events are live, with plenty of opportunity for interaction with the writers and illustrators. Tickets will go on sale from November 2nd on the Pavilion Theatre website. For more information see wonderfest.ie

Sandycove is to publish The Dark Age, an essay collection by Elizabeth Boyle. Patricia Deevy, its deputy publisher, bought rights from agent Robert Caskie ahead of the Frankfurt bookfair. Boyle’s prose debut is a hybrid of memoir and literary reconnaissance. She travels through a year of our pandemic times – also the year she turns 40 – and addresses the big questions: grief, familial devotion and estrangement, romantic love, ageing, addiction, identity, faith, curiosity, nature, writing and thinking, memory and forgetting.

Boyle said: “My work as a medieval historian has often given me a deep-past perspective on my own life experiences. The sources that I study from medieval Ireland and Britain deal - sometimes in surprising ways - with themes that intersect with my lived reality: family breakdown, grief, addiction, education, sex and travel. The events of 2020 provide a particularly acute lens through which to view these various strands, so I hope to interweave recent and distant pasts in ways that can offer insights, consolation, and hope for the future.”

To celebrate Oscar Wilde’s 166th birthday today, the Oscar Wilde Society in conjunction with The Oldie are launching a Wilde Wit Competition. The challenge is to write a quote or quip that sounds like something Oscar Wilde could have said.

“Oscar Wilde may be the wittiest person who ever lived,” said author and broadcaster Gyles Brandreth, honorary president of the society. “We have been feasting on his bon mots for more than 100 years. Now the Wilde Wit Competition gives you a chance to put words in Oscar’s mouth.”

The rules are simple: Submit your entries by November 30th here.