Book argues caste, not race, divides the US, linking the issue to Nazi Germany and India 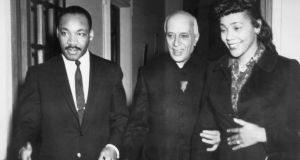 Indian prime minister Jawaharlal Nehru is flanked by his guests, US civil rights leader Dr Martin Luther King and his wife Coretta Scott King during their one-month visit to India at the invitation of the Gandhi Peace Foundation in 1959. Photograph: Getty Images

Book Title:
Caste: The Lies that Divide Us

In the winter of 1959 Martin Luther King went to India. It was for him a pilgrimage, as Gandhi’s non-violent campaign to free India from British rule had inspired him. But when he visited a school in the southern state of Kerala he was “a bit shocked and peeved” that the principal of a school introduced him as “a fellow untouchable from the United States of America”, untouchables being the caste the Hindus had for centuries oppressed so cruelly. Then, thinking about life in America, he accepted that, “yes, I am an untouchable, and every Negro in the United States of America is an untouchable”.

This is the thesis of Wilkerson’s book: that the problem in America is not race but caste, no different to India’s age-old caste problem or that of Nazi Germany. “Caste is the bones, race is the skin. Race is what we can see, the physical traits that have been given arbitrary meaning and shorthand for who a person is. Caste is the powerful infrastructure that holds each group in its place. Caste is fixed and rigid. Race is fluid and superficial, subject to periodic redefinition to meet the needs of the dominant caste in what is now the United States.”

The idea that the American problem is really a caste one is not new, but no one has linked it with Nazi Germany and India as Wilkerson has.

She has a chilling description of a meeting on June 5th, 1934, when Nazi officials met in Berlin to frame the Nuremberg Laws which was used to brand the Jews as subhuman and pave the way for the Holocaust. American racists inspired the Nazis. Hitler considered The Passing of the Great Race by Madison Grant, a leading eugenicist from New York, as “my Bible”. Nazi lawmakers borrowed from US race legislation but felt Americans had gone overboard.

American laws banned intermarriage between whites and blacks. Alabama only removed this legislation in 2000, and held that an American man or woman who had even “one drop of Negro blood in their veins counted as blacks”. The Nazis, while considering intermarriage between Jews and Germans as “racial treason”, thought the American definition too harsh.

It is amazing to think that Barack Obama under Nazi blood laws could have passed as German but not in America where he would always be classified as black.

However, Wilkerson ignores the fact that Nazis drew on centuries of European anti-Semitism which dated back to the dawn of Christianity and led to many European Jews fleeing to America.

She also simplifies the very complex Indian caste system. There can be no question Hinduism’s treatment of the so-called lower castes, now known as the Dalits, is its original sin which has caused untold misery to millions of Indians over many centuries. Wilkerson is right that caste puts people in containers but while caste imprisons individuals, caste containers can move.

The gotra – literally a cow pen – is a lineage group, a clan, like the gens of ancient Rome

My caste, Kayasthas, often described as the second most important caste after the Brahmins, actually started as a lowly caste and made its way up. And, far from being warriors as they are often described, my ancestors were clerks – good at recording things. And although Brahmins, who have run the sort of closed shop that not even Margaret Thatcher could have broken, were higher than us, my parents employed a Brahmin cook. He would immediately get up from the chair or stool he was sitting on when my father entered the room. He was acknowledging our superior economic power. As Wilkerson’s many examples show, such deference by a white for an African-American would be unthinkable.

And Wilkerson does not mention that caste, while the bedrock of Hindu society, plays no role in a Hindu religious service. In all the years I saw my mother praying, the Brahmin priest – and only a Brahmin can be a Hindu priest – never asked her what caste she was. His only question was, “What is your gotra?”

This, as the historian Abraham Eraly has pointed out, is “a further complication in Indian society”. The gotra – literally a cow pen – is a lineage group, a clan, like the gens of ancient Rome. Such groups had presumably existed in Indo-European society from very early times, long before the formation of castes, and were no doubt once common among all sections of society.

Brahmins can have the same gotra as Kayasthas and other Hindu castes and, of course, Kayasthas can belong to different gotras. So, while we are Gautam gotra, the husband of my youngest sister, who is a Kayastha, is from the Kashyap gotra, Gautam and Kashyap being two ancient munnis, religious leaders, whose devotees our ancestors presumably were.

Wilkerson’s book is full of heartrending stories of the oppression suffered by African-Americans, and her description of her own experiences of discrimination is very evocative, but her attempts to link America with Nazi Germany and India does not quite work and is at times simplistic.

Mihir Bose is a former BBC sports editor. His study of sports and apartheid, Sporting Colours, was runner-up in the 1994 William Hill Sports Book of the Year award.