A glimpse of what he could be 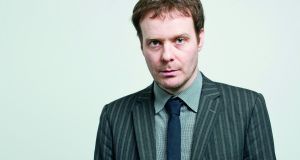 Tom McCarthy is not immune to contemporary literature, or oblivious to the ways the recent past presses on the present. Photograph: Nicole Strasser

Tom McCarthy lives in a 12th-storey flat in central London, and watches metropolitan weather like it’s 24-hour news, or a vast screensaver. On the phone to friends, he can warn that vertical walls of rain are approaching Islington or Dalston, and predict broad shafts of sunlight soon to strafe the West End. The first piece in the novelist’s new essay collection is called Meteomedia, or Why London’s Weather Is in the Middle of Everything, and it makes compelling connections between the meteorology of the Great Wen and the flood of information through its concrete and electronic conduits. The “religious heart” of London, McCarthy writes, is the British Telecom tower in Fitzrovia, built in the white heat of the 1960s and still relaying “signs and tokens” to the city below.

McCarthy’s fiction is always alert to advancing fronts of innovation and information; in Typewriters, Bombs, Jellyfish he patches in to a complex array of past and present literature and art. Many subjects will be unsurprising to readers of his novels Remainder, C and Satin Island. There is a strand of English dystopian writing that returns him time and again to J G Ballard, an interest in the affectless texture of everyday modernity that is schooled on the nouveau roman, and a fascination with the virtual that McCarthy traces back as far as the poetry of Stéphane Mallarmé. But McCarthy writes less expected essays too: about time and repetition in The Magic Mountain, about Kafka’s reflexive Letter to His Father, the laconic pop-conceptual art of Ed Ruscha and the “prosthetic imagination” of David Lynch.

In other words, McCarthy engages (or better, identifies with) a very broadly conceived artistic Modernism. Much of his nonfiction – Typewriters, Bombs, Jellyfish includes reviews, lectures and prefaces – has been an erudite defence of various modes of antirealism, most of them floated in the last century. (Though not all: there’s an excellent essay here about the dizzying geometry of Tristram Shandy.) Against these works he diagnoses (or is it imagines?) a “naive or uncritical realism dominating contemporary middlebrow fiction”. You could object that McCarthy has rigged his own critical game with a sneering word like “middlebrow”. But the truth is he knows the distinction between credulous realism and sceptical experiment is itself quite callow. Nineteenth-century realists – Flaubert, for instance, with his endless, exacting descriptions of things – could be vexing and estranging, while the antirealist avant-garde of the early 20th century had more of a purchase on unruly reality.

James Joyce is McCarthy’s best example of the latter tendency. Why Ulysses Matters, first published in the London Review of Books in 2014, identifies Joyce as a Bataille-like “base materialist”, with his “soiled goods” and “slopperish matter”. Then again, the novel is also a study of urban and modern media, a book that both depicts and mimics the telegraphic prose of newspapers and advertising. And finally, Ulysses is an affront to the form of the novel itself, not just to its realist antecedents. Joyce exhausted 19th-century fiction, but also “every alternative, every avant-garde manoeuvre imaginable”.

But aren’t these insights also venerable conventions of Joyce criticism in particular and academic Modernist studies more generally? The sort of readings already canvassed, in the decade or so after Ulysses appeared, by the likes of T S Eliot, Edmund Wilson and Walter Benjamin? The wonder is that McCarthy still feels the need to mount such polemics, and an uncharitable suspicion would be that he does it because he’s that most English of things: a Europhile writer who actively needs his literary compatriots to be mild and unadventurous, so that he may do his avant-garde thing. We all need phantoms to fight against, but it is sometimes curious to hear a writer – or critic, though that is not quite it – of McCarthy’s extreme intelligence insisting that the present is dominated by realist dullards and we should all look back to Joyce, Nabokov and Robbe-Grillet for inspiration. Even if it’s true that the English novel mostly resists experiment, wouldn’t you just look elsewhere?

Of course, McCarthy is not immune to contemporary literature, or oblivious to the ways the recent past presses on the present. He has written perceptively, thrilledly, about the “nouveau nouveau roman” of Jean-Philippe Toussaint. But he’s at his most suggestive in a very recent lecture about Kathy Acker, whose abject and infidel “heteroglossia” he brackets with the work of Julia Kristeva and the cyber-theorist Donna Haraway. There’s a slight sense that McCarthy has corralled most of the women in his book into this final chapter; but it’s also an intriguing glimpse of what sort of writer and thinker he might be if he gave up summoning the same Modernist spectres from the stormy weather, and listened to other noises in the air.

Brian Dillon’s ‘Essayism’ was published in June by Fitzcarraldo Editions. He teaches critical writing at the Royal College of Art.

Netflix: 10 of the best new shows and films to watch in March
Real news has value SUBSCRIBE