‘Raven took the stage like it was an altar or a pulpit, with reverence to the word’ 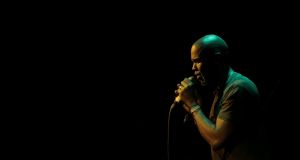 Raven: he had the courage to be a writer, not just to begin, but to keep going, to keep making art till the end, with daring and style. Photograph: Alexandra Vetter

I first met Raven back in 2007, in the upstairs room of a dive bar on Camden Street, at an open mic night for poets and musicians called Naked Lunch, but it put poets at the forefront of the night, not the music. It was the exact place I was looking for at the time. Dark, dingy, open, safe and free!

The people there were the exact people I was looking for too. Poets, my age more or less, they read the books I did, they said the things that needed to be said, they were all cool as fuck, and the coolest of them all was Raven. He took the stage like it was an altar, or a pulpit, he took it with reverence to the word, and to the people in front of him, and to his own spirit.

He wore all black, his goatee beard was sculpted finely and was greying upon his dark skin. His eyes almost closed, he performed his poem Manifesto, a meditation on the breath, the voice, life and death. And he was cool. Cool like Miles Davis’ Kind of Blue album is cool, cool like Big Daddy Kane, cool like Grant Morrison at Disinfo Con, cool like The Velvet Underground, Patti Smith and Fab 5 Freddy. That sorta cool. A coolness that can’t be put on, you either got it or don’t got it. Raven had it.

In those burgeoning years, in what people now call the spoken word scene in Ireland, it was all do it yourself, it was made and built and run on a punk attitude and optimism, and love of the art, and cheap mics and stands, and beer, and sweat, and gaffer tape holding it all together. Raven was always there, always turned on, and tuned in, always listening, really listening to what was being said, and teaching. He had that bit of extra wisdom, he was 10 years older than most of us, but didn’t look it.

He brought a professionalism to his craft in performance on stage, that improved the other performers. I for one learned so much from watching how he didn’t just say the poem, he didn’t just learn the poem off and then recite it from memory and that was that, he let the words enter him, become part of his movement, changed diction, pace and tone to reflect what he was saying. All these tips I got from him, just watching and listening to him.

His poetry collection, The Living, The Dead, and Americans, showed his skill as poet on the page. Then there was his work in hip-hop with mixtapes from the underground, his diversity as an artist, moving seamlessly between stage, page, music and spoken word. He was also a short film maker, an actor, and quite possibly one of the most over-the-top theatrical personas to be seen live at a festival. A kind of sartorial genius who could get away with wearing items such as giant clown shoes, top hats, feather boas, biker goggles, fish tail coats, sometimes mixing and matching any number of those together in the same outfit. Only a man of extraordinary style and coolness could pull off such a feat.

When the news came down that Raven had passed on, or passed through this realm of phantoms called life, a deep shock and an even deeper grief was expressed online, from so many of his friends, family, poets, artists, actors, film makers, dancers, rappers, folk from all areas of life, young and old, both here in Ireland and his home nation of America.

I was asked to write this tribute, and think it an honour to write it for a true poet, a real artist, who always maintained his integrity, for he was no one’s ad-man, no one’s imitator, he was an original, he was genuine, he lived and breathed the life of an artist for decades, a great feat in its self, to go at it all in, with the pen, and the voice, and the mic, and the beat, and lay it down for the people, speak it out in lines.