The week’s best exhibitions: From Glass Biennale to Tai Shani

Plus: Contemporary American art in Belfast and the Dún Laoghaire Open Exhibition 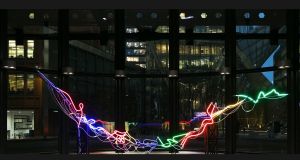 LP at 20 – 20 years of Limerick Printmakers
Luan Gallery, Elliot Road, Athlone, Co Westmeath. Until February 9th
Since its foundation in 1999, Limerick Printmakers has been a creative hub and an important focus for many powerful artistic personalities. It is also testament to the dedication and resourcefulness of its LSAD graduate founders – Melissa O’Brien, Claire Boland and Kari Fry. With work by Dietrich Blodau, Gavin Hogg, David Lilburn, Des McMahon, Suzannah O’Reilly, Kate O’Shea, Fiona Quill, Jim Sheehy, Verona Stellet and many more.

On Refusal: Representation & Resistance in Contemporary American Art
The MAC, 10 Exchange St West, Belfast. Until Janaury 19th
Work by six artists working out of the United States, Paul Stephen Benjamin, Elliott Jerome Brown Jr, Aria Dean, Troy Michie, Arcmanoro Niles and Sable Elyse Smith, whose work addresses and challenges traditions of bodily representation in ways that configure “the body as a site of political enquiry.” Questions of “race, gender, sexuality and class.” Curator Clare Gormley sees the work as relevant way beyond the confines of the US – in Northern Ireland, for example.

Utopia Dystopia – dlr Open Exhibition 2019
dlr Lexicon Municipal Gallery, Dún Laoghaire. Until January 26th
Artists from the area – Dún Laoghaire Rathdown – were invited to submit work on the utopia dystopia theme – a broad canvas, given that the world is usually rife with examples of both. And Aoife Ruane set about crafting a show based on what they offered.