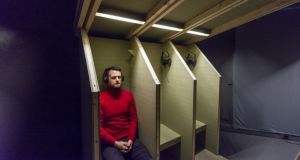 John Conway, The Making of a Place

Pallas Projects is tucked away down a lane on The Coombe, past BIMM’s outpost (the music school’s main building is nearby in Francis Street, though there are plans to expand facilities in The Coombe). Meanwhile, what was for a long time a construction site on Dean Street is now a substantial hotel, the Hyatt Centric. Venture up the lane past the BIMM entrance and the aspiring musicians trekking to and fro, as often as not lugging guitars or other instruments, and a gate to the left leads you into the Pallas courtyard.

The door into the exhibition space is suitably innocuous for a portal into the Tardis-like experience that is the Pallas Periodical Review #9. Tardis-like is true not just for #9, in fact. Each Periodical Review has challenged and transcended the distinctly modest physical proportions of the available space. Which is all the more remarkable given that the reviews look back over a year’s countrywide arts activity.

They do so ingeniously. Rather than gathering a mass of highlights and making a big exhibition in the mould of the RHA Annual, say, or its one-time modernist counterpart, the Irish Exhibition of Living Art, they take an oblique, fragmentary approach.

So, as the title suggests, each is an exhibition as a kind of journal, alluding to events and individuals, from big group shows to solos to curatorial initiatives or whatever, without claiming to offer any comprehensive overview or summary: “The gallery as a magazine-like layout of images that speak.”

For each review, Pallas’s Gavin Murphy and Mark Cullen are joined by guest selectors. This year’s are Imma curator Seán Kissane and Workhouse Union (who work with many individuals and groups across a range of disciplines with, currently, Rosie Lynch and Eilís Lavelle as team leaders).

The end result is indeed a miracle of compression that doesn’t feel over-crowded. The trick is to frame each constituent piece as a stepping stone to a larger body of work or something else beyond the immediate confines of the exhibition. RGKS Cribs, for example, dips into an intriguing project by RGKSKRG (Rachael Gilbourne and Kate Strain), a series of inventive visualisations of visits to artists’ studios. Eithne Jordan (one of her paintings is also included), Vivienne Dick and Christopher Mahon feature, each in a distinct vein and each illuminating in unexpected ways. It’s a great format.

Murphy nominated RGKS, and it’s noticeable that he especially embraced the idea of drawing in collective endeavours, including Scoil Lorcáin’s ambitious summer exhibition . . . And the Days Run Away Like Wild Horses over the Hills, the brainchild of John O’Donoghue. Murphy rightly points out the value of focusing on the school as being “as magical a space as any for artworks that are imbued with a joyful curiosity about the world . . .” He also noticed the Model Sligo’s presentation of the invigoratingly eclectic Graeve (Jobst) Collection (the subject of an opening performance, Tengu, by Léann Herlihy).

Where Murphy responded to groups, Kissane picked up on individual voices. There’s just a single photographic print by Spanish photographic artist Helio León, but it is immensely atmospheric: a nighttime view of a figure with burning detritus on a city street. León’s intense, emotionally charged work unfailingly draws you into a world of vulnerability and passion. Kissane was similarly drawn to Dorje de Burgh’s autobiographical Dream the End, exploring the artist’s relationship with his mother, which featured initially in PhotoIreland 2019 at Dublin Castle.

Striking quite a different note but still emotionally invested, Laura Fitzgerald’s witheringly satirical takes on the artworld’s narcissistic self-absorption are extremely funny and pose difficult questions, questions not confined to the artworld.

Workhouse Union also concentrated, by no means exclusively, on solo voices, including Katie Watchorn’s rigorous, spare works, distilled from her concentrated absorption in the reality of the farming life. Ciarán Murphy’s frank, direct representations arose from his experience of the Fingal coastline during a residency. Well worth highlighting, Marielle MacLeman’s extraordinarily intricate, labour-intensive exhibition, In Course of Rearrangement, was initiated by The Lab and Galway Arts Centre. Its constituent works, immensely varied in form and materials, were ingeniously steeped in the history, environment and current development of the Liberties in Dublin.

Among Cullen’s nominated artists, Colin Crotty has developed a distinctive individual voice in stylised representational paintings that foreground their own artifice. The individuals he depicts usually don’t quite connect with the staged-looking setting they occupy. They are often at a loss, disorientated. Cullen picked up on Lilian Puthod’s Pallas Studios installation, How Long After Best Before, another example of disorientation. It placed the visitor in “a strange ‘no place’ somewhere between a concept store or an archaeological site . . . yet to be discovered.”

Another of his choices, John Conway’s The Making of a Place, came from NCAD’s MA show. A row of wooden booths is equipped with sets of headphones. Each audio track is an account relating an individual’s experience of the Central Mental Hospital. Based on extensive research, encompassing architectural design as well as healthcare professionals, Conway’s work posed the simple question: How does the elaborate mass of theory, planning and intentions translate into the lived reality?

This is not a comprehensive account of the Periodical Review, just as the Review is by no means comprehensive but with luck will convey some sense of its flavour. Visit it and chances are it will prompt you to find out more about some of the artists whose work you encounter.