The oil painting is a typical work of artist, if relatively dark in tone 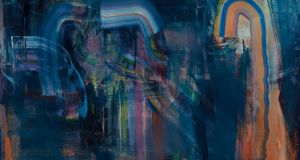 What is it?
Sleep of Reason is a painting by Diane Copperwhite.

How was it done?
It is made with oil paint on canvas, and it is relatively large. Unusually enough, Copperwhite has been consistently comfortable in alternating between small and large-scale works. She paints with great energy and, she has noted, generally works and reworks, adding and removing paint, investing the surface with tremendous pace.

Where can I see it?
It forms part of Copperwhite’s outstanding new exhibition, Proto Fiction and the Sleep of Reason, at the Kevin Kavanagh Gallery, Chancery Lane, Dublin, until November 2nd (kevinkavanagh.ie), which has the depth and richness of a survey show.

Is it a typical work by the artist?
It is quite typical, if relatively dark in tone. But then, the title references Goya’s celebrated etching, plate 43 of his Caprichos: “El sueño de la razón produce monstrous” – The sleep of reason produces monsters. The full accompanying epigraph elaborates somewhat, identifying the problem as being fantasy freed from the restraint of reason. In Goya’s preparatory sketches and in the etching, a man working at a table – the artist? – has fallen asleep and a host of nightmarish creatures including bats mass around him. Similarly, in Copperwhite’s painting, potentially threatening forms coalesce out of the darkness.

It is surely fair to see her evocation of Goya as a comment on our own troubled historical moment. Mind you, she does not tend to comment on events in a direct way in her work, but all the evidence is that she is very interested in how we construct our images of the world, how memory, dreams and fantasy feed into what we then take to be real. The mechanics and uncertainty of perception and the phenomenon of time are certainly consistent preoccupations for her. These concerns have become all the more pertinent with the rise and rise of digital communications technologies and social media, and the pre-eminence of the virtual and the spurious.

All of which emerges through the medium of paint, for Copperwhite, rather than via a newer technology. It was immediately apparent, as far back as her NCAD degree show in the mid-1990s, that she is a natural painter. Even at that stage her distinctive palette was apparent, a definite preference for a limited number of primary and secondary colours (pinks, greens, yellows, blues) generously leavened with white, plus the lively, choreographed interplay of warm and cool hues. And always with that sense of how hard it is to pin things down, to fix an image, and the absence of any compulsion to do so.