Patrick Pye, stained-glass artist and ‘one of the great individualists’, has died 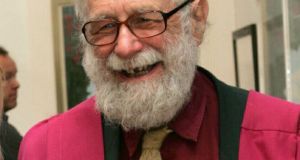 “One of the great individualists,” is how artist and Royal Hibernian Academy (RHA) president, Mick O’Dea, describes Patrick Pye who died on Thursday. It’s a testament to the rapid pace of change in both art and Ireland that Pye’s individualism was best defined by his religious faith, and expressed through his unique and beautiful paintings and prints, as well as alterpieces and stained glass windows which are also reflective of that faith.

Seen through Pye’s vision, faith is something transcendent, yet Biblical characters retain an engaging humanity.

Pye was born in Winchester, England in 1929 and studied painting under the sculptor Oisín Kelly. He later studied at the National College of Art and Design. It’s fascinating to see both artistic and religious influences come together in his work, so that an Ascension scene carries traces of his hero El Greco, with the colour palette of Mainie Jellet and Evie Hone mixed in.

This isn’t to imply his work isn’t anything but original. It’s a strong reminder of how rich Pye found the creative world around him. “He was a fantastic colourist,” continues O’Dea, “and conceptually very strong. It’s informed by his religious faith, but it’s a faith in the deeper things, there’s nothing transient about his work.”

Irish Museum of Modern Art (IMMA) curator Rachael Thomas worked with Pye when she was curating last year’s exhibition on the spiritual in art, As Above So Below.

“I went to his house to meet him,” she recalls. “He was such a modest man, very humble but very humorous too. And the romance between him and his wife Noirín was very special to see. I remember him saying that he was religious but not religious, and that he was inspired by the act of painting.”

With a room devoted to his work, the IMMA show brought Pye back into the public eye, and Thomas was struck by the public response: “It showed his work as very vibrant, very alive. It’s a shame the recognition came late.”

The RHA held a retrospective of his work in 1997, yet perhaps a desire to throw off the control of the Catholic church meant work such as this came to be ignored by many.

Rye enjoyed many highlights over the years. He was awarded an honorary doctorate by Maynooth University in 2005, and his painting Pity for the King of Friday, 2010 was acquired by the Vatican last year.

Nevertheless, the Arts Council’s recommendation last year to remove the “Cnuas” (the €17,000 annual stipend that some celebrated artists are elected to receive) was a low point for an artist who was one of the founder members of Áosdana.

Pye converted to Catholicism in his 30s. “Ever since I’ve known him, he always appeared to be an old man,” O’Dea recalls. “Almost like an Old Testament figure from one of his paintings. As he grew older it was as if he grew into his skin.”

A Mass was held two years ago to celebrate his work in his studio at Piperstown, at the foot of the Dublin Mountains. “That was the last time he worked in the studio,” O’Dea remembers. “He died with all the family in attendance,” adds O’Dea. “And they sung him into Heaven. So, like one of his artworks, he was ascending.”

Despite his Catholic faith, Pye will be buried in accordance with his own wishes at St Maelruain’s, an Anglican church in Tallaght. It’s a choice less surprising when you discover that artists Oisín Kelly, Evie Hone and Elizabeth Rivers rest there too.