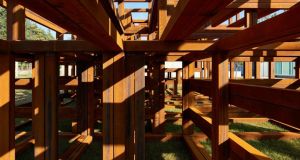 What is it?
Boxes of Air (2015) is a monumental sculpture in Cor-Ten steel by the Dublin-born artist Sean Scully. The massive, over 15-metre long construction is indicative of Scully’s capacity for thinking big. But he doesn’t use scale just to impress; he is equally at home with diminutive watercolours on paper as he is with enormous multipanel oil paintings.

How was it done?
Cor-Ten steel is a material much liked by architects and sculptors, and often misunderstood by people who encounter it by chance and assume that someone has used some dodgy steel. Also known as weathering steel, Cor-Ten produces a natural patina of oxidation, which can look like a bad case of rust. Scully first conceived his well-known Wall of Light series of paintings in Mexico, and has always felt a close bond with the country. His Boxes of Air are like Walls of Light turned inside out. The “boxes” are defined by sturdy frameworks of steel but are otherwise open, so that when one looks at them they frame, and figuratively contain, many blocks of light, colour – and air – changing with the time of day, angle of the sun and atmospheric conditions. The oxidation gives the surfaces of the geometric structure a forgiving, paint-like textural quality.

Where can I see it?
One of Scully’s Boxes of Air sculptures is the centrepiece of his exhibition San Cristóbal, which has just opened at Luis Barragán’s celebrated modernist equestrian and residential complex, Cuadra San Cristóbal in Mexico City (on view until March 24th). While Scully’s recent sculptural works are sited throughout the external spaces, the interiors, including the horse stalls, are occupied by his paintings on aluminium and copper.

Is it a typical work by the artist?
Scully has made several sculptural works in the recent and not so recent past – there’s a sculptural, solid stone version of a Wall of Light at the entrance to the University of Limerick, for example, and another Wall of Light stone sculpture is on view at Cuadra San Cristóbal. He is, though, unquestionably best known for his paintings and, to narrow it down still further, as they are often informally described, his stripe paintings: blocks of colour arranged in vertical and horizontal bands.

Born in Dublin in 1945, Sean Scully grew up in London and moved to New York in the mid-1970s, though he has consistently retained a genuine attachment to and fondness for Dublin – some of his work, gifted to the gallery, is permanently on display in a dedicated space in the Hugh Lane on Parnell Square. He found the art world in London constricting and decided to take on New York, no easy task. In fact he struggled to gain a toehold there with his rigorous, tightly organised, hard-edged abstracts until, at a make-or-break point in 1981, he made a very big composite painting, Backs and Fronts, on a number of doors joined edge to edge. Assertive but also suggestive of doubt and vulnerability, the work allowed expression of emotion that had previously been held in check. It put him on the map.

Since then, he’s gone from strength to strength, developing his painterly language carefully and incrementally and gaining recognition and acclaim internationally. He’s one of relatively few contemporary artists who would be widely known among the non-art public in Ireland, for example.