Is the London fatberg a metaphor for Brexit?

One of the biggest "fatbergs" ever seen in Britain - a ball of fat as long as three football pitches - has been found blocking a Victorian-era, east London sewer. Video: Thames Water 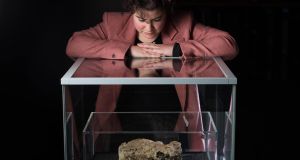 Katie Balcombe looks at the last remaining piece of a monster fatberg that was discovered in Whitechapel sewers last September, on display at the Museum of London. Photograph: David Parry/PA Wire

As soon as it was discovered lurking in London’s Victorian sewers in September 2017, Twitter users began asking if the Whitechapel fatberg was a metaphor for Brexit. Weighing 130 tonnes (equivalent to 11 London buses), the mass of congealed fat, wet wipes, condoms, nappies and oil had brought the flow of sewage in the local tunnels to a standstill. By November the BBC headlines reported “victory declared” after a “nine-week battle”. London’s sewers network manager Alex Saunders claimed the “beast is finally defeated”. He also recounted how the fatberg “smells like rotting meat mixed with the odour of a smelly toilet”. In February the last remaining fragments of the fatberg went on display at the Museum of London, described by the press as the final “chunk of a toxic monster”. Could it be a metaphor for Brexit?

What deeper fears and fantasies might the fatberg tap into? Visitors to the Museum of London exhibit are greeted with a full-length set of protective clothing worn by those who waged “war” on the fatberg. The walls of the display are adorned with black and yellow stripes of warning tape, bio-hazard symbols, and a video display in which the conservators explain they dried out and tightly sealed off their fatberg fragments to try and reduce the risk of it passing on diseases. In two cases, the final traces of fatberg sit, reduced to small soil-like clumps.

Two reactions seemed to crop up time and time again for visitors: disgust and disappointment. While the tote bags and T-shirts of the museum shop depict a giant sticky monster crawling out of the building, there was something particularly underwhelming about the delivery of the fatberg itself.

Perhaps there are parallels here with Brexit: I doubt its delivery will live up to the dreams and anxieties that fuelled the referendum campaign, and the continued bitter divisions in British politics since. But let’s stick with the idea of the fatberg. Despite huge political differences between Leavers and Remainers, the two sides might share more than first meets the eye. Although they take different targets of attack, the current or future British relationship with the EU is consistently described through metaphors of fudge, contagion, pollution, sewers, rats, zombies, mud, mess, excrement, snakes, toads, floods, nightmares, monsters, madness. This imagery all belongs to the literary and artistic genre of the Gothic, and for one important reason: they all represent ideas of powerlessness, losing control, and material states of mixing.

Why do these metaphors of sticky morass and uncontrollable contagion matter? They have a longer European history, tangled up with 20th-century wars. In Klaus Theweleit’s psychoanalytic study of German interwar masculinity, Male Fantasies (1987), he observed how soldiers returning from the first World War saw pacifists back home as slimy and pulp-like. One recounts: “Surely we are closer to enemies . . . than any pacifist . . . surely we are achieving something more important, by killing each other here, than if we were to coalesce into some great pulpy mishmash.”

The centenary of the first World War certainly haunts the Brexit negotiations – and so too does the spectre of the “pulpy mishmash”. To mark the centenary of the Battle of the Somme, last July Dutch artist Damian van der Velden exhibited The Mud Soldier (2017) in London’s Trafalgar Square. Made out of Flanders mud, the sculpture of a soldier slumped on the ground was encased in a metal frame that sprayed artificial rain. Over the course of five days, his body transformed to mud and mush; excremental flows of sludge and slime. What does this image of British-European relations represent in the midst of Brexit talks? Do the material qualities of The Mud Soldier and the London fatberg share something in common here?

Britain will have to face its diminished status on the world stage, and its considerably smaller negotiating clout against 27 other EU nations

The 2016 Brexit campaign was built on the slogan “take back control”. A persuasive fantasy, certainly, for a Britain still struggling to come to terms with its loss of empire, its smaller place on the world stage and its dependence on its neighbours. The second World War seems to be a continual reference point for Brexiteers precisely because – bolstered by films like Dunkirk (2017) – it allows them to craft a narrative of Britain standing alone and in triumph against a totalitarian Europe. “Take back control” worked as a rhetorical strategy because it was so vague it could speak to people’s greatest fears and fantasies. And yet, what “take back control” really boils down to is a feeling of mastery – over oneself and others. Since the referendum itself, Brexiteers seem continuously confused or surprised that the vote has not given them the power to order the EU about. That there could or might have to be compromises has inspired raging backlashes in the anxious hunt for “traitors”.

The trouble is, Brexit is not going to play out as neatly as a 21st-century Brexiteer’s idealised image of the British Empire. Britain will have to face its diminished status on the world stage, and its considerably smaller negotiating clout against 27 other EU nations. We will not be able to round up and expel or eradicate all of the marks Europe has and will continue to leave. So perhaps the London fatberg is a metaphor for Brexit. Both Leavers and Remainers use Gothic metaphors – particularly sticky mush and morass imagery – as criticisms, but rather than dismiss these semantics so quickly maybe we should pay attention to them. These metaphors are invoked in order to call for the vanquishing of whatever they are being used to attack. And yet, they continue to haunt.

Victory was declared on the Whitechapel fatberg, but every day new fatbergs continue to coalescence and clot under London. The fatbergs frighten and fascinate because they point to the limits of our desire for total mastery. Brexit has the same effect: that’s why both Leavers and Remainers keep returning to the Gothic as a way of articulating their sense of powerlessness at the process. Maybe there is a lesson to learn here. Not only can we not “take back control” – but the very desire to have total control in the first place is only ever going to fall short. Even in the event of no deal, Britain is not going to be able to achieve a complete “clean” break with the EU in the way certain Brexiteers demand and Remainers fear.

Europe and Britain are, and have long been, entangled – influencing and impacting on each other. Metaphors of mud, morass, fluid mixing should be held on to – and celebrated – precisely because the remind us we are indelibly interconnected and interdependent. The “fudge” of Northern Ireland, after all, is certainly testament to ties between Europe and Britain that cannot be easily dismissed. Yes, the London fatberg is a metaphor for Brexit: despite British dreams of mastery, we are must come to terms with the fact we are largely powerless. Rather than rush to eject points of intimacy and entanglement with Europe, we should hold on to points where identities mix and mingle – like the material mush of the fatberg itself.

Edwin Coomasaru is an AHRC-funded PhD student at The Courtauld Institute of Art, researching Northern Irish masculinity and the legacy of the Troubles in contemporary art and visual culture