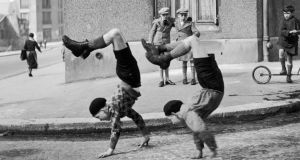 The lovers pause in front of the cafe terrace. His right hand clasps her shoulder. Their hairstyles and clothing and the vintage cars on the Rue de Rivoli behind them date the scene to post-second World War Paris. They are stillness in a sea of motion, of hurried passers-by and traffic. An indifferent man in a suit, spectacles and beret, ignores them. As in Rodin’s sculpture, the man is tense, his muscles flexed. The woman abandons herself, almost limp, to his embrace.

Robert Doisneau took “Le Baiser de l’Hôtel de Ville” on commission for Life magazine in 1950. Reproduced on countless postcards, calendars, desk diaries and posters, it became one of the best known images of the 20th century.

The picture epitomised the humanist school of photography that started in France in the 1930s, was interrupted by the second World War and re-emerged to depict the hardships of postwar existence, as well as its small joys and pleasures. Doisneau, Henri Cartier-Bresson and Willy Ronis were its founders. Marc Riboud and Hungarian-born Brassai were prominent members.

The humanist photographers preferred black and white to colour, the “little people” to the gentry. They prided themselves on being multidisciplinary, and maintained close friendships with other artists. Doisneau photographed Georges Braque and Alberto Giacometti in their studios, and Picasso at his kitchen table in Vallauris, with a visual joke of finger-shaped bread loaves where the painter’s hands might have been.

More than any other photographer, Doisneau is identified with the cobble-stoned streets and old zinc-covered bars of Paris. He scoured poor neighbourhoods for moments of grace, a man playing a trumpet on a folding chair beneath a flowering tree, brides and grooms in grubby streets and celebrating in working-class bistros. He portrays children intent on reaching destinations or playing timeless games. The couple at the centre of La Dernière Valse du 14 juillet, Paris 1949 light up a deserted, late night street with magical presence.

Many of Doisneau’s pictures could not be shot in contemporary France, because no one can be photographed in public without permission, and subjects retain legal rights to their image. In old age, Doisneau was upset by two lawsuits from claimants demanding payment for having been depicted in Baiser de l’Hôtel de Ville. One couple could not prove they were in the photo. Francoise Bornet, who was a theatre student when she posed for the photo, lost her suit on the grounds that her face was not identifiable.

Doisneau left some 450,000 negatives when he died in 1994. His daughters chose 150 photographs for a retrospective held at the Museum of Ixelles, near Brussels, in the autumn and winter of 2017-2018. The bilingual catalogue, published by Racine/Lannoo, is a compendium of Doisneau’s poetic realism.

“I did not set out to create a body of work. I just wanted to leave behind the memory of a little world that I loved,” Doisneau said.

Every Doisneau image tells a story. Mademoiselle Anita (1951) could have come straight out of an Édith Piaf song. The young woman casts her eyes downward, sitting at a corner bistro table. She wears a strand of pearls and a low-cut dress, her lips curling in the slightest smile. When he asked permission to photograph her, Doisneau said, “She uncovered her shoulders, shrugging off her bolero jacket, so it was obvious she was happy to do so... She was hoping for a dancer, she got a photographer instead. And since that day in 1951, Anita remained frozen in time.”

Doisneau travelled to the United States for the first time in 1960, on assignment for Fortune magazine to photograph golf courses. He produced a light-hearted ethnographer’s study of the Palm Springs desert playground. His technicolour images of sports cars, motels, swimming pools and sunbathing matrons were rediscovered in 2007, and figure prominently in the Ixelles catalogue. The Palm Springs photographs appear to originate from a planet and epoch far distant from Paris. All is artifice in them.

Doisneau’s father was a quantity surveyor who married a factory owner’s daughter. Like Cartier-Bresson, Doisneau was ashamed of being bourgeois. He and his wife Pierette spent their married life in the working class suburb of Montrouge.

After the horrors committed by the Nazis, anything remotely right wing was rejected. Doisneau worked for the Communist weekly Action after the war, then for diametrically opposed Vogue for two years before he joined the trade unionist magazine La Vie Ouvrière. Doisneau said it had been an error of judgment and a class betrayal to have wasted time producing what he called “photos of baronesses”.

The word “iconic” became a cliché years ago, but Doisneau’s Baiser de l’Hotel de Ville is, along with Robert Capa’s Spanish Civil War classic, The Falling Soldier (1936), one of perhaps a dozen truly iconic images of the last century.

Different as they are, both photographs created controversy. Doisneau freely admitted to having staged Baiser. Though Capa denied it, there is evidence that his dying Republican soldier was faked. Even in our age of Photoshop and fake news, viewers still want to believe they are looking at the truth. Photographers draw an ethical distinction between works for the purpose of illustration, which they feel justified in retouching, and news, which should remain undoctored.

If there are iconic images being shot today, they are probably lost in the sheer volume of the deluge. The smartphone has made everyone a photographer and inundated our world with selfies.

The legacy of Doisneau and the humanist photographers survives. His oeuvre reminds us how much our world has changed, and forms a tender, collective memory of a charming and romantic Paris, a black and white monument to what Doisneau called “the little world that I loved”.