Fragments of the destruction of Dublin snatched from a skip 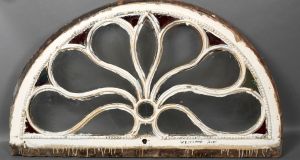 Artist, archivist, historian, conservationist and writer Peter Pearson is indelibly associated with Dublin, and with efforts to preserve and document the inner city during a phase of wholesale destruction in the second half of the 20th century. Dublin Fragments, comprising items from his extensive collection of retrieved fragments and artifacts, together with a selection of his paintings and collages, is a fascinating, disconcerting glimpse into the living fabric of the city. In many respects, it beggars belief.

The majority of the items are aesthetically rich pieces fashioned with exceptional skill and attentiveness by, mostly, Dublin craftspeople. One would think they belong in a municipal museum or archive. Yet they were acquired not at auction, say, but guerilla fashion, plucked out of skips destined for the dump or snatched from the debris in the midst of demolition. Hugely destructive, indiscriminate demolitions, Pearson notes, as ball and chain cut a swathe through Georgian terraces.

He still seems a bit perplexed at the saga which, for him, lasted essentially from the early 1970s to the early 1990s. Not continuously – when he graduated in art history he spent time living in Venice, for example, and then in Paris while he studied painting – but nonetheless throughout these years he was alert for news on demolitions and always ready to get to the sites, usually by motorbike. Demolition crews would try to wrong foot protestors by working on bank holidays, say, or by night.

It was another world, Pearson recalls. Now sites are fenced and sealed, strict health and safety regulations are enforced, and the material is graded and assessed. Then, he and indeed others could explore a site even as work proceeded around them.

It was glaringly apparent that not a thought was given to the historical or intrinsic value of what was being destroyed. Functional materials like slates and floorboards, on the other hand, were often recycled. But there was no effort to devote the time and care needed to extract fanlights, decorative plasterwork, signage, railings, detailed pieces of joinery, tiles, fixtures and fittings. Pearson gradually accumulated a collection of such items.

In a way, his involvement with the city has consistently had a dreamlike quality. When he was studying art history he was also painting, in ways that accommodates the surrealism of Hieronymus Bosch.

In the late 1980s, he and his brother Charles were live-in caretakers of Castletown House in Co Kildare. Then he acquired a substantial house in Monkstown which he and Charles set about restoring. His involvement with conservation movement developed throughout. Most remarkable, in many respects, was his involvement with an extraordinary Dublin address, the Sick and Indigent Roomkeepers Society building. So in a way, he was living consistently with one foot deep in the past, but not really. He had figured out a means of being in the present while acknowledging the past. He was not, that is to say, one of those people who pine for some mythical golden age – he has observed that he is quite fond of dereliction, that things move on regardless.

And he is not, strictly speaking a Dublin obsessive – he moved out to Co Wexford at the beginning of the present century. In an essay on his paintings, Peter Murray put his finger on a vital point: “Pearson’s work is deceptive. At first glance it can seem elegiac and atmospheric, but his aesthetic sensibility is firmly rooted in the real city, with its streets and people, and not in a fictionalised, rose-tinted spectacle.” Dublin Fragments should not be seen as a collection of historical samples, rich as it certainly is as such, augmented by “art” in the form of paintings and collages of Dublin.

Pearson’s fragments are amazingly informative and immediate in bringing aspects of the city to life. He mentions that, while organizing the exhibits, he refrained from specifying the location of the items. But visitors, as they encountered them, immediately looked for information on exactly that, and not so much in the interests of documentary precision. It was, as is each preserved object, plucked from its time and place, as a kind of Proustian Madeline, triggering not just memories but an entire world and time.

That is, in fact, exactly how they work, and the mechanism usually has to do with the skill and personality of the maker’s touch. Even where the object is bent and battered, because of rough handling, somehow that handmade quality comes through all the more. While each piece is a way into a story, be it a story of a place hardly remembers or, all too often, a Dublin institution such as City Hall and Dublin Castle, Switzers and Frascati House in Blackrock (its destruction the subject of vociferous protest at the time and the centre of a planning disaster from which Blackrock has never recovered).

Since Pearson began assembling his collection, artists have increasingly worked with archives, so that the practice is now mainstream and, for that matter, often central and award-winning. Dublin Fragments should certainly be seen not so much as a selection of individual documentary items, more as a richly textured sculptural installation. The Irish Georgian Society has carried out invaluable work in documenting the collection which has been exhibited in several forms through the years. There are, and there should be, moves afoot to establish it in a settled, accessible home. Again, it is not a nostalgic or sentimental exercise, but an invaluable account of the city as a distinct, evolving entity.