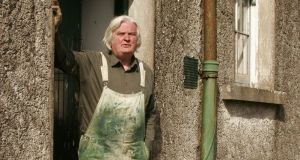 McSweeney, who was one of Ireland’s leading contemporary painters, died on Saturday morning.

Born in Dublin in 1935, McSweeney was a self-taught artist and had a particular fondness for painting the Sligo coastline, after moving to the area in the 1980s with his wife.

He became interested in art due to his father, who was an artist. This interest was fostered by visits to the Hugh Lane Gallery.

A member of Aosdána, he started exhibiting regularly in the 1960s in the Irish Exhibition of Living Art and the Oireachtas.

In 1967, he moved from Dublin to Co Wicklow, and following a sellout exhibition at the Dawson Gallery he gave up his job as a clerical worker and devoted himself to painting full-time.

Upon moving to Ballyconnell in Co Sligo in the 1980s, the bog and shoreline became constant motifs in his painting.

He won several awards, including the George Campbell Travelling Award, the Carroll Award and a medal for the Claremorris Open Exhibition (1987-8).

A neighbour of McSweeney, Brian Leyden, said the artist “had truly a remarkable talent”.

“He imposed his vision so well on the bog landscapes of Ballyconnell. When you look into the bog pool, you just see McSweeney, which is extraordinary,” Mr Leyden told The Irish Times.

“It’s a great gift and that’s what I’ll remember him for. He was a lovely man to talk art with, he was so knowledgeable.”

McSweeney is survived by his wife Sheila and their five children.

His remains will lie in repose at his home on Sunday and his funeral will take place at St Patrick’s church in Maugherow on Monday at 11am.