Lucian Freud and Jack B Yeats: A couple of outsiders side by side 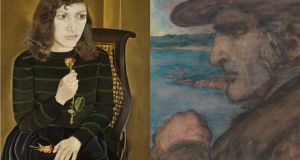 Jack B Yeats and Lucien Freud are not a particularly obvious artistic pairing. True, they were both outsiders of sorts, both representational artists, both individualists who followed their own paths, remaining indifferent to the prevailing artistic fashions. But those paths diverged considerably.

As a painter, despite changes and developments within his work, Freud remained an obsessive – obsessive not in any pejorative sense – realist, intently focused on his subjects, incrementally building detailed descriptive views, while Yeats, with realist roots as an illustrator, painted increasingly expressively, using gesture and colour very freely and quickly, often favouring a palette knife over a brush, in expansive, theatrical compositions.

Life Above Everything is the latest instalment in Imma’s five-year Freud Project, initiated in 2016. The project centres on the long-term loan, from a small group of private collectors, of more than 50 works by Freud, including paintings and graphics. The 50-plus Freuds amount to a significant collection that includes some of his best, and best-known, works.

This is perhaps the most ambitious exhibition in the sequence so far, drawing in additional works by Freud but also, crucially, many outstanding works by Yeats, some rarely seen, from public and private collections.

The impetus for the show, curator Christina Kennedy explains, came from Freud’s assistant, sitter, friend, and her co-curator, David Dawson (with input from lead researcher Nathan O’Donnell). It was Dawson, himself an artist, who pointed out Freud’s admiration for Yeats and set things in train.

Freud owned a drawing by Yeats, The Dancing Stevedores, which hung in his bedroom (and is included in the exhibition). He’d purchased it from Pyms Gallery around 1988, but his admiration went back decades, as far as the 1940s, in fact, according to Anne Dunn, who was close to him. Yeats’s dealer Victor Waddington was one close connection. Freud’s friend Frank Auerbach too is an enthusiast: he regards Yeats as the best painter of horses ever. Freud also cast his eye over works by Yeats at auction, for a friend, a collector.

Freud visited Ireland quite a lot from 1948 to the mid-1950s. Initially, he and Dunn stayed at the Zetland Arms Hotel, on the bay at Cashel, Connemara, and they subsequently stayed in Dublin. They later revisited Connemara, incidentally, in the company of their respective spouses, Kitty Garman and Michael Wishart. The ink and tempera drawing of a beached boat in the exhibition probably dates from that second visit.

Freud was a social animal, and during his stays in Ireland he mixed with the Anglo-Irish aristocracy

Freud was a social animal, and during his stays in Ireland he mixed with the Anglo-Irish aristocracy. He was also, his biographer William Feaver notes, interested in Caroline Blackwood (who he married), a cousin of Garech Browne, whose home at Luggala they visited. Freud painted a stunning portrait of Garech, Head of a Boy, which, following Garech’s death has been sold.

Several of the paintings Freud looked at on request are in the show. They date mostly from the 1920s, when Yeats was moving towards a freer, more fluid manner of painting, but his work retained a high degree of representational clarity.

At one point Kennedy quotes Yeats from a letter he wrote to John Rothenstein, then Tate gallery director: “The painter always begins by expressing himself through line . . . then he becomes aware that line, once so necessary, is in fact hemming him in, and as soon as he feels strong enough, he breaks out of its confines.”

Look at Freud’s etchings, which at their weakest can come across as overly laboured, and one can see why he would like the definite graphic precision of Yeats’s earlier work particularly. Was Freud influenced by Yeats? Not in the usual sense of the term, nor is there any such curatorial argument in the selection and organisation of the exhibition.

Rather, Kennedy and Dawson suggest, “some of Freud’s motifs, themes and predilections are introduced as a filter for viewing Yeats’s paintings”, which might sound cautious but is a realistic and effective line of approach, and one that has led to a wonderful exhibition, layered with subtle echoes and illuminating associations.

Yeats’s iconic Man from Aranmore, for example, and other studies of male figures, find multiple counterparts in Freud’s portraits of men in standard issue suits, the businessman’s uniform. At first glance these individuals might seem more prosaic, but Freud finds mythic resonance in their rugged human presence, largely achieved through the prolonged, rigorous scrutiny his way of working entailed. Sitting for him was a long-term commitment. In their differing ways, both artists unfailingly convey a profound sense of inner life in their subjects, and they both do so purely by observing the external reality.

Freud prefers his sitters isolated. While Yeats also focused on single protagonists, or Waiting for Godot-like couples (as in the superb Two Travellers, from the Tate), he excelled at conveying a sense of the individual among the crowd. In his richly informative essay, James Finch makes one simple but vital point: Freud is a painter of stillness and Yeats a painter of movement.

In terms of overt influence, incidentally, Anthony Cronin, who was around at the time, was convinced that the work of another Irish painter, Patrick Swift, did impact on Freud, stemming from his time in Dublin, when they occasionally shared a studio. In a conversation with the curators reprinted in the show’s catalogue, Feaver appears dubious about the possibility, but acknowledges the continuing importance of their connection when Swift moved to London and was involved in the influential arts and literary magazine X.

Dawson who, with his unparalleled experience of Freud, is a mine of firsthand information and insight, chips in with his recollection of Freud’s liking for Patrick Kavanagh’s poems and James Joyce. Irish actor Helena Hughes is the subject of Freud’s Girl with Beret. Ireland was clearly important for Freud in many ways.

What the paintings of Freud and Yeats do share is a parallel pattern of development. Freud too went through transformative phases. From the late 1950s, for example, through the mid-1960s, he freed up his then established mode of painting, just as Yeats had done in the 1920s. Freud’s style was based on finely detailed, linear precision, at which he was by then a consummate expert (several outstanding examples feature in the show), and he veered dramatically towards a much more fluid, broad-brushed approach.

Some of the work made during this transitional time seem slightly adrift and it’s fair to say that his next shift was to find a way of restoring precision by other means, which he did, impressively, by slowing down the paint surface, which involved gradually using more paint, paint as physical stuff rather than colour.

Despite the unmistakable shift, it should be said that everything an artist learns, technically, becomes part of their toolkit, to be used when appropriate. Freud became incredibly accomplished at manipulating broad, relatively thick masses of paint to produce compellingly real images.

Not in the opinion of some observers, though. Freud has never lacked critics. Quite a few commentators felt that he pushed the method too far and, to be fair, in some of the later portraits included in Life above Everything, you can see that the concentrations of paint become dense, agitated, curdled masses of indeterminate, muddy colours.

Usually, and perhaps tellingly, such tortuous passages occur in the representation of flesh and bone, human and, more rarely, horses. It’s easy to lose sight of the fact that you are looking at part of a face, say. Freud snares the roaming gaze and challenges it with incoherence.

One could argue that late style Yeats does something comparable in quite a different way. The dissolution of the figure in late Yeats, whereby human subjects are rendered in terms of stabs of pigment, emphatic strokes that emerge from and verge on disappearing into the background, has been described as indicative of a crisis in figuration, a crisis related to an historical moment of anxiety.

Yeats articulates the figure through the energy, weight and emphasis of his gestures, something that works with his human figures but especially well with the horses he was so fond of painting.

Life above Everything is a superb show partly because no attempt is made to overplay the undoubted sympathy between the work of the two artists. They are allowed to be themselves, and the emergent connections are all the more convincing for that. Both curators note a tendency to categorise the painters nationally, which they oppose. That is, over-emphasise Yeats’s Irishness and you tend to diminish him in a wider context: that certainly does not happen here.

Life Above Everything: Lucian Freud and Jack B Yeats is part of the Imma Collection Freud Project. It runs at the Freud Centre, Irish Museum of Modern Art, Royal Hospital, Kilmainham, Dublin, until January 19th, 2020. Adults €8, Concessions €5. imma.ie

Nuns, non-virgins and a serial killer: Sharing stories through nature in west Cork
7