'Salvator Mundi', the last privately-owned Leonardo da Vinci painting and one of fewer than 20 by the Renaissance artist known to still exist has fetched $450 million at an auction in New York. Video: Reuters 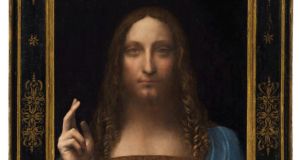 A detail from 'Salvator Mundi', an ethereal portrait of Jesus Christ which dates to about 1500. Photograph: Courtesy of Christie’s New York

He is a little-known Saudi prince from a remote branch of the royal family, with no history as a major art collector and no publicly known source of great wealth.

The revelation that Bader is the purchaser, according to documents reviewed by The New York Times, links one of the most captivating mysteries of the art world with palace intrigues in Saudi Arabia that are shaking the region.

Bader splurged on this controversial and decidedly un-Islamic portrait of Christ at a time when most members of the Saudi elite, including some in the royal family, were cowering under a sweeping crackdown against corruption and self-enrichment.

As it happens, Bader is a friend and associate of the leader of the purge: the country’s 32-year-old crown prince, Mohammed bin Salman.

The $450.3 million purchase is the clearest indication yet of the selective nature of the crackdown.

The crown prince’s supporters portray him as a reformer, but the campaign of extrajudicial arrests has been unprecedented for modern Saudi Arabia, worrying Western governments about political stability in the world’s largest oil producer, alarming rights advocates and investors about the rule of law, and roiling energy markets.

Mohammed’s consolidation of power has upended decades of efforts by previous Saudi rulers to build loyalty and consensus within the royal family. And even before the disclosure of the record-breaking purchase in a New York art auction by one of his associates, Mohammed’s extravagance had already raised eyebrows, most notably with the impulse purchase two years ago in the south of France of a Russian vodka titan’s 440-foot yacht, for half a billion dollars.

A spokeswoman for Christie’s, the auction house that sold Salvator Mundi, said it did not comment on the identities of buyers or sellers without their permission. Bader did not respond to a detailed request for comment.

But as the New York Times was pressing for a response Wednesday, the newly opened branch of the Louvre in Abu Dhabi, in the United Arab Emirates, tweeted that the painting “is coming to Louvre Abu Dhabi.” The Saudi crown prince is a close ally of his counterpart in Abu Dhabi.

Documents provided from inside Saudi Arabia reveal that representatives for the buyer, Bader, did not present him as a bidder until the day before the sale.

He was such an unknown figure that executives at Christie’s were scrambling to establish his identity and his financial means.

Even after he had provided a $100 million deposit to qualify for the auction, the Christie’s lawyers conducting due diligence on potential bidders asked him two pointed questions:

Where did he get the money? And what was his relationship with the Saudi ruler, King Salman?

Real estate, Bader replied, without elaborating. He was just one of 5,000 princes, he told the auction house, according to documents and people involved.

Less than two weeks earlier, on November 4th, the crown prince had ordered the crackdown on more than 200 of the richest Saudi princes, businessmen and government officials.

The kingdom had been squeezed by years of low oil prices, and Mohammed was seeking to recover hundreds of billions of dollars in alleged illicit gains.

Salvator Mundi represented a major prestige purchase in the art world, if a controversial one. Some experts questioned whether the painting was a true Leonardo. Some were simply unimpressed. The painting’s previous owner, Dmitry E. Rybolovlev, is a Russian billionaire who bought a $95 million Florida home from Donald Trump nearly a decade ago. Rybolovlev had paid $127.5 million for the painting in 2013 ? less than a third of its sale price last month ? and he is still locked in litigation with the dealer who sold it to him over that lofty price, among other transactions.

For Bader, paying such an unprecedented sum for a painting of Christ also risked offending the religious sensibilities of his Muslim countrymen. Muslims teach that Jesus was not the savior but a prophet. And most Muslims - especially the clerics of Saudi Arabia - consider the artistic depiction of any of the prophets to be a form of sacrilege.

Bader comes from a lesser branch of the royal family, the Farhan, who are descended from a brother of an 18th-century Saudi ruler. They do not trace their lineage to the founder of the modern kingdom, King Abdulaziz ibn Saud. But Bader is a contemporary of Mohammed. They attended King Saud University in Riyadh around the same time, if not together. And after Salman took the throne in 2015 and appointed Mohammed to run much of the government, he named Bader to high-profile positions, including one closely linked to the family.

The Salman branch of the royal family has traditionally controlled the Saudi Research and Marketing Group, which publishes the Pan-Arab newspaper Al Sharq Al Awsat and other publications.

After nearly 30 years of passing the chairmanship of the group from one Salman to another, Salman and Mohammed instead put Bader in the post.

In July, Salman also named Bader governor of a newly formed commission, led by Mohammed, to develop the province of Al Ola, which contains an archaeological site that the crown prince hopes to turn into a tourist destination. A government statement about the commission noted that the development of the province was important to the crown prince’s plans for the kingdom, known as Saudi Vision 2030, and last week the Saudi news network Al-Arabiya reported that Mohammed had posed for selfies there with locals while touring the desert on a four-wheeled buggy.

‘One of Saudi Arabia’s youngest entrepreneurs’

Bader sat on the board of an energy company that did business in Saudi Arabia, Energy Holdings International, according to its website, and a short biography there describes him as “one of Saudi Arabia’s youngest entrepreneurs.” (It was not immediately clear if the company was still operating.)

According to the biography, he is also “chairman of the founding committee” of a local consortium that won a license from the kingdom to build a fiber-optic network, in a “strategic partnership” with Verizon.

It is common for well-connected Saudi princes to profit by providing entry to the kingdom for international companies.

He is also described as one of the founders of a large recycling and waste-management business in Saudi Arabia. As for real estate, which Bader described to Christie’s as the source of his money, the biography says he “has also been active in real estate projects in Saudi Arabia, Dubai and the rest of the Middle East over five years,” including in partnership with “large reputed companies.” The date of the biography could not be determined.

Bader appears to have worked with Mohammed on at least one grand project for his own leisure, as well.

Together, the two approached Brent Thompson Architects, a firm based in Los Angeles, to design an elaborate resort complex near Jiddah, according to a description of the project on the group’s website.

It consisted of as many as seven palaces for princes in the Salman branch of the family, around an artificial body of water in the shape of a flower.

“Petals of this tropical flower formed a series of private coves, each the home of an individual palace, its own private beaches, guesthouse, gardens and water sports facilities,” according to the description on the firm’s website.

When the bidding opened at Christie’s in New York on November 15th, Bader participated by telephone and was represented in the room by Alex Rotter, co-chairman of postwar and contemporary art at the auction house.

At least three other anonymous bidders were competing by telephone through representatives in the room. Major dealers and collectors from across the art world had gathered to watch.

Bidding opened with a $100 million offer from an unknown collector, setting a floor for the auction. The bids started jumping in increments of $10 million and almost immediately reached $225 million, far surpassing the previous record for a sale at auction: the $179.4 million paid for Picasso’s Women of Algiers at Christie’s in 2015.

The price climbed further, in $5 million steps, reaching $260 million within two minutes after the auction began. Then, only two anonymous bidders were left, Bader and another person represented in the room by Francois de Poortere, the head of old master paintings at Christie’s.

The price rose slowly for a while, by increments of as little as $2 million. But after the bidding reached $330 million, Bader began to raise the price by increasingly large amounts.

The room erupted in gasps when he offered $350 million.

“Looking for another bid, please, Francois, at $350 million,” the auctioneer said, and the crowd laughed at his audacity.

Yet the bidding continued until, about 19 minutes after the auction began, Bader put it away with a $30 million jump, to $400 million. The final $450 million price includes additional fees paid by the buyer.

The prince had told Christie’s that he intended to pay in one lump sum upon completion of the sale. But in light of the unexpectedly high sale price, a contract was drawn up specifying six monthly installments.