Ardal O’Hanlon: On My Cultural Radar 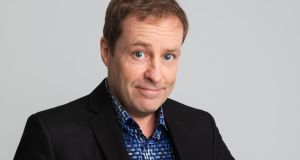 Ardal O’Hanlon: ‘I listen to WTF with Marc Maron, although I’m getting annoyed with him.’ Photograph: Mark Nixon

Current favourite book
The book I’ve enjoyed the most recently is Kevin Barry’s Night Boat to Tangier. He created a great double act, Charlie and Maurice, two gangsters reflecting on good and bad times in their violent and messy lives. Kevin Barry is always hilarious, always bleak, and taps into the darker corners of the Irish psyche, but still manages to write lyrically. Every paragraph is gorgeous, every line is quotable.

Restaurant
Delahunt in Dublin is reliable, I love it. And every time I pass through Soho in London, which is a lot, I eat in Bar Shu. It specialises in authentic Szechuan cooking, but it’s not like your normal Chinese – they have dishes like bird’s feet, which I always like to try. They use hundreds of those smoked, dried chillies in each dish, which has a physical effect; you leave with a numb face, sweating and feeling a bit sick, to be honest. But I’m drawn back to it; it’s a physical experience as well as a culinary one.

Play
I saw Shipwreck by Anne Washburn at the Almeida Theatre in Islington. It was a play about how to make sense of the Trump phenomenon. Two of the actors in it are friends of mine: Risteárd Cooper from Dublin, and Elliot Cowan, who I worked with in the summer. You have a group of middle-class people from New York examining Trump from every angle, and at the same time satirised liberal pieties. It was about four hours – we should have got medals coming out of there. But it was ambitious and engrossing, especially as I’m addicted to news and I hang on every outburst of Trump’s.

Artist
I went to see the exhibition of Edvard Munch, most famous for The Scream, in the British Museum. It was all about The Scream, and there’s not a person in the world who isn’t familiar with it, but that was the least interesting part of it to me, especially as I wasn’t familiar with the rest of his work. He does woodprints, which are sparse and full of emotion. Some of it’s quite morbid, too; he was fascinated by death. I’m using one of his paintings as the background image on my phone – I dumped the family and put that up instead.

Album
I love my punk, new wave and rock bands, but the album I’ve listened to most in the last year is Valerie June’s The Order of Time. She comes from a bluegrass background, and her voice is extraordinary. It’s a Tennessee-type drawl, but it can be quite raw, quite tender, and the music itself transcends genres; it’s beautiful and haunting.

Actor
Jodie Comer, who was in Killing Eve. She’s so talented, you just know she’s going to go on to do amazing stuff. I admire her ability to go from light to shade in the blink of an eye. It was an extraordinary performance.

Podcast
I listen to WTF with Marc Maron, although I’m getting annoyed with him, he’s a bit too intrusive and fawning. But he’s done some great interviews in the past, like with David Simon, the writer of The Wire, and Bruce Springsteen. He gets fantastic guests. I just wish he let them talk more.

TV show
I loved The Virtues, Shane Meadows’s miniseries on Channel 4, which I believe was inspired by a traumatic incident in his own life. It was one of the most absorbing dramas I’ve seen. It’s about the legacy of child sex abuse, and it’s based in Ireland. Even though we’ve had a reckoning with that over the last 20 years, and you think you’ve read it all and seen it all, this show explained the notion of repressed memory in a way that no other medium could. Shane Meadows directs very long takes and allows the actors to let the scene unfold, so you get completely engrossed in it. It’s really harrowing, obviously, but it avoids cliches. It’s a personal story, and you totally believe in it. All the actors, the children and everyone, are brilliant.

Film
The film that made the biggest impression on me recently was Midsommar, the horror film with Florence Pugh and Jack Reynor. It’s trippy and it’s a slow-burner. You never know where it’s going, but I love being surprised. It’s shockingly funny in places – funnier than a comedy film – although I’m not sure if it’s meant to be funny.

The Music Quiz: Which U2 video features an appearance of Boyzone?
6

Don McLean on the meaning of American Pie: ‘Who cares, who gives a f**k’
7

Plus: Bruce Springsteen covers, The Cure and Camus, when inspiration behind The Pogues' Fairytale in New York