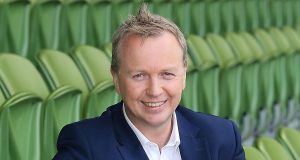 Call it the dull before the storm.

After three exhausting years of twists and U-turns, betrayals and backstopping, ennui rather than engagement is the order of the day as the Brexit saga goes to the wire – again.

On Wednesday, as negotiators frantically try to thrash out a last-minute deal and the DUP ready their torpedoes, Matt Cooper, host of The Last Word (Today FM, weekdays), captures the mood.

“I reckon less than a fifth of tonight’s programme is Brexit-related, in case you’re totally bored,” he reassures listeners, sounding pretty pleased with these proportions himself.

This isn’t an isolated incident. Earlier in the week, similar sentiments are expressed when journalist Ian Guider informs Cooper that most Irish businesses lack Brexit plans, despite many warnings.

“Are they not bored listening to you, me and everybody else speaking about Brexit?” Guider asks, presumably rhetorically.

Nevertheless, Cooper ploughs on, gazing into the ever-cloudy crystal ball of Brexit with journalists Daniel McConnell and Gavin Esler without sounding too jaded. He also keeps his eye on the wider ramifications of the issue, reminding listeners that that even if a deal is agreed, the outcome is still effectively a hard Brexit, with severe ramifications for trade.

But the presenter sounds more enthused dealing with other subjects, though the results are variable.

On Tuesday, he airs his public interview with former Ireland rugby international Jamie Heaslip, whose autobiography he has co-written. Cooper is understandably at ease with his guest, but after half an hour of Heaslip’s well-rehearsed dressing room anecdotes and blandly coded judgements on past managers, even Brexit begins to seem enticing.

More unexpectedly enjoyable is Cooper’s chat with novelist Emma Donoghue on her cultural highlights. The host sounds particularly curious about her television preferences, from her championing of soapy medical drama Grey’s Anatomy to her distaste for Game of Thrones as too “rapey”.

Cooper’s show may sometimes be squeezed between Mary Wilson’s Drivetime on Radio 1 and Newstalk’s Ivan Yates, lacking the resources of the former or the showmanship of the latter. But he’s savvy enough to realise there’s life beyond Brexit.

If Cooper sometimes seems a tad colourless compared to his rivals, it’s not necessarily a bad thing.

On Wednesday, American academic Brian Rosenwald tells Sean Moncrieff (Newstalk, weekdays) how US talk radio was worthy but dull until the arrival of right-wing shock jock Rush Limbaugh. Whereas established hosts such as Larry King allowed guests to steer proceedings, Limbaugh’s show was driven by his outsized personality and dyspeptic views on all things liberal.

“He broke the rules and reshaped the industry,” says Rosenwald. And more besides: Rosenwald observes that the “warfare mentality” of talk radio soon became the Republican party’s house style.

“This is how we get to Donald Trump,” he says, noting that while the US president wasn’t a classical conservative, he had the ethos of talk radio: “He’s a showman, he’s never boring, he’s often breathing fire.”

Despite this depressing endgame, it’s an offbeat but thought-provoking item, the kind that Moncrieff still does well – though after hearing that, the host might want to tone down his own instinct to entertain.

Meanwhile, those seeking respite from politics could just tune into 2FM, a frenetic pop paradise – or inferno, depending on your tastes – where Brexit scarcely exists. Instead, there’s celebrity gossip, madcap competitions – drivetime host Jenny Greene’s phone-in quiz is even called “Bonkers” – and zany trivia, such as Greene’s tidbit about a bag of sex toys being found in a sleepy English town.

Not that the real world is entirely absent. On Tuesday, Jennifer Zamparelli (2FM, weekdays) carries an interview with endurance athlete Ger Redmond that paints a bracingly stark portrait of Irish society.

A native of Darndale, Redmond recounts how his apprenticeship as a professional footballer was cut short when his father was imprisoned and his “unstable” mother left home, leaving him as the teenage provider for his siblings. Soon, he became involved with local criminals – “I felt if I get in with them, we might be safe” – embarking on a path which led to imprisonment, before Redmond turned his back on crime.

As befits the snappy atmosphere of Zamparelli’s show, Redmond’s tale of redemption is ultimately uplifting – he is now an “iron man” triathlete – but it’s his candour that’s really striking. Despite the extremely challenging circumstances of his youth, he is unflinching about his younger self, ascribing his use of drink and drugs to resentment and lack of values.

He is even more excoriating about criminal life. His account of prison’s Hobbesian environment is matter-of-fact but quietly terrifying.

He reveals the grim daily reality for many people in Ireland, one that is too rarely discussed elsewhere

Later, following the death of an old friend, Redmond had a “lightbulb moment”, realising the negative impact his activities had on his own children. He skewers the rationale of career criminals – “you say you’re doing it for your family” – as “bullshit”, saying that it’s ultimately down to ego.

Zamparelli’s interviewing style is an odd fit for such subject matter, veering between concern and peppiness. But she clearly puts her guest at ease.

As for Redmond, his honesty speaks of his strength of character, as does his decision to leave his old life behind and embrace a gruelling new vocation. Just as crucially, he reveals the grim daily reality for many people in Ireland, one that is too rarely discussed elsewhere. That such a tale should be heard in the unlikely surroundings of Zamparelli’s 2FM show suggests that too much political discourse isn’t just boring, it’s out of touch.

Radio Moment of the Week: No need for modesty

Inspired by Jonathan Swift’s work of (nearly) the same name, My Modest Proposal (BBC Radio 4, Wednesday) features six Irish poets looking at contemporary Ireland’s problems through the prism of the author’s biting 1729 satire, which suggested the poor sell their infants as food.

The poets all bring a similarly wry rage to their contributions. Sarah Clancy and Kevin Higgins in particular invoke the spirit of Swift as they respectively deal with species extinction and homelessness, while Mary O’Malley echoes the author’s savage absurdism in her poem proposing that all people over 66 be issued with biodegradable coffins, the better to vacate their much-needed homes. Poetic, playful and polemical, it’s an imaginative vision of modern Ireland. That it can only heard on a British radio station is, of course, another matter.

Galway 2020 reinvents itself in safe mode for Covid era
10