All Together Now 2019: Everything you need to know 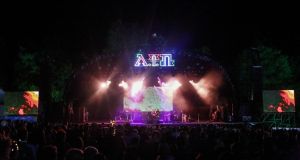 All Together Now: the festival of the summer for music fans who have outgrown Electric Picnic and Forbidden Fruit

This is the festival of the summer for music fans who feel they have outgrown (to put it kindly) Electric Picnic and Forbidden Fruit. Created in 2018 by the late John Reynolds, who also founded Electric Picnic, Forbidden Fruit and Metropolis, All Together Now gives Curraghmore Estate, in Co Waterford, over to a weekend of rock, hip hop, ambient techno, neosoul, reggae, folk and synth pop. It also puts sustainability at its heart, reflecting the forward-thinking mindset of its audience.

The three-day festival’s music headliners are The National, Patti Smith, Father John Misty and Hot Chip. They’re supported by Fontaines DC, Bombay Bicycle Club, Neneh Cherry, Loyle Carner, The Wailers, Kojaque & The Soft Boy Band, Anna Calvi, Erol Alkan, Saint Sister, Bedouine, Soak and Pillow Queens, among many others. (Pussy Riot, if you were hoping to see them, have pulled out.) The comedy line-up includes Tommy Tiernan, Jason Byrne, Deirdre O’Kane and Colm O’Regan. Some of them will be teaming up with authors, actors and spoken-word artists, including some household names, for the festival’s All Curious Minds strand.

When do they play?

All Together Now begins on Friday, August 2nd, and runs until Sunday, August 4th.

The car park opens at 10am on Friday. (Holders of camper-van tickets can arrive from 6pm on Thursday.) The campsite opens at noon on Friday.

By car Aim for the blue gate if you’re staying in the regular campsite or if you’re being dropped off, whether by car, taxi or private bus. Aim for the red gate if you have a family camping ticket, prebooked camping (Pod Pads and Tangerine Fields) or a camper-van ticket. Both of these map links show where the gates are, but the organisers point out that your route access will be determined by the Garda’s traffic-management plan. And if you’re coming from the Dublin area, leave time to get through the roadworks on the M7 around Naas, in Co Kildare.

By coach Bus Éireann is running festival services from Dublin, Cork and Waterford.

By train If you take one of Irish Rail’s regular services to Waterford you can then switch to Bus Éireann’s shuttle service to the festival site, from the bus terminal just across the river from Plunkett Station.

By bicycle Both festival gates have bicycle parking. Organisers urge you to wear a helmet and luminous clothing, to use lights, and never to drink and cycle.

By GoCar The car-rental club, which has vehicles at 500-plus locations around Dublin, Galway, Cork and Limerick, is offering festivalgoers weekend rates of €160-€180. (Its €140 deal for fully electric Nissan Leafs has sold out.)

By car-sharing If you have room in your car for another passenger, or are looking for a seat in somebody else’s car, you can use All Together Now’s GoCarShare page to advertise or to find a lift.

The festival ends on Sunday night, and you need to leave by noon on bank-holiday Monday.

No. The 20,000 tickets sold out long ago. The organisers warn anybody who’s still looking for a ticket to beware of counterfeits.As ever, buy from accredited sources only.

Úna Keane: In the Deep review – out of time but also timeless
10